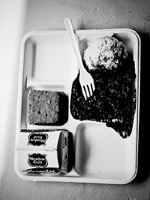 For generations, students have complained about school food, calling it “mystery meat.” More recently, their elders have begun complaining too, as rates of childhood obesity and Type 2 diabetes reach new highs, and unhealthy school lunches are targeted as one cause. As Congress gets ready to debate possible changes to federal child nutrition programs, criticism of the byzantine structure of children’s meal program regulations is starting to be heard as well. But is anyone listening? On August 6th, they were listening in San Francisco.

The U S Department of Agriculture held an all day listening session at the Federal Building on Seventh Street, one of 7 sessions being held around the country this summer, to collect public comment for Congress in anticipation of the reauthorization of the Child Nutrition Act in 2009. On hand were more than 100 parents, students, teachers, school nutrition program directors, cafeteria workers, vegans, food policy wonks, representatives of City government, and marketers promoting everything from canned peaches to soy.

The complex USDA regulations for child nutrition programs were attacked by many speakers. Margaret Brodkin, Director of the City of San Francisco’s Department of Children, Youth, and their Families, called the City’s summer lunch program, run by her department, a “bureaucratic nightmare.”

“The regulations sound like they are designed to keep us from feeding kids!” she declared. Brodkin then announced that she might have to discontinue the popular program, which feeds 5,000 hungry children a day at about 100 sites, next summer because of the difficulty of complying with complex regulations that deny a child a meal if he shows up even a few minutes after the scheduled mealtime. When the summer lunch program gets “dinged” too often for minor violations of federal child nutrition program regulations, it jeopardizes all of the Federal funds the City receives, according to Brodkin.

SFUSD parent Caroline Grannan testified, “A huge percentage of those regulations are aimed at making sure that only officially qualified students get free or reduced-price lunches, because God forbid the wrong hungry kid gets fed. Vast resources are devoted to this effort – to counting and claiming and qualifying and spot-checking those intimidating meal application forms. I propose that we stop treating kids like potential cafeteria criminals and that the National School Lunch Program simply cover school meals for all students.”

Parents from San Francisco Unified raised the issue of the reimbursement rate for free meals being too low in high cost of living areas like SF, while the cutoff for eligibility for free meals is also too low, leaving many poor families unable to qualify. Because these rates are the same for the 48 states (Alaska and Hawaii have higher rates), a family of 4 with 2 school aged children would not qualify for free meals if their income was higher than $39,220. That sum may be sufficient for a family in Kentucky, said parents, but in SF, that family would need to earn more than $53,000 in order to live without government assistance, according to the Insight Center for Community Economic Development.

Lowell High School student Jacob Schreiber called for more money for school meal programs so that higher quality food could be served, and more workers hired to speed lunch lines. SF Board of Education member Jill Wynns described the many improvements made to school food in San Francisco since 2002, but characterized these improvements as having happened “in spite of a school food funding system from the Dark Ages.”

Ann Cooper, who runs the highly acclaimed meal program in the Berkeley Unified School District, proposed that oversight of child nutrition programs be moved from the USDA to the Department of Health and Human Services, so that children’s health would be seen as the top priority.

“When it comes to our kids’ health, we can either pay now, with more money for healthy school food, or we can pay later, with huge increases in the costs of caring for these kids suffering from obesity, diabetes, and heart disease.”

Are you listening, Congress?

The USDA will continue to collect public input on child nutrition programs through October 15th; to find out how to make your voice heard, please visit http://www.pasasf.org/cna/index.html

Dana Woldow has worked on school food issues in San Francisco since 2002, and is co-chair of the SFUSD’s Student Nutrition and Physical Activity Committee. She is the parent of one current SFUSD student and two SFUSD graduates.