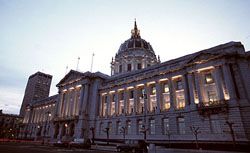 Bodies are moving in San Francisco city government, and new personnel shifts could be announced as soon as this week. When the quiet departure of Joyce Neustadt, once the Mayor’s top policy advisor, was followed by the removal of the popular and loyal Joe Caruso from the Mayor’s Office of Neighborhood Services, it became clear that few top appointees are safe. Now the Mayor is looking for a “good fit” i.e. a new job for Chief Administrative Officer Bill Lee, and insiders believe that Matt Franklin, who has been Director of the Mayor’s Office of Housing for less than a year, will soon become head of the Redevelopment Agency’s housing division as well, if not the entire Agency.

After a year in office, Mayor Newsom wants to change the faces in his Administration. After a high-profile fight that led to the removal of Gerald Green as Planning Director last October, Joyce Neustadt, once the Mayor’s top policy advisor, left her position without the accompaniment of as much as a press release thanking her for her service.

Two weeks ago, Joe Caruso, who worked tirelessly to elect Gavin Newsom as Mayor, was unceremoniously dumped from this beloved position as head of the Mayor’s Office of Neighborhood Services. Caruso was exiled to the Office of Emergency Services, where he joins former Supervisor Ann Marie Conroy, herself in exile from her prior job as chief honcho of Treasure Island.

The potential shifting of CAO Bill Lee is both surprising and understandable. It is surprising because Lee has broad political support among the Asian voters that helped put Newsom in office, and it is a constituency the Mayor continues to focus attention on. I am unaware of anybody in San Francisco who does not like Bill Lee or would want him removed from his current position (few even know what the CAO does).

But Lee’s possible departure is understandable for two reasons. First, Mayor Newsom ran on a campaign of change and he wants to install his own people in leadership positions. Second, Lee has a political base independent of the Mayor’s, and Newsom has not shown that he wants independence from his Department Heads or other administrative appointees.

Matt Franklin is clearly a favorite of Newsom’s, though he remains little known in the city. Joe LaTorre, the most knowledgeable staffer at the Mayor’s Office of Housing (MOH) for nearly two decades, quietly left the office in December. As with Neustadt, no press release accompanied LaTorre’s leaving; his departure only became known from his auto e-mail response.

At the start of Mayor Newsom’s tenure, Daryl Higashi and Joe LaTorre brought nearly forty years of local housing development experience to the Mayor’s Housing Office. Higashi is now at DHS, and LaTorre no longer works for the city.

From a fiscal perspective, giving Franklin control of the Redevelopment Agency’s housing division makes sense. Federal housing cutbacks and the failure of voters to pass Prop A means that there is less money for MOH to administer. Meanwhile, the prospect of a Mid-Market Redevelopment Area means that the Agency will have the largest say in the allocation of affordable housing funds.

Since Newsom’s election it has been no secret that he would replace incumbent Redevelopment Agency head Marsha Rosen no later than May 2005. As this date
nears, the Agency Commission has not engaged in a formal search, leading many to conclude that Newsom will appoint a Director from within city government.

Some sources close to Newsom say Franklin could be tapped to run the entire Agency; others believe mayoral chief of staff Steve Kawa would oppose such a move so it will not happen. It probably makes little difference, as the Mayor has already made clear that he will be deciding which population is served with the city’s affordable housing funds.

Newsom is the first Mayor in over forty years who was strongly and actively backed by his predecessor. This puts him in the delicate position of wanting to staff his Administration with his own choices, even though this means replacing administrators who often campaigned for his election and see themselves as on the mayor’s “team.”

Some high-profile Department Heads under Mayor Brown—such as Health Director Mitch Katz—have become invisible in the Newsom Administration. Other Brown holdovers, like DPW’s Ed Lee, regularly appear at press events with the Mayor and yet are still rumored to be on shaky ground (though if the Mayor replaces Bill Lee, Ed Lee is likely safe).

Newsom’s top appointment priority should be a new Planning Director, as there are currently record delays in processing the development projects the Mayor is counting upon to provide the tax revenue to fund his programs. But it seems that those predicting that interim Planning Director would stay on for a year may be proved correct, as the world-class Planner the Mayor claims to be seeking remains nowhere in sight.

It’s easy to remove Department Heads; it is much harder to find quality replacements.