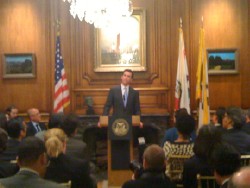 The Board of Supervisors will vote today to amend the Mayor’s budget – as they push alternatives to a proposal that cuts health and human services while giving cops and firefighters a raise. City workers will be out in force on both sides – with the front of City Hall hosting dueling rallies between SEIU (which represents health care workers) and the Firefighters Union. This conflict is more than what Gavin Newsom bargained for when he released his budget plan on June 1st. The Mayor had hoped to campaign for Governor by saying he balanced the San Francisco budget without raising taxes, or laying off police and firefighters. But doing so required deep cuts to health and human services (beyond what may still come from the state), prompting a backlash that may hurt his ambitions. Candidate Newsom also wants the U.S. Census Bureau to count gay couples, but his budget under-funds the City’s 2010 Census effort – which could cost San Francisco millions after he leaves office.

Yesterday, I got two e-mails in my inbox within minutes – both of which announced a rally in front of City Hall today before the Supervisors have their meeting. One was to support (while the other was to protest) a motion on the Board’s agenda to amend the Mayor’s interim budget – taking a total of $82 million out of the Police, Fire and Sheriff Departments as a means of restoring cuts to Public Health, Human Services and Parks.

One rally – organized by SEIU, and City-funded non-profits that serve the poor – calls for a “more equitable budget.” The other one – organized by the Firefighters Union – is a “rally for public safety” to “save our firehouses.” The Mayor’s budget has no layoffs in the Fire or Police Departments, giving these City workers a raise – while other agencies get decimated. The Supervisors want to alter the Mayor’s proposal, so that every City department “shares the pain.” When cuts are inevitable, we need to first find waste …

At today’s Board meeting, the Supervisors will also approve a series of M.O.U.’s with various labor unions that represent City workers – all of whom were asked (and agreed) to concessions in order to balance the budget. Conspicuously absent, however, is the Firefighters Union. The union has said it will “give back” part of its contract, but was the only set of City employees who said this was conditional on what the Board does to the budget. One point of contention is whether the Supervisors will push “rolling brownouts.”

San Francisco has 45 fire stations – for a 49 square-mile city. In the past during tough budgets, the City has closed stations temporarily (“rolling brownouts”) when they were not being used. The Firefighters Union opposes brownouts, and even went to the ballot in 2005 to overrule the City. In other words, we can shut down health clinics for the poor – but the Fire Department needs all 45 stations to remain open on a 24/7 basis. While a fire can happen at any time, brownouts can happen without jeopardizing public safety.

The Fire Department wastes its resources. Last Friday, one block from my office in the Tenderloin, a homeless woman was injured on the sidewalk – and a police officer called for her to get medical assistance. A fire truck showed up with four firefighters, although there was no danger of a fire – and all she needed was an ambulance (which also arrived.)

Sadly, this incident that I witnessed happens all too frequently in San Francisco – and illustrates how the Fire Department wastes money. Consider this when the Firefighters Union says they are the “front-line for homeless people” by taking them to the hospital.

For the first time in recent history, the Mayor’s budget gives the Fire Department more General Fund money than the Human Services Agency. Newsom political consultant Eric Jaye also works for the Firefighters Union, although he has denied lobbying the Mayor on their behalf.

Of course, doing so would be illegal. Section 2.117 of the Campaign Government & Conduct Code bans political consultants from lobbying their elected clients for other clients. But even without direct lobbying, one can argue that Jaye’s affiliation with the Firefighters Union (though perfectly legal) amounts to undue influence on the Mayor.

On the other side, you have Health and Human Service employees. These groups face deep cuts in the Mayor’s budget, and could lose even more if additional state cuts come to pass. At a noon press conference in Chinatown yesterday, a group of City-funded non-profits called on the Supervisors to hold firm. Speakers made it clear they respect the Police and Fire Departments, but everyone must “share the pain” in tough times. Each group came up to describe their services, and the cuts they face.

The Supervisors will hear from many of these groups today at its Beilenson hearing, a state mandated hearing for proposed public health cuts to indigent clients. Such proposals in the Mayor’s budget include a 10% cut in HIV/AIDS housing subsidies, $3.6 million in cuts to community-based mental health programs, half a million in HIV prevention and benefits counseling, privatizing Jail Health services and security guards at San Francisco General Hospital, and a plan to eliminate all four SRO Collaboratives – which cost the City a combined $750,000.

Every year, we see many of these cuts are in the Mayor’s budget – and every year the Board scrambles in a reactive way to save as much as they can. With this year’s fiscal crisis being our worst since the Great Depression, Supervisors are seeking a pro-active approach by amending the interim budget — taking a more holistic approach to a $6.6 billion budget.

Newsom publicly attacked the Supervisors after the Board’s Budget Committee moved to amend his proposal last week, taking $82 million out of the Police, Fire and Sheriff Department budgets. “This board acted without my understanding of their intent,” he told the Chronicle. “It’s a very dangerous game. I don’t know what they’re trying to do. I am stunned. Thank God we have a mayor.”

But the Mayor had plenty of notice this was going to happen. Board President David Chiu even took time out of last week’s Budget Committee meeting to walk across City Hall to Room 200, meet with Newsom and tell him what they were doing. According to Chiu, the conversation was amicable – and the Mayor did not react emotionally.

It wasn’t until the following day that Newsom lashed out at the Supervisors in a press conference. Chiu told the Chronicle he was “surprised at the Mayor’s emotional reaction to a legitimate, genuine policy debate. When he calms down, I look forward to working with him to develop a budget that reflects our shared policy priorities.”

Newsom also had notice before, because the Board passed in May a list of budget priorities, intended to give the Mayor some guidance when he crafts his budget. I even asked the Mayor on June 1st when he presented his budget if he had incorporated some of the Supervisors’ priorities. Newsom said he had considered them, but chided the Board by saying he had already started working on this before getting them.

Sadly, this is typical of how Newsom treats the legislative branch – like he did with the MTA budget and the mid-year cuts. Rather than welcome a debate about how best to balance the budget, it’s like he feels threatened by people he disagrees with. If this is how Mayor Newsom treats the Board of Supervisors, how would a Governor Newsom treat the state legislature?

When the Mayor unveiled his budget proposal on June 1st, the audience was not the City of San Francisco – but the state of California. Newsom emphasized that he would balance the budget without raising taxes or laying off police, firefighters or teachers – a platform that sells well in a gubernatorial run.

But the only way that was possible was to make drastic public health cuts – a point that he downplayed throughout his presentation, as he quoted numbers that were wrong. He could have gotten away with it, but the Supervisors fought back. Now, as City workers fight over crumbs in the budget, the issue can hurt his statewide ambitions — unless he shows leadership by convincing the Police and Firefighters that everyone needs to sacrifice in these tough times.

In his campaign for Governor, Newsom is using many of the same PR moves that served him well as Mayor. Most California Democrats know him as a champion for marriage equality, so he got some good press for requesting that the U.S. Census start counting same-sex couples. Ironically, the Mayor’s budget drastically underfunds what the City should be paying for the 2010 Census – which could jeopardize our ability to get federal money.

For the last Census in 2000, San Francisco spent $650,000 – which included grants to 14 community organizations that work with hard-to-reach populations. Even that effort missed 100,000 people, and the City has lost $270 million over the past ten years in federal funds as a direct consequences. Under Newsom’s budget, the City will only spend $300,000 for the 2010 Census – and none of this money will go to non-profits.

EDITOR’S NOTE: Beyond Chron is published by the Tenderloin Housing Clinic, which runs the Central City SRO Collaborative – and whose law office does Ellis Act eviction defense for low-income tenants. Both programs are proposed to be cut.