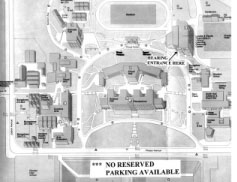 City College held a hearing yesterday on its proposed Master Plan to guide future campus development at its Ocean Avenue Campus. Unfortunately, the Master Plan and EIR propose to use academic funds, instead of parking fee revenue, to add nearly 500 parking spaces to the existing 2,200 spaces. The College provides no similar subsidy for transit users, although 44% of students, faculty and staff use Muni & BART to get to school.

City College’s new master plan threatens to increase tensions between the institution and the surrounding neighborhood over parking and traffic issues.

At a time when community college fees are increasing and classes are being cut, the plan calls for spending at least $10 million in scarce academic funds to add 500 parking spaces to 2,200 already on site, while doing nothing to encourage its students and faculty to use transit, walk, or bicycle, or even reward the 44% of visitors to the campus that already use transit.

Transportation for a Livable City, a nonprofit dedicated to creating more livable neighborhoods through reduced car dependence, said that the campus could meet all its future parking demand by using the existing spaces more efficiently, and canceling the parking subsidies that come at the expense of academic funds. University of California and California State schools are barred by law from using academic funds for parking.

The San Francisco Bicycle Coalition asked its members to protest the lack of attention to bicycle safety, saying that City College didn’t want to provide bicycle parking or consider bicycle lanes “on the logic that few people currently bike to campus, so there’s no reason to do anything to encourage more people to do so in the future.”

According to Hill, neighborhood residents were supportive of bicycle access to the campus. “There’s no excuse for all these cars. These students need to be bicycling here,” said a merchant and member of the Ocean Ave. Merchants’ Association.

Jeremy Nelson, of Transportation for a Livable City, contrasted City College’s encouragement of car traffic with the transportation plans of Alliant International University, which is building a new campus in North Beach, where traffic is even more congested. AIU is building no new parking, instead providing incentives for their faculty and students to take transit, walk, or bicycle. “AIU correctly recognizes that parking demand is a dynamic value, responsive to the incentives, prices, and quality of other travel modes, rather than a static value.” City College, according to its draft master plan, intends to continue policies to increase parking demand, and worsen the impact of traffic in the surrounding residential neighborhood.

The board of Trustees is having another hearing on the plan on May 20. They vote on May 28. You can contact the Trustees by emailing Peter Goldstein, CCSF Vice Chancellor, at pgoldste@ccsf.edu.

Dave Snyder is the author of “Transportation
for a Livable City”