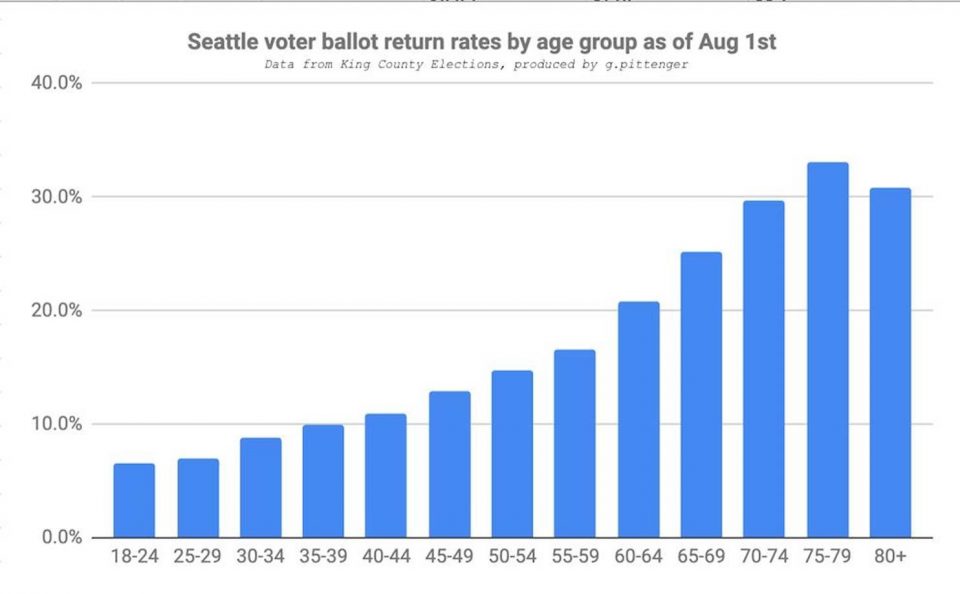 Today is Election Day in Seattle.

Wait, you’re wondering why a progressive city elects Council members during summer vacation? A time when students are gone? A time that disproportionately empowers older white homeowners with a greater economic stake in city politics?

I agree with you. Seattle’s election timing makes no sense. A blue city should not be minimizing voter turnout from tenants, people of color, and low-income residents.

If Seattle held council races in November 2020 or 2022,  it would bring a far more racially, ethnically and age diverse electorate to the polls. An electorate eager to address high housing costs. One which supports bike lanes, public transit and other strategies to combat climate change.

But it is August. The students filling the streets of the U District surrounding the University of Washington are gone. Seattle’s August election sharply reduces the student vote.

Seattle has many top-notch progressive candidates running for council who support infill housing, bike lanes and other urbanist strategies. And some may win despite the election timing. But there prospects would be stronger if this overwhelmingly Democratic city did not rely on a voter calendar that disempowers younger voters.

Voters who are more likely to be tenants and people of color.

In Generation Priced Out: Who Gets to Live in the New Urban America I urge housing and tenant advocates to coincide local Council races with state and national contests. These races have much higher voter turnouts. I describe how this shift impacted Santa Monica politics and in 2020 will start reshaping  Los Angeles’ City Council.

Los Angeles is a case study of how off-year local elections disproportionately empower older white homeowners who oppose new apartments. In 2013, turnout was only 20% in the hotly contested mayor’s race won by Eric Garcetti. It was an abysmal 12% in March 2017.

The Los Angeles City Council has long opposed the new multi-unit housing the city desperately needs because the older white homeowners who dominate the low-turnout, off-year electorate oppose new apartments. Councilmembers feel accountable to the electorate, not the Latinos, tenants and younger voters being priced out of the city who do not vote in large numbers in these off-year contests.

Los Angeles new local election cycle has already brought Sarah Kate Levy, a strong pro-housing activist, to launch a 2020 campaign. Kevin De Leon is also running for a Council seat, and would become a strong pro-housing voice. Incumbents are always difficult to defeat but as seats open up Los Angeles council candidates will increasingly defer to the policies of their entire districts, rather than only a small segment.

There will be no photos of empty polling places in Seattle today. That’s because Seattle’s off-year elections are all-mail. Voters have ten days to return their ballots. The August election is a primary, with the final election in November when students are back in town.

Before getting excited about Seattle’s mail election, California elections give people thirty days to vote by mail and the ability to vote in person on Election Day.

Mail voting also hurts tenants who move and either fail to register at their new address or do not get the mailed ballot. On June 26 the Seattle Times reported that apartment numbers on mailed election materials did not appear. This raised concern that as many as 25% of Seattle voters might not get a ballot. It is unclear whether this has been resolved. But getting election mail in large apartment buildings is always a challenge compared to the single-family homeowner whose ballot goes directly into their mailbox.

Elected officials are key to creating a more affordable and environmentally sustainable urban America. In Oregon, state legislative leaders passed statewide rent caps, just cause eviction and ended single-family zoning. In California, AB 1482 which would do the first two is still up in the air and efforts to legalize fourplexes and increase density via SB 50 were shelved.

Cities will not move forward if they continue to have their political decisions made by those elected by disproportionately older white homeowners. It simply makes no political or policy sense not to align local races with state or national contests that generate higher voter turnout.

Julia Pyper’s Political Climate podcast (@Poli_Climate) recently reported on low voter turnout by environmental voters. But is it the fault of green student voters in Seattle that an election is held when they or out of the city? Or that elections are held in other cities where students do not get much information on local candidates/issues and so are less likely to vote?

I’ve seen in Berkeley what a huge difference in student turnout occurs when local elections are aligned with state or national. We need young environmentally conscious voters to participate—so let’s make it easier for this to happen!

Note: I’ve learned since posting that the Washington legislature or more likely a state ballot initiative would have to align Seattle elections. Unlike Los Angeles, the city cannot do so on its own. I’ve also learned that efforts toward a state ballot measure are moving forward.