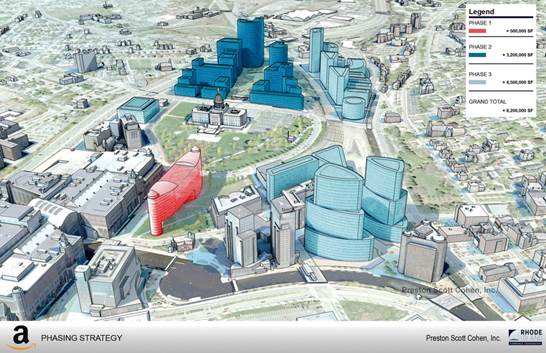 As cities offer secret bounties to become Amazon’s second headquarters, the aggressive recruitment raises a question that all high housing cost cities involved should be asking: Where will Amazon’s new employees live?

None of the twenty cities have demanded Amazon build new housing. So as many as 50,000 highly paid employees could flood the rental market of a city that already suffers from an acute housing shortage.

In other words, the city that “wins” Amazon will lose a lot of its current economic and racial diversity, as well as its future working and middle-class. Say goodbye to more baristas and teachers in urban America

For “progressive” high housing cost cities like Austin, New York City, Washington D.C., Boston and Chicago to be recruiting Amazon without a housing commitment conflicts with stated policy goals. As urbanist Richard Florida put it, mayors that claim to be trying to reduce inequality and make more inclusive cities are now “in a game competing with one another to throw money at one of the most powerful companies in the world run by one of the world’s richest men.”

My upcoming book, Generation Priced Out: Who Gets to Live in the New Urban America,  describes how “progressive” cities promote land use policies that reduce inclusion and diversity.  So I am disappointed but not surprised to see many of these cities recruiting Amazon despite their current housing crises.

It’s not as we cannot predict the housing impacts of Amazon’s second headquarters. Seattle has gone through a housing cost explosion due to an Amazon hiring frenzy that had the company advertising for 9000 new jobs a month. Seattle builds housing more aggressively than almost any high housing cost city but no city can produce housing  faster than it takes for a company to offer a new job.

Austin, a leading contender for Amazon, has also seen skyrocketing housing prices in recent years. The city just pulled the plug on a multi-year land use revision process (Code NEXT) designed to increase density and build a lot more apartments, an outcome vigorously fought by homeowner groups insistent on barring tenants from their neighborhoods.

If Austin wins Amazon, thousands of new workers will be seeking housing within the city’s already scarce supply. A city that officially bemoans the loss of its working class Latino and African-American families would be accelerating this trend (Austin has no just cause eviction protections, which are barred by Texas law).

New York City’s pursuit of Amazon is actually consistent with Mayor Bill de Blasio’s housing agenda. The mayor talks inclusion and diversity while promoting policies that undermine both. There’s a reason New York City’s African American and Latino communities are up in arms against de Blasio’s upzoning plans for their neighborhoods, which promote gentrification and displacement.

Since the dot com boom of the late 1990’s, San Francisco has been dramatically impacted by major corporations building office space for thousands of new workers without providing housing. San Francisco had no power to secure accompanying housing since these new jobs were primarily outside the city in Silicon Valley.

But now San Francisco is rezoning a vast stretch of the city adjacent to downtown that planners have renamed, “Central SOMA.” And as I described in March, “Central SOMA Exposes SF’s Political Identity Crisis,” the original proposal sought to add 40,000-50,000 new jobs and only 7000 housing units.

Thanks to the YIMBY movement, word of this outrageous jobs/housing imbalance began to spread. Soon after my article Supervisors Aaron Peskin, Jane Kim and London Breed all announced that more housing was needed in the plan. Now Mayor, Breed has publicly pushed both to expedite the housing approval process in the area and to maximize the number of housing units allowable under the current environmental impact report (adding roughly 1200 more units).

Will the city  winning Amazon ultimately follow San Francisco’s new Central SOMA approach and connect the new headquarters to a requirement for new housing? It may have no choice. After all, since the public has been kept in the dark around the Amazon negotiations activists’ demand for accompanying new housing—whether from Amazon or funded by the city itself—is likely to gain political momentum.

Amazon’s arrival will also once again show how progressive cities can adopt policies to either slow or accelerate the pricing out of their working and middle-class. Accepting Amazon without adding new housing reflects the latter strategy.

There is nothing “inevitable” about the loss of urban inclusion and diversity; it is a question of political will.

Randy Shaw is Editor of Beyond Chron. His upcoming book, Generation Priced Out, will be released in mid-October from the University of California Press.