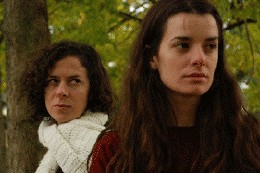 An encyclopedic anti-genre film, a dark comic drama about the Balkan Wars, and an elegantly melancholic tale of unhealed love were among the cinematic delights offered by the recently concluded 19th Cinequest Film Festival in San Jose.

The three tales of the Argentine film “Historias Extraordinarias” each ironically began with boringly mundane openings. One man was walking apparently aimlessly along a country road. Another man is traveling by bus to a new if unexciting job. The last man is paddling his boat down a fog bound river. Yet over the course of more than four hours, these three men will collectively be involved in a trip into psychological madness, a love triangle or two, and the story behind a notorious mass murder/robbery.

Despite these familiar genre storytelling elements, director Mariano Llinas constantly thwarted the genre film-conditioned viewer’s expectations. These three tales were not interconnected in any shape or form. The protagonists did not evolve into masters of their respective stories, but instead remained somewhat wrong or even clueless. One character’s theory about the high-profile disappearance of a vanished wife turned out to be totally offbase. Finally, tidy and clear endings remained absent from this film, even with a supposed chance encounter.

Llinas’ frustrations of viewer expectations did not detract from the film, but rather supported its point. The Argentine writer/director rebelled against the types of lives or destinies plotted through by society and personal inclination to tediously predictable ends. This rebellion led Llinas to take his ordinary characters out of the boxes created by daily routine or job limitations and plunk them into bigger worlds outside themselves. Whether these characters would take advantage of the emotional freedoms offered to them was a different matter.

Llinas’ decision to ignore genre expectations sometimes worked against him. Having X stay in the hotel room for a good part of the movie rendered his story static, even with the thematic nod to Cornell Woolrich’s famous story “Rear Window.” The most patience-trying sequence was probably the shots of H walking through endless fields of river reeds.

Despite its occasional faults, “Historias Extraordinarias” never succumbed to the type of pretension associated with films with omniscient narrators and central characters that only have single letters for names. Instead, its playful cinematic mash-up of genre stories reminded the viewer of the emotional appeal of such stories before conventions ossified their heart. This $50,000 shoestring-budgeted film ultimately demonstrated the type of emotional life missing from films budgeted 100 or even 1,000 times more.

That collision between the fantasies represented by the actors and the gritty realities of a country splitting into mass madness was played for both dark comedy and terrible tragedy. The jaunty theatrical woodwind theme music played over footage of shell-ridden streets felt reminiscent of wind whistling through a graveyard. Yet without that ongoing collision of realities, the viewer’s mind might have been overloaded by the many horrors Markovic captures in his film. Serving tea in bloodstained cups was just the least of such horrors.

“The Tour” wasn’t mocking the power or value of art. Markovic sees art as a reminder and preserver of the better angels of people’s natures. But the film’s creator/writer/director also showed how art’s power to stir people’s feelings can be twisted to make even genocide palatable.

Audience members familiar with the old “Babylon 5” TV series will recognize Mira Furlan’s name among the cast. Furlan’s hot-tempered Sonja may not make viewers forget her earlier role. Yet the minefield torture sequence showed how her character lost a piece of her soul.

“The Tour” was far from a perfect film. A monologue about the difficulties of doing an honest film about the Balkan War should have been modified from its original source. However, one suspected a character’s sincere declaration that the Serbs are an inherently divine people oppressed by the CIA might not be that far from reality.

Markovic’s film may fail to offer any soundbite-sized insight or wisdom into the Balkan conflicts. But maybe being a helpless witness to mass madness could bring its own moments of understanding.

“Esther’s Inheritance” was director Jozsef Sipos’ elegantly melancholic adaptation of beloved Hungarian author Sandor Marai’s novel of the same name. This remembrance of a years-old emotional crime brought a sense of Greek tragedy to its quietly crumbling Hungarian estate. The viewer repeatedly knew how Lajos wronged the titular character in the past. Yet why was that awareness insufficient to prevent the painful robbery that Esther writes about? Answering that mystery provided the narrative hook for the film.

Gyorgy Cserhalmi’s performance as Lajos explained in part why Esther and her friends acted against their better nature or proved impotent. Lajos’ charismatic self-confidence acted as an emotional skeleton key which could unlock even the most guarded heart. Even Esther’s hostile cousin Nunu looked momentarily impressed at Lajos’ gift to her.

Yet the story’s quietly oppressive atmosphere of death played a greater influence on the titular character’s actions. Her life was not one of enjoying the moment but one quietly spent in the shadow of losses past and future. Her possession of the family estate was one marked by serious financial hardship. Esther’s beauty had long passed its prime. Could it be said Lajos’ visit marked for his former lover the chance to finally commit emotional suicide?

Viewers may also wonder what the titular inheritance may be. The only fair hint that can be given is that it’s nothing material. As to its real nature, one needs to watch the film or read Marai’s book.