Cinequest 21 — “War Games & the Man Who Stopped Them,” “A Perfect Solider,” “Irena Sendler: In the Name of Their Mothers” 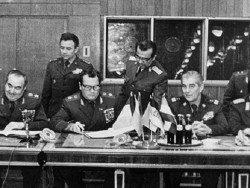 Was Colonel Ryszard Kuklinski a traitor to the Polish Army, a hero who helped avert World War Three, or both? Kuklinski is the titular man in Dariusz Jablonski’s dramatic documentary “War Games and the Man Who Stopped Them.”

This Polish film introduces to Westerners the story of one of the Cold War’s unsung heroes. In the 1970s, the Warsaw Pact’s military forces enjoyed incredible numerical superiority over NATO’s forces. Poland was one of the key players in Russian military planning.

Colonel Kuklinski, who served as a high‑level military strategist for the Polish Army, thus had access to thousands of documents concerning current Russian military strategy. When he understood what that strategy was and its implications for Poland, he was horrified enough to take action which endangered both his military career and his life.

This riveting film works partly because Jablonski structures it as a detective story. Understanding why Col. Kuklinski passed along over 40,000 Soviet military documents to the Americans requires understanding both the man and the military officer. This multi‑year and multinational process is made more difficult by the filmmaker’s having to penetrate a lot of institutional deceptions to talk to people who knew and worked with the Polish strategist. But the effort pays off with interviews with CIA handlers and former Polish army superior officers.

The other key to “War Games”’ effectiveness is that it’s also a fascinating tale of real‑life espionage. How did the CIA realize Col. Kuklinski was a credible information source? How did 1968’s Prague Spring influence Col. Kuklinski’s decision to pass along Russian military information? What part did a primitive Blackberry play in these spying efforts? These questions and others are answered in the course of the film. Some details, though, such as the exact use the Americans made of the Polish military strategist’s information are left deliberately vague.

Period footage and animated photographs effectively help center the film. But it is the recreation of a theoretical war game, rendered via a mix of actual combat footage and computer animation, which will haunt the viewer.

Jablonski’s film may not turn the viewer into a Daniel Pipes‑level Cold Warrior. But it’s hard to fault its conclusion that despite Col. Kuklinski’s losses, he made the right decision.

“A Perfect Soldier,” the title of John Severson’s short documentary, is a double entendre. The film’s opening minutes reveals it’s a Khmer Rouge commander’s compliment to the landmine. The other meaning concerns the film’s human subject, Aki Ra. He began two decades of military experience as a Khmer Rouge child soldier before eventually fighting against his former comrades. Now he spends his days removing landmines and unexploded ordinance from Cambodian soil. Astonishingly, tens of thousands of these unexploded weapons have been deactivated without injury by Ra, who uses just a stick and a penknife.

Severson does not depict Ra as having a subliminal death wish, even with the footage of Ra’s deactivating one anti‑tank mine with the edge of a hoe. It’s more likely Ra seeks atonement for taking part in the Khmer Rouge’s traumatic genocidal terror. Ra still has post traumatic nightmares related to his military service. Then again, with the film’s frequent shots of dull‑eyed and cautious Cambodians, Severson argues that Ra’s trauma is one shared with his nation.

The film shows Ra to be a very modest humanitarian doing his part to help rebuild his country. He rescues street orphans and helps them get educated so they can rebuild professions decimated by the Khmer Rouge. Some viewers may be disconcerted, though, by the idea that deactivating landmines can be an effective form of personal empowerment.

Special mention should be made of Ra’s wife Hout, whose supportive nature and own demining experience makes her a memorable character. But one must watch to the end to understand why Severson dedicates the film to Hout.

Another unforgettable heroine can be found in Mary Skinner’s documentary “Irena Sendler: In The Name Of Their Mothers.” This incredible but true World War II story concerns a Polish social worker who organized a secret network of women which managed to save the lives of over 2,500 Jewish children from death in Treblinka and other extermination camps.

As a Polish resistance member recounts, hiding Jews was the most dangerous resistance activity that could be undertaken against the German occupiers. It involved a willingness to hide a perfect stranger for an indefinite period of time and the knowledge that discovery by the Germans or their collaborators would result in the instant execution of the Jew(s), you, and your family. Not many people would be willing to accept such a risk. Sendler and her network deserve praise for their feverish efforts to save as many
Jewish children as possible.

To tell this story, one of Skinner’s primary sources turns out to be interviews with both the surviving members of Sendler’s network, several of the (now adult) Jewish children hidden by them, and a member or two of the Polish resistance. Through their stories, the viewer learns the emotional costs to both children and parents of trusting the children’s fate to Sendler’s people. One of the sadder anecdotes concerns a son who still could not bring himself to forgive his mother for sending him away to ensure his survival.

Sendler’s modest recounting of her “organizing efforts” turns out to be compelling. One wishes Skinner had explained why the Russian “liberators” later persecuted members of the Polish resistance. That cavil aside, this documentary is a necessary remembrance of some unjustly forgotten courageous women.