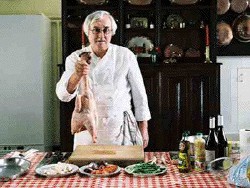 Peter Kerekes’ amazing documentary “Cooking History” brings half a dozen 20th century wars down from abstraction to human comprehension through an unusual lens. Cooking meals may seem trivial. Yet in hearing these men and women talk about preparing dishes for the German troops in World War II, the French troops fighting the Algerians, or even both sides in the Serbian/Croatian conflict, they reveal some human truths about war.

This effect should not be surprising. Taking a life may feel abstract to non-soldiers. Yet preparing and serving food is something concrete and universal. One of the more touching anecdotes concerns the meal of blini and vodka left out for Russian soldiers who fail to return from a mission.

Kerekes’ filmmaking brio effectively balances humor and seriousness. The cooks’ recollections touch on such wartime problems as theft of supplies, post-traumatic stress, the effects of wartime propaganda, and the quick shifting of political loyalties. The recipes for the various dishes seen in the film describe the massive amounts of food needed to literally feed an army. They show the vastness of undertaking war. Ending each recipe with a “pinch of salt” raises queries whether said pinch is the size of a small truck.

More sensitive viewers may be disturbed by the film’s unflinching scenes of animals being slain for their meat. But that footage metaphorically reminds the viewer that war at its core is about accomplishing objectives through “necessary violence.”

Complaining may be the basis of political activism. But is it also a disruptive social ill or a medium of social connection? Ada Bligaard-Soby’s delightful short documentary “Complaints Choir” considers that question. The titular choir is an international art project by artists Tellervo and Oliver Kalleinen. Everyday complaints such as phone mail hell get put to music, and the choir sings out these complaints in public. Bligaard-Soby follows the creation of complaints choirs in Chicago and Singapore, and the two very divergent results.

Though viewer sympathies wind up going towards realization of the choirs, the film takes time to consider efforts to end complaining and encourage action. Time is devoted to profiling the anti-complaint bracelet phenomenon. But as the Singapore experience shows, suppressing open complaining may promote a worse kind of oppression. Some viewers may emerge from this film wanting to form a complaints choir of their own. Certainly one could be devoted solely to Muni’s ridership problems.

One of the most unusual cities on Earth is not located on any continent. Marc Wolfensberger’s hypnotically fascinating “Oil Rocks: City above the Sea” portrays the world’s biggest offshore oil town. It was originally founded by Stalin in 1949 to provide oil to the Soviet Union. This Caspian Sea complex now contains 2,000 oil wells connected by over 300 kilometers of roadway. Wolfensberger’s cinematic tour of this 60-year-old facility introduces the viewer to such veteran workers and inhabitants as a Communist Party trainer who volunteered to live in the complex. Old Soviet newsreel clippings show the early days of Oil Rocks’ existence.

This oil city will remind viewers of those old science fiction stories of human colonies thriving in a hostile alien environment. It’s physically isolated from the nearest human city. Fierce storms have wrecked several of the connecting roadways. The workers’ rooms look highly compacted. Yet the Oil Rocks workers continue their jobs, even as Peak Oil’s spectre looms.

The film itself is remarkable especially given the near decade of bureaucratic obstacles Wolfensberger faced trying to physically visit Oil Rocks. It’s unclear what the facility’s future will be like. But for the present, the workers will continue to operate this former Soviet oil extraction enterprise.

Can repairing an ancient truck engine be key to healing a community? It can in Amit Rai’s moving “Road to Sangam.” Its heartfelt story concerns a simple car mechanic caught between personal obligation and the political pressures exerted by both his Indian and Muslim communities. Yet its resolution does not rely on proving one side right at the other’s expense. Mahatma Gandhi’s spirit seems to guide its ordinary hero to find and release the decency in him and his fellow community members. Cynics who see sociopaths everywhere will not be convinced otherwise by Rai’s film. But for those who want more from humanity, this film is a balm.

From its memorable opening shot to its touching finale, Bradley Rust Grey’s “The Exploding Girl” doesn’t commit a single misstep. Zoe Kazan plays Ivy, the titular character. She’s a college student who suffers from occasional epileptic fits. The film follows Ivy through a summer break in Brooklyn, where she’s caught midway between an increasingly distant relationship with the absent Greg and increasing feelings of tenderness towards unexpected roommate and longtime friend Al (Mark Rendall).

Grey’s film lives up to its title through understatement. Ivy’s epilepsy plays mostly a background role. Instead, the explosion comes from the unstated tension between her fears and her slowly developing confidence in expressing her suppressed emotions. One cannot blame Ivy for such suppression. In Kazan’s Ivy, one can easily imagine a young woman who had been humiliated in some manner by a public epileptic fit and became afraid of wanting or expecting much from life.

Rendall makes a good foil to Kazan. He plays the generous friend who’s afraid of growing closer to Ivy for fear of bringing further disappointment into her life. Yet the viewer believes in the potential chemistry between Ivy and Al because one sees the girl’s fears and hesitancy drop away when she’s with him.

Grey manages to tug the heartstrings without resorting to histrionics. The staging of Greg’s very important phone call achieves its impact by occurring on the street. But it is how the filmmaker chooses to resolve the burning question dominating the last minutes of the film that makes the answer particularly touching and the film an enjoyable experience.

(“The Exploding Girl” is slated for commercial release sometime in March.)