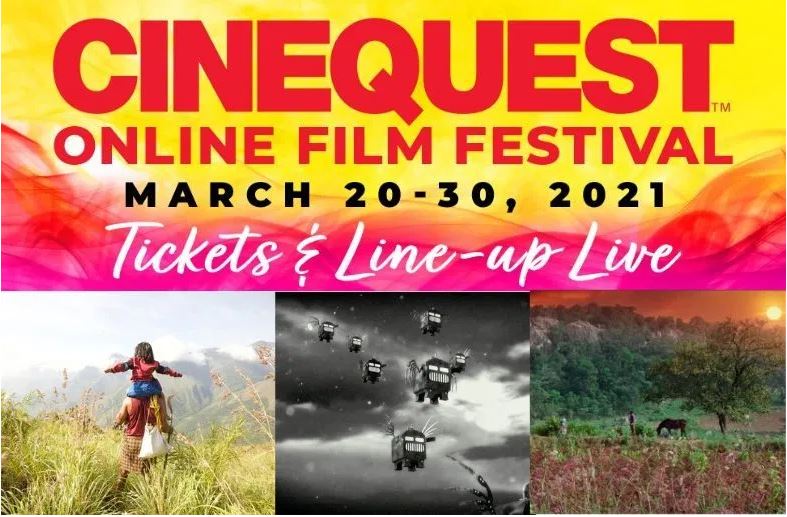 The 2020 edition of San Jose’s Cinequest was among the first Bay Area film festivals to be impacted by coronavirus shutdowns.  Halfway through the festival, further theatrical screenings were cancelled and Cinequest’s previously slated films were rescheduled to online screenings on the Creatics platform.

Now that March has rolled around, the Creatics platform will again host Cinejoy, the online version of Cinequest.  From March 20-30, 2021, interested viewers can see a mix of Bay Area-sourced features and shorts as well as films that have played the recent Sundance Film Festival or films that hail from such countries as Taiwan, Israel, India, and Brazil.  Thanks to the online format, ticket holders can watch the films any time they want.  Also, within certain limits, viewers anywhere in the world can catch a Cinejoy offering online.  However, if a viewer is interested in attending an online post-film party with other interested Cinejoy attendees, watching the film beforehand is definitely advised.

Here’s a sample of what viewers can expect at Cinejoy 2021:

This year’s festival kicks off with “Death Of A Ladies’ Man.”  Gabriel Byrne plays Samuel O’Shea, a man diagnosed with a brain tumor.  Surreal and wild hallucinations in the form of musical numbers inspired (as the film’s title hints) by the songs of Leonard Cohen soon bedevil O’Shea.  Will growing affections for Charlotte (Jessica Pare) ground O’Shea, or will he lose his sanity?

The semi-tragicomic “One Moment” takes viewers into the problems of members of the Sandwich Generation.  That’s the term for middle-aged children who have to balance their own lives and careers with caring for an aging parent.  Can the children of aging widower Joe Mc Guinness (Danny Aiello) give their father peace of mind in his final years…without losing their own minds?

“Alberto And The Concrete Jungle” might be what you get from mixing a city travelogue with a touch of Franz Kafka.  Photojournalist and digital nomad Alberto Buenaventura has made a life out of going to a place, meeting new people, having odd adventures, and then jetting off to the next place.  However, his trip to New York City has been complicated by a mysterious inability to leave the Big Apple.  Will he find a way out or find that it’s time to set down roots?

The action/thriller “American Thief” centers around a plot to steal the 2016 U.S. presidential election.  Caught up in the plot are a pair of hackers, a vlogger, and an artificial intelligence programmer.  Though scripted around real events, the line between actual events and fiction might not be as easy to discern as one may think.

Falling into the “true but definitely strange” category is the documentary “I’m An Electric Lampshade.”  Film subject Doug Mc Corkle worked for years as a buttoned-up and mild mannered corporate accountant.  Retired at age 60, he feels it’s now time to gamble his marriage and life savings on making it as a rock star.

“Drunk Bus” refers to a night-time shuttle which ferries drunk college students from parties with free-flowing alcohol back to their dorms.  Michael, who drives the shuttle, is more than physically stuck in a loop thanks to a breakup with his girlfriend.  But the challenge posed by a 300-pound tattooed punk rock Samoan security guard might just shake Michael out of his inertia.

“Beans” is the name of a 12-year-old girl being forced to grow up fast to become a tough Mohawk warrior.  That’s because the story’s set in the summer of 1990 during Canada’s Oka Crisis.  This indigenous uprising would tear Quebec apart from the rest of Canada for 78 tense days.

A different type of blast from the past can be found in a new adaptation of Charlotte Perkins Gilman’s gothic feminist horror tale “The Yellow Wallpaper.”  Writer and young mother Jane is taking a summer rest cure at an isolated country estate.  But the peculiar yellow wallpaper in her room becomes an object of obsession.  She starts secretly writing about a woman who’s trapped in the wallpaper, one that only Jane can free.

The documentary “Atomic Cover-Up” concerns the concealing of a real-life horror.  Shortly after the U.S. dropped atomic bombs on Hiroshima and Nagasaki, film crews risked their lives to record the resulting devastation on film.  However, the U.S. government seized the resulting footage and kept it top secret for decades.  The fear was that public release of the footage would become a disincentive to the continued stockpiling of nuclear weapons.  Now see some of the footage the U.S. government didn’t want the general public to see.

A more personal cover-up provides the starting point for San Francisco filmmaker Alex Liu’s documentary “A Sexplanation.”  In the 1990s, Liu received the type of school sex education that treated sex as something dirty and shameful.  Since Liu was also gay, those classes instilled a sense of shame in his desire to explore his sexuality.  But now that the filmmaker is out of the closet, he goes on a personal quest to learn all he can about shame-free sexual pleasure.

For those who want to play catch-up on some well-received films which have already screened elsewhere, Cinejoy has you covered.  “76 Days” offers an intimate look at life inside Wuhan, China during the 76 days the city was in coronavirus lockdown.  Previously screened S.F. IndieFest film “Summertime” follows more than two dozen Los Angeles residents over the course of one hot summer day as they recite poems about their lives and dreams.  Fresh from the Sundance Film Festival comes “Together Together,” the story of a gestational surrogate arrangement that turns into a way for two self-professed loners to develop a relationship based on platonic love.

The Belgian comedy “My Dad Is A Sausage” concerns a father who suddenly decides to become an actor.  Practically every other member of his family feels he’s going through a psychological burnout.  But only 12-year-old daughter Zoe believes her dad is a still unrecognized thespian.

The Turkish dystopian drama “in The Shadows” is set in an unnamed country whose citizens are under constant surveillance.  When one worker contracts a mysterious disease, his efforts to contact the Officials leads to his questioning the system he works in.  But such  questioning will show him just how ruthless the system can be.

In the animated documentary “In The Dark Of The Valley,” a mother initially blames bad luck for her four-year-old daughter’s developing a rare form of cancer.  But the real cause of the cancer might well be one of America’s worst nuclear meltdowns…and that her 4-year-old was just one of over 50 children who were poisoned by that event.

Death and murder becomes the stuff of dark comedy in the Korean tale “Go To Kill.”  A woman is stuck in the worst of all possible worlds.  Her husband has become a mental vegetable thanks to bankruptcy and being badly scammed.  Her mother-in-law is an ogre and her son is a fat good-for-nothing.  The only job she can find is cutting the heads off chickens.  Then one day she learns former classmate Mi-yun needs a hitman to bump off a rich chairwoman.  Mi-yun’s willing to pay forty million won to have the job done.  Can this unlucky woman pull off the killing and claim the fee?

What happens when you don’t get the magic wishes the village stories say you’re entitled to?  Poor but self-centered fisherman Babu faces this dilemma when he captures the titular water spirit “Taliya.”  His answer is to turn the water spirit into an exhibit to be gawked at by the masses.  But the village chief’s son and a white missionary priest want to shut down Babu’s act for different reasons.

The Canadian comedy “Events Transpiring Before, During, And After A High School Basketball Game” gets the unofficial prize of 2021 Cinejoy film with the longest title.  As the title indicates, the setting is a high school basketball game.  However, the low stakes attached to the game makes whatever its final score might be irrelevant.  What really matters are the personal dramas surrounding the game.

These films are just a sampling of what will be screened online at this year’s Cinejoy.  Let your curiosity lead you to what may be your next favorite film.

(For information about ordering tickets for the films being offered at this year’s Cinejoy, go here.  All Cinejoy offerings are available for online screening anywhere in the United States.  However, for interested viewers in the rest of the world, a small number of films will not be available to screen in their country.  Otherwise, global viewers will have complete access to the Cinejoy program as well.)