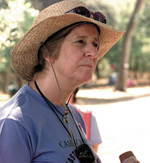 Cindy Sheehan has had it. Not just with war politics in America, but also with the peace movement that she became a spokesperson for.

In her Memorial Day resignation as the “face” of the American anti-war movement, Sheehan, the mother of Casey, who was killed in Iraq, gave two major reasons for calling it quits: She has been demonized by leftists for daring to criticize the Democratic Party for its failure to end the war. And she finally found the answer she sought about her son’s death.

Sheehan attained international fame when she set up “Camp Casey” in Crawford, Texas just outside of George Bush’s ranch. Her point: To get Bush to explain the “noble cause” for which her son died. Sheehan sacrificed her own personal savings and much of the money she made from her writings and speeches to fund her efforts against the war. She left behind her husband of 29 years as well as her other children to dedicate every waking hour to holding George Bush accountable for the illegal and immoral war he started.

“I am deemed a radical, because I believe that partisan politics should be left to the wayside when hundreds of thousands of people are dying for a war based on lies that is supported by Democrats and Republicans alike,” Sheehan said. “It amazes me that people who are sharp on the issues and can zero in like a laser beam on lies, misrepresentations, and political expediency when it comes to one party refuse to recognize it in their own party.”

Sheehan isn’t giving up the fight for peace, just the spotlight: “This is not my “Checkers” moment, because I will never give up trying to help people in the world who are harmed by the empire of the good old US of A, but I am finished working in, or outside of this system.”

Sheehan is right: The Democrats need to be held as accountable for the war as the Republicans. Most of the Democrats in Congress voted to give Bush the power to wage war. Most of them approved every military funding bill since 9/11. Most of them failed to speak out against the ridiculous reason for war: Those mythical weapons of mass destruction. Even now, as it becomes more and more painfully obvious that impeachment may be the only way to reign in an out-of-control president who won’t follow laws passed by Congress, Democratic House Speaker Nancy Pelosi insists that it’s “not on the table.”

The more painful realization that Sheehan says she made is that her son’s death means nothing. “Casey died for a country which cares more about who will be the next American Idol than how many people will be killed in the next few months while Democrats and Republicans play politics with human lives.”

Sheehan is wrong on that one. Casey Sheehan died for something: American oil interests, plain and simple. He died so that Americans could drive their cars, take airplanes across the country, and operate all of the modern-day gadgets that they are addicted to.

Casey died for the energy-hogging lifestyles Americans refuse to give up.