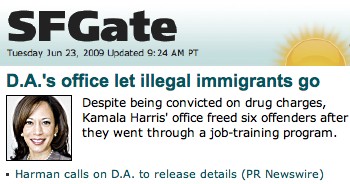 The San Francisco Chronicle was not content criticizing San Francisco District Attorney and Attorney General candidate Kamala Harris for operating a jobs program for undocumented immigrants who had committed crimes; the paper’s website linked the article to a press release by right-wing Republican Senator Tom Harman, who is running against Harris for Attorney General. Why would the Chronicle link its lead story to a press release from anyone? How could Chronicle editors not have noted that this particular press release was issued as part of a political campaign? I described on June 9 how the Chronicle’s leadership appears to have “given up.” This description now seems to apply to its editing.

When the Los Angeles Times broke the story about Kamala Harris’ allowing a half dozen first-time drug offenders to avoid deportation and instead clear their records by going through a job-training program, it again beat the San Francisco Chronicle on the latter’s home turf. On March 11, the Times ran a front-page expose of Bayview-Hunters Point community leader James Bryant, in a story that was expanded upon in Beyond Chron on March 19, but yet still has not appeared in the Chronicle.

Chronicle anger over another Times scoop of a San Francisco story may have had nothing to do with the paper’s decision to link its own story to a press release from right wing State Senator Tom Harman. But someone at 5th & Mission made this bizarre decision, which sought to stoke the fires of immigrant bashing that previously ensnared San Francisco Mayor Gavin Newsom’s own attempts to deal humanely with immigrants.

The Chronicle should disclose who made the decision to link Harman’s self-promoting political press release on to SfGate.com’s lead story. Whoever gave the former law partner of George Deukmeijan his biggest Bay Area audience ever should take public responsibility, for this act otherwise represents a major but unreported campaign contribution to Harman’s campaign.

Randy Shaw is the Editor of Beyond Chron. He shows in The Activist’s Handbook that “mistakes” like the above happen for a reason.