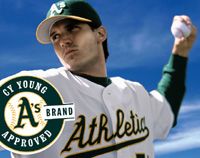 Both the headline in Sunday’s Sporting Green (“Easy as 3-2-1, A’s dismantle rotation”) and Ray Ratto’s column comparing the current A’s ownership to Connie Mack and Charlie Finley missed the obvious point. For all of the praise for the A’s “Big Three,” none could win the big game and the team never won a playoff series during their tenure. The Big Three was a marketing concept, not a route to the World Series. ##M;[more]##

During the past five years the A’s best chance to make the World Series was in 2002, the year they faced the Twins in the first round rather than the Yankees. Tim Hudson, who was traded last Thursday, started the opening and fourth games. He failed to pitch well in either, and the A’s lost both of his starts and the series to the underdog from Minnesota.

This was the year that the Angels beat the Yankees and went on to defeat the Giants in the World Series. The A’s matched up well with the Angels and with home field advantage could well have prevailed. But Hudson failed twice to get the job done.

As much as we recall the bad luck/bad plays that kept the A’s from winning a playoff series—the failure of Jeremy Giambi to slide against the Yanks and Miquel Tejada’s bizarre rundown against the Red Sox-the bottom line was that none of the Big Three stepped up to carry the A’s to victory.

Compare any of the three to Josh Beckett, whose outstanding performances carried the Florida Marlins to victory over the Cubs and then to an upset defeat of the favored Yanks in 2003. Beckett accomplished what Zito, Mulder and Hudson never were able to do.

I have always liked Tim Hudson, but he won only 12 games last year. He also has injury problems. While the Chronicle bemoaned his trade to the Braves, ESPN’s Peter Gammons thought the talent the A’s received made the trade an even deal.

Mark Mulder finished the 2003 season on the injury list and collapsed entirely in the last six weeks of the 2004 season. Mulder’s last victory was on August 24, and had a 7.27 era in his last seven starts.

People explain Mulder’s September failures on the grounds he was tired. But if the goal is to go deep into the playoffs, a pitcher who cannot be at his best in October is not the answer.

Barry Zito, the last remaining member of the Big Three, won a total of 11 games last year. Zito pitched so poorly that many wondered if his career had peaked. I hope Zito rebounds this year, but for all of his surfer image, he does not appear to still be an elite pitcher.

Ratto compares current A’s owner Steve Schott to former owners Mack and Finley, both of whom sold star players and broke up great teams. But both of the former owners sold players after they had led their teams to World Series victories. Hudson and Mulder failed to lead their team to a single playoff series victory.

The A’s missed the playoffs last year and with the Angels stacked, they were not going to do better in 2005 by keeping their 2004 team intact. A’s management seemed unable to fathom Mulder’s decline, and allowed him to start-and get shelled– in the division deciding game last year.

Cardinal fans beware—Mulder lost the deciding game to the Yankees in his best season in 2001 and also failed to defeat the Twins in game five in 2002. Mulder is not the guy you want on the mound in a decisive playoff game next year.

The A’s problem has been a lack of hitting throughout the lineup and the absence of clutch pitching. The team improved on the former last year, and their new pitchers might finally win the big games that the Big Three could not.