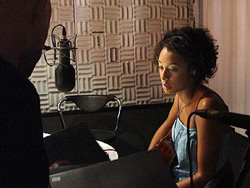 But from the San Francisco Chronicle’s perspective, if the female interviewee is not an employee, male reporters are free to say whatever they want and then publish their sexually harassing remarks.

Vaziri: What kind of stuff do you read?

Rae: I read a lot of women authors

Vaziri: So do I—most of them write for Penthouse Forum

Rae ignored Vaziri’s comment, and went on to note that she is reading a book about the Cultural Revolution in China in the 1960’s.

Vaziri’s music interviews typically comprise his stupid comments and inane questions, and further explain why the Chronicle’s music coverage is so poor and its Sunday circulation so low. But allowing Vaziri to inject and then publish sexist innuendo crosses a line, and might finally give the Datebook editors the excuse they need to finally can the no-talent bum.