Chronicle in Denial Over SF’s Gains from Twitter Deal 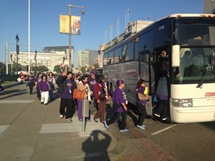 The San Francisco Chronicle continues to cover the financial impact of the Mid-Market/Tenderloin payroll tax deal like the Republican Party approaches climate change: facts and studies are ignored, and the truth is a matter of opinion.

In 2011, the San Francisco Controller’s Office found that over a 20-year period, the Central Market/Tenderloin Payroll Expense Tax Exclusion would result in a net $54 million dollars in additional payroll revenue for the City. Since the exclusion was passed, an area in decline for over forty years has seen the arrival of 18 tech companies bringing 13,000 jobs and taking up roughly 2 million square feet of office space. An area that saw little housing built during the dot-com boom or housing bubble now has over 5000 housing units have approved or under construction, and 17 small businesses have opened.

But according to reporter John Cote of the San Francisco Chronicle in his April 16 story “S.F. tax-day protest marches on Twitter,” the answer to the question whether the tax exemption was worth it “is mired in politics and obscured by an incomplete picture of how much money the city left on the table—and whether it was recouped elsewhere.”

Mired in politics? Even critics like SEIU 1021 agree that the tax exemption caused an economic boom; their argument is that their workers deserve a fair share of the spoils. The only “politics” involved here has nothing to do with the economic facts, but rather with certain newspapers refusal to acknowledge that Mayor Lee and other tax exemption backers have been proven right.

Money left on the table? I have no idea what Cote is talking about. But we do know that the cost of the exemption was indisputably “recouped elsewhere,” to the tune of $54 million in additional payroll revenue and the millions of dollars more in Mid-Market investment sparked by the tax deal.

The problem here is that Cote does not mention the 2011 Controllers Report in his article until the next to last paragraph, after his central arguments have been made. It’s as if his editor read the story, realized that the report undermined Cote’s central premise that the tax exemption’s value was unclear, and then threw in the study’s conclusion—which Ted Egan of the Controller’s Office still stands by—after most readers had already turned the page.

Egan’s report should have been among the top paragraphs on a story about the financial impacts of the tax break. But if you want readers to believe that the financial case remains shrouded in mystery, you put Egan’s “case closed” analysis at the end.

As for Cote’s fallback claim that, “the answer also hinges on the disputed point of whether Twitter would have left San Francisco without the tax incentive,” it’s not clear who other than the Chronicle is doing this “disputing.” There is no way Twitter moves to Mid-Market without the tax deal, and Cote’s argument can be similarly used to question the benefits of any government tax break or subsidy.

Facts matter. And considering that the main issue in San Francisco since the Twitter tax break has been the city’s economic boom, the SF Chronicle looks silly in still questioning the policy’s fiscal impact.

Yet as I wrote last October, “SF Chronicle Misrepresents, Confuses Twitter Tax-Break Costs,” the paper also continues to wrongfully connect the geographically targeted net new hire tax break to revitalize Mid-Market/ Tenderloin with the citywide stock option exemption. The latter affected companies citywide and was supported by SEIU 1021 and then Supervisor Ross Mirkarimi, both of whom opposed the Mid-Market-Tenderloin exemption.

You wouldn’t know from Cote’s April 16 article that SEIU supported this far more lucrative exemption; that would have caused readers to wonder why the reporter did not ask protesters if it was fair to blame Mayor Lee for a policy their union also supported.

Instead, Cote goes out of its way to further confuse readers about two entirely separate pieces of legislation by citing an accounting firm’s valuation of the Twitter’s stock option tax break that was specifically requested by the Chronicle; is the Chronicle unaware that had Twitter not gotten a geographically limited tax break and still moved to Mid-Market as Cote suggests was possible, that it would then have still gotten the much larger stock option tax break?

If these Chronicle stories have you down about the state of journalism, check out Kim-Mai Cutler’s brilliant and remarkably comprehensive April 15 story on tech and SF’s housing crisis on Tech Crunch. Cleverly titled, “How Burrowing Owls Lead To Vomiting Anarchists (Or SF’s Housing Crisis Explained),” it’s incredibly long but worth the effort. You don’t have to agree with her on every point to appreciate a reporter trying her best to get a major story right.

Cutler’s story includes a lot of facts, so those more comfortable with Cote’s reporting style are forewarned.