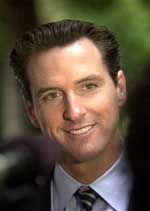 When the July 22 edition of the San Francisco Chronicle headlined, “Is Newsom Stretching the Facts?” some may have been surprised. After all, the Chronicle has promoted Gavin Newsom’s career since he entered politics; and while it has criticized him more in recent years, a major story implying that “the campaigning mayor touts major San Francisco successes as his own” appears to be a sharp critique of Newsom’s gubernatorial campaign. But the Chronicle is following the same script it used when it ran a lengthy feature early in 2003 about how the Getty family subsidized mayoral candidate Newsom’s business career; the piece insulated Newsom from the story breaking during the heat of the campaign, and forestalled future coverage by making the Getty connection “old news.” The Chronicle did the same with Newsom’s owner move-in eviction of a long-term tenant; Matier & Ross allowed Newsom to spin the issue during the primary race, and the Chronicle then ignored the story during his runoff against Matt Gonzalez. In this case, the Chronicle has identified trivial overstatements by the Mayor few voters will care about; meanwhile, the bigger gaps between Newsom’s rhetoric and the San Francisco reality are ignored.

On February 23, 2003, nearly nine months before the mayoral primary election, the San Francisco Chronicle ran a mammoth story on how mayoral hopeful Gavin Newsom “has parlayed Getty money, family ties and political connections into local prominence.” Although the story challenged Newsom’s depiction of himself as a self-made entrepreneur, it insulated him from having to address this issue when voters were actually paying attention to the race.

On October 29, 2003, the Chronicle’s Matier & Ross did damage control for Newsom by addressing a mailer sent by candidate Angela Alioto that exposed Newsom’s owner move-in eviction of 65-year old long-term tenant. The duo quoted Newsom saying the issue was “old news,” and the paper made sure it was kept under wraps during the December runoff campaign against Matt Gonzalez.

Now the Chronicle has assigned three reporters to assess whether Gavin Newsom’s campaign speeches overstate his role in the City’s successes, and they produced a story that must have left the Newsom camp giddy with joy. After all, the story not only fails to prove its point, but now the Newsom camp can claim that the issue of Newsom rhetoric vs. reality has been covered, and, like the Getty loans and owner move-in eviction, is “old news.”

The Chronicle addresses Newsom claims in four areas: health care, education, Green Initiatives, and Jobs/Budget. Few if any voters will fault the Mayor for overstating his success in any of these areas.

Health care: Tom Ammiano unquestionably was the driving force behind its passage. But Newsom ultimately took on his business allies to pass the measure, and you are not going to find voters in Los Angeles or San Diego objecting to Newsom’s crediting his own role.

Education: Newsom has been extremely involved in San Francisco’s schools — some believe too involved — and has worked hard to increase school funding. Few if any voters will find fault with Newsom’s claims.

Green Initiatives: The Chronicle’s desire to protect rather than criticize Newsom becomes transparent here. Newsom is obsessed with greening, and voters primarily concerned with the issue will not care that his claims of rolling back emission standards cannot be verified.

Jobs, Budget: San Francisco has come out of California’s budget mess better than virtually any other city in the state. Mayors always claim credit for projects and jobs that would have occurred under anyone’s watch, and voters are not going to accuse Newsom of overstatements on this point.

Bottom Line: Most readers will conclude that if this exhaustive Chronicle investigation only produced such trivial “rhetoric v. reality” gaps, Gavin Newsom is far more honest than most politicians.

What the Chronicle Omitted

If the Chronicle had wanted to really challenge Newsom’s claims about his record in San Francisco, this is what it would have discussed:

Inability to Work With Legislators:

Consider: Newsom vigorously opposed attending a Board meeting once a month (“Question Time”) even after voters approved the measure as a policy initiative; he unleashed unprovoked attacks on then-Board President Peskin following the November 2007 election, even accusing Peskin of criminal wrongdoing; he then repeatedly canceled meetings with Peskin’s successor, David Chiu, despite pressing budget issues; and he has attacked the Board of Supervisors throughout his mayoralty, even refusing to spend funds allocated by the Board.

Examples of Newsom’s unwillingness to “work together” with Supervisors are so widespread that the Chronicle’s omission could not have been an accident.

The Chronicle’s questioning Newsom’s working relationships with fellow politicians could have led voters to fear that Gavin Newsom would be another Gray Davis — whose inability to work with Democratic Legislators ultimately brought his recall. But the Chronicle ignored this fundamental “rhetoric v. reality” discrepancy, despite it being one of the most talked about issues among City Hall insiders.

What about Newsom’s claim that as Mayor he had made “the tough choices that Sacramento politicians have been hesitant to make”?

I can’t think of a single decision Newsom has made as Mayor that went against a major campaign contributor, or an industry that financially backs him, or that actually went against what a majority of voters desired. The employer health care mandate is the most commonly cited example of a Newsom “touch choice,” but he is using his support for universal health care as a centerpiece of his campaign, so it’s hard to see what was “tough” about the decision to back the mandate.

Newsom often touts Care not Cash as part of his willingness to make a “tough choice,” but his entire constituency backed the plan and those most opposed were never Newsom supporters. Similarly, while Newsom’s implementation of gay marriages was an act whose great historic significance is undisputed, it’s not clear what was so “tough” about a decision that broadened his political base without sacrificing his business or donor support.

What would be a “tough” choice?

How about signing — rather than vetoing — legislation to help San Francisco tenants during these tough economic times? This would anger the real estate interests that have long funded the Mayor, but if we are talking about the next Governor addressing “tough” issues like the revision of Prop 13, isn’t a demonstrated willingness to challenge Big Real Estate a job criteria?

Or what about trying to get Downtown to pay its fair share for MUNI? The Mayor has appointed an MTA Board that has never even put a revenue generating measure on the ballot. The next Governor will have to eliminate corporate loopholes and make Corporate California pay its fair share: if someone has not been willing to do this locally, why would we expect they could do so as Governor?

Gavin Newsom is a great campaigner who leaves audiences excited about his energy and the breadth of his ideas. But the Chronicle has spent over a decade giving Newsom a pass on his implementation record — remember his the anti-litter campaign that involved deputizing city workers? — and is now trying to insulate him from criticism on this point by focusing on the trivial by ignoring the substantive.