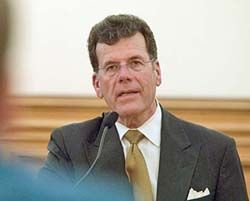 In recent weeks the San Francisco Chronicle has charged Treasure Island Development head Tony Hall with engaging in “questionable” financial dealings by setting up “separate bank accounts” outside the city treasury. Hall was cleared of any wrongdoing at a Supervisor’s hearing this week, but the resulting Chronicle story ignored his exoneration and repeated the false charge. Meanwhile, the Chronicle has refused to cover an undisputed violation of campaign laws by Assessor Phil Ting, as well as District Attorney Kamala Harris’ role in the illegality. It looks like the Chronicle is up to its old tricks again, writing falsehoods about its political opponents while covering up wrongs by its political allies.

From September 15-17, the San Francisco Chronicle wrote three stories claiming that Treasure Island Development Chief Tony Hall was “under fire,” had taken action that “raised concerns about financial and accounting practices,” and was involved with “financial irregularities.” A Supervisors Committee hearing on Monday revealed all of these allegations to be false, with Board President Aaron Peskin holding up a letter confirming that a high official in the Treasurer’s office had control of the funds that Hall was charged with misusing.

But after publishing multiple stories linking Hall to financial improprieties, the Chronicle refused to stop their attacks. The paper’s September 27 story on the hearing (“Treasure Island chief decries development delay”) omitted any mention of the Treasurer’s letter, and instead repeated its now discredited claims that the controller and city attorney’s office had “questions” about Hall’s use of the funds.

Significantly, the Chronicle waited until the above article’s 21st paragraph (in a 24 graph story) to disclose what was really behind the Chronicle/Mayor’s Office attacks on Hall: the Treasure Island chief’s claim that the city was giving a “sweetheart deal” to the Island’s developers.

It’s a plot right out of a movie.

As Tony Hall tried to alert taxpayers about insider political deal making at Treasure Island, he suddenly came under attack for engaging in financial wrongdoing. Mayor Newsom did not want his or his staff’s hands on the assault, so they fed the “story” to Chronicle editors. The Chronicle then joined unsupported allegations and incendiary language with letters from the Controller and City Attorney to produce stories claiming that the only public critic of the development deal was involved with “irregularities” and was “under fire.”

What the Mayor’s office did not count on was Supervisor Chris Daly deciding to hold a public hearing on the issue. This gave Hall a chance to set the record straight, to show the support he has on the Island, and to make the connection between the timing of the attacks upon him and his refusal to remain silent about a sweetheart deal.
The hearing also made clear another key fact that the Chronicle continues to ignore: all of the problems with lines of authority at Treasure Island should be laid before Mayor Newsom, not his appointee, Tony Hall. But don’t hold your breadth waiting for a Chronicle editorial blaming confusion at the Island on the Mayor who gave mixed messages to Hall about his job duties and authority.

The bottom line: members of the public who rely on the Chronicle as a news source still erroneously believe that Hall has been involved in financial shenanigans at Treasure Island. Only Beyond Chron readers or who watched the Supervisors hearing would know that Hall was not only cleared, but that his allegation of a “sweetheart deal” was at the heart of the hearing.

One could not dream from the Chronicle’s coverage that the the separate bank account “scandal” was invented by mayoral staffers in an effort to create public pressure for Hall’s removal.

While the Chronicle created a non-existent illegality to attack the independent Hall, it has prevented its readers from learning about Assessor Phil Ting’s illegal fundraising mailer.

When Beyond Chron first reported the Ting campaign’s illegal use of envelopes saying “Paid for by Kamala Harris for District Attorney,” we omitted certain facts so that the Chronicle could have its own “angle” on the issue. But although Chronicle editors and reporters know about the issue, the campaign violations by the Assessor and potentially the District Attorney have been kept out of the paper.

Media often ignores a story broken by a competitor, which is why the Washington Post had the Watergate scandal all to itself for months. But the allegations against Hall, Harris and Ting occurred around the same time, and all involve San Francisco government officials—with the Assessor and District Attorney holding much more prominent positions than that of Treasure Island Director.

Since the District Attorney is San Francisco’s chief prosecutor of legal violations, one would assume that the undisputed fact that Kamala Harris was involved in an illegal campaign mailer would be newsworthy. The Chronicle ran ongoing front-page stories critical of Terrence Hallinan when he was in Harris’ job, so its not as if the office’s affairs have traditionally gone unreported.

Similarly, the Chronicle ran constant stories raising questions about the campaign ethics of prior Assessor’s Doris Ward and Mabel Teng. Yet current Assessor Phil Ting’s undisputed violation of campaign laws has not even been reported in the Chronicle.

Some would argue that the Chronicle has been too busy providing breaking news on the Fillmore Street ski jump to also cover wrongdoing by San Francisco officials. But the Fillmore Street story has run in the center of the front page, leaving space in the Bay Area section for reporting on the Harris-Ting scandal.

And the paper wonders why it keeps losing subscribers. Stay tuned Monday for an expose of Chronicle coverage that will really get them shaking in the editorial offices.