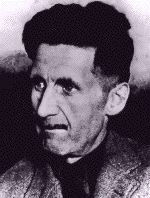 On February 15, the Chronicle ran a story charging the state’s media with “playing footsie” with Governor Schwarzenegger, and of reporting in a “marshmallow mode” rather than “turning up the heat.” The article ignored one critical point: the Chronicle routinely slants its news coverage to help the governor. The most recent evidence came a week after the Chronicle’s aforementioned “media is starstruck” story, when its framing of the results of a new Field Poll differed dramatically from the coverage of the Sacramento Bee, San Jose Mercury News, and other media.

George Orwell, best known as the author of “1984,” warned over fifty years ago about the danger of the media using intentionally misleading words. Orwell was primarily focused on the type of “War is Peace, Bad is Good” rhetoric known today as Bushspeak, but he was also concerned about deliberate misrepresentations by the media.

Schwarzenegger’s current California media tour to promote his plans For reforming state government looks like a resounding success—if only because the California media, rather than turning up the heat, often ends up in marshmallow mode with the state’s famous governor.

Well put. But if the purpose of Marinucci’s piece was to show that the Chronicle was not part of this media boot licking, and could be trusted to subject Schwarzenegger to the same scrutiny it gave former Governor Gray Davis, than the paper has truly entered an Orwellian world.

Consider how the Chronicle’s February 24 coverage of an important new Field Poll differed from its media competitors.

The Chronicle’s headline read, ” Field Poll: Voter’s back governor’s plans to overhaul state government. But survey finds no enthusiasm for special election.” The first paragraph confirmed the popularity of Schwarzenegger’s plans as follows:

As Democratic lawmakers dismissed on Wednesday Gov. Arnold
Schwarzenegger’s proposal to base teachers’ pay on merit rather than
tenure, a new Field Poll found that voters support that idea along with
other government shake-up plans he’s pushing


Both the headline and the key first paragraph fit the frame that the Governor wants and that the media, particularly the Chronicle, regularly provides: Democratic legislators are out of touch with the state’s electorate and Schwarzenegger has no choice but to “go over their heads” and appeal directly to “the people.”

If the Chronicle’s rosy scenario for the Governor’s plans had been confirmed by the actual Field Poll results, than the paper could hardly be faulted. But anyone familiar with ballot initiatives could immediately see that the results were not as the Chronicle described.

Winning ballot measures typically start with a support base of at least 60%. This support then declines as voters are exposed to opposition advertising, and learn “facts” about the initiative not revealed to them in the telephone poll.

I am unable to recall a statewide initiative in California that won at the polls after early polling showed support levels as slim as that found for three of the governor’s proposals. The staggering sums Schwarzenegger is out raising could change this equation, but based on current polling all three measures face a very uphill battle.

In addition, the Field Poll found that 67% of voters who were told of the projected $50-70 million cost said they disapproved a special election this November for any reason. This makes the battle for the Governor’s proposals even tougher.

According to my analysis of the Field Poll, the Chronicle headline and framing was almost entirely wrong. And both the Sacramento Bee and San Jose Mercury News agreed with me.

The Bee headlined its story, “Field Poll: Most initiatives urged by governor have slim leads.” Unlike the Chronicle’s first paragraph, which emphasized voters support for the governor’s plans, here is the Bee’s opening paragraph:

A slim majority of registered voters supports most of Gov. Arnold
Schwarzenegger’s ‘reform’ proposals, according to a poll released
Wednesday, but two-thirds oppose spending millions of dollars for a
special election.

The Bee then notes that Field pollster Mark DiCamillo described the support for the Governor’s proposals other than the merit pay for teachers (which had 60% support) as “lukewarm.” DiCamillo went on to state, “with initiatives, the ‘yes’ side is usually hoping for higher numbers early on.”

It certainly makes one wonder why this quote from the pollster did not appear in the Chronicle. It sure would have forced a change in the headline and framing of the paper’s story.

The Bee also quotes DiCamillo calling the Governor’s initiatives “vulnerable,” though he notes that Schwarzenegger has surprised pollsters before. DiCamillo’s analysis, which mirrored my own and likely anyone familiar with polling on initiatives, was entirely absent from the Chronicle.

Newspaper readers in the Sacramento area were not the only ones to get the real story about the Field Poll results. The San Jose Mercury News used an even more discouraging headline, “Voters tepid on governor’s overhaul: Most like teacher merit pay, but pension, remap proposals have narrow support, poll says.”

After a first paragraph noting that the governor’s “contentious package” has only “narrow support,” the Mercury News quotes pollster DiCamillo’s assertion that “usually you like to start out with bigger leads than this, but certainly he has some advantage. It’s going to take everything Schwarzenegger has to defend these.”

The message of the Mercury News and Bee stories is that the Governor faces an uphill battle. By omitting DiCamillo’s quotes about “lukewarm” support and the need to start with “big leads, ” the Chronicle’s story touting “voter support” for a “government shake-up” was almost entirely wrong.

This is the type of misrepresentation of facts that George Orwell so feared.

It’s not the voters who are eager to pass Schwarzenegger’s plans; it’s the multi-million dollar Hearst Corporation, owners of the Chronicle.