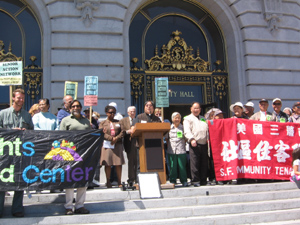 The San Francisco Chronicle has already opened its campaign against an affordable housing charter amendment slated to appear on the November 2008 ballot. In his December 12 column, C.W. Nevius misrepresented both the measure and those responsible for its passage. He also made it clear that the paper wants the initiative to be a referendum on Chris Daly, not on San Francisco’s affordable housing needs. Relishing his role as the Chronicle’s latest “Minister of Disinformation,” Nevius created the false premise that Daly was claiming primary credit for the housing measure, and then sought to turn activists against Daly by charging that the Supervisor was denying activists their due. But Daly has used recent hearings to emphasize that grassroots activists drove the housing measure, and a number of Supervisors have denounced efforts to identify the campaign with Daly. But as became clear with Nevius’ coverage of homelessness, he is not a man who lets facts get in the way of his arguments.

Since criticizing Newsom at the November 15 Rules Committee hearing on the charter amendment, Daly has gone out of his way to ensure that the charter amendment was not part of a Daly v. Newsom fight. Supervisor Ammiano and others have publicly challenged those seeking to frame the housing issue in such terms, but this has not stopped the Chronicle from consistently identifying the housing measure with Daly.

Nevius’ December 12 column cleverly pursued this framing while superficially seeming to be praising Daly. But the goal was obvious: get voters to identify the affordable housing measure with Daly and his political ambitions, rather than with the tens of thousands of San Francisco suffering from the city’s affordable housing crisis.

In the two public hearings after November 15, Daly took pains to credit community groups and activists with driving the housing measure. Supervisor Maxwell and others also emphasized the public outpouring in favor of increasing spending for affordable housing.

Yet according to Nevius, the Housing Justice Coalition is “rankled to hear that Daly was going to get credit” for the measure’s passage. But it was not Daly who was claiming chief credit—the Chronicle assigned it to him. And after falsely assigning him major credit, the paper then tries to use this misrepresentation to divide Daly from his base.

In addition to falsely identifying the measure with Daly, the Chronicle is seeking to score political points by vastly overstating the funds allocated by the measure.

The paper is routinely claiming a cost of $2.7 billion over 15 years. But it does not tell readers that the set-aside only involves an estimated annual $33 million in new money; over $2 billion would be allocated for housing without the set-aside.

But whereas $33 million is not likely to strike fear in the minds of voters—who just approved a $28 million set-aside for MUNI—$2.7 billion in new money might. So expect the paper to continue misrepresenting the price tag of the charter amendment regardless of the facts.

Nevius also cites Supervisor Michela Alioto-Pier’s claim that “This is not something that is going to help our middle class. Where’s the help for our policemen, firemen and teachers?” What Nevius does not tell readers is that on October 19 Mayor Newsom announced a housing subsidy plan for teachers and police, using $1.7 million allocated by the Board of Supervisors.

Nobody has claimed that the housing set-aside, or any other single measure, will solve all of the city’s housing problems. And there is likely to be a measure on the June ballot that addresses the need to increase homeownership opportunities for working and middle-class families.

The Chronicle has virtually never supported any legislation or ballot initiative that tries to keep low-income and working-class people in San Francisco. The contempt for these populations came clear in Nevius’ piece when he stated, “Daly can tell his loyal constituents (some of whom always seem to show up at public meetings to burst into spontaneous applause) that he’s fighting hard for them against the evil power of the big political machine.”

In other words, Nevius believes Daly skillfully manipulates his predominately low-income backers, winning what the reporter sees as orchestrated applause. In Nevius’ world, those with lower incomes are not capable of making rational political judgments, even though such residents are much more in tune with the voting preferences of San Franciscans than the Chronicle editorial board.

Expect the Chronicle’s false reporting on the housing set-aside to continue as the November 2008 election approaches.