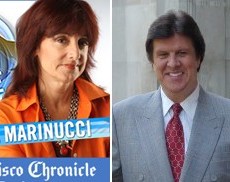 Less than 48 hours after “King of Mean” Garry South was left calling the shots in the Gavin Newsom campaign for Governor, the SF Chronicle had a front-page piece attacking Jerry Brown. Apparently, Brown fundraising for his favorite charities carries all sorts of “conflict-of-interest” allegations that voters should be mindful about in next year’s election. But this wasn’t the first time reporter Carla Marinucci went on the attack to help Garry South’s clients. In the last gubernatorial race, Marinucci used her perch at the Chronicle to repeatedly go after Phil Angelides – who was locked in a nasty primary fight against South client Steve Westly. On March 16, 2006, Marinucci wrote a story on Angelides that strangely resembled yesterday’s piece on Brown – attacking the state Treasurer for raising corporate donations to a non-profit. South burned bridges in that race with his scorched-earth campaign against Angelides (and bad-mouthing the nominee after the primary was over), and it seems like he’s back to his old tricks. And feeding stories to the Chronicle sounds like part of his plan.

The 2006 Democratic primary fight between Steve Westly and Phil Angelides can best be described as a “murder-suicide pact” that accomplished nothing except re-elect Arnold Schwarzenegger. But while Angelides spent his time criticizing Westly’s positions (he attacked him for being “too close” to the Governor), Westly ran a smear campaign on Angelides that involved his connection with developers, a Lake Tahoe dredging project and a history of corporate fundraising. It was classic Garry South tactics: throw a ton of money behind attack ads that tear down your rival, leaving everyone bloodied in the end.

And right there to rev up the engines under the guise of media “objectivity” was Carla Marinucci. Her front-page Chronicle story on May 31, 2006 – one week before the election – focused on Angelides’ ties with real estate developer Angelo Tsakopoulos, repeating the Westly campaign’s discredited charge about connections with illegal dumping in Lake Tahoe. Marinucci wrote numerous op-eds masquerading as “news analysis” during the race that made Angelides look bad, such as her May 1st piece that said he faced an “uphill climb” at winning the nomination – right after he got the Democratic Party’s endorsement.

Garry South didn’t stop his attacks on Angelides after his candidate lost the primary, and neither did the Chronicle’s Marinucci. Barely two days after the nomination fight was over, she had another front-page “news analysis” that said Angelides would have to sell his platform to a “reluctant electorate.” It was in that article where she quoted South as saying: “it would be hard to single out [Angelides’] biggest liability because he’s a walking Achilles heel … Arnold and his Karl Rove-trained wrecking crew will tear the guy apart, atom by atom.” That piece set the tone for the rest of the campaign season, and Angelides went on to lose badly to Arnold Schwarzenegger.

Yesterday’s attack on Jerry Brown was odd, because it’s not unusual for high-profile career politicians like Brown to fundraise for various charities – with donations coming from corporations. Gavin Newsom does the same – such as the party he threw in Denver at the Democratic National Convention, which was sponsored by AT&T and PG&E. But the implication of Marinucci’s article was clear – corporations will influence Jerry Brown by giving money to his favorite charities (where there are no donation limits), rather than contributing directly to his campaign.

But what makes this interesting is that Marinucci made almost the same accusation about Phil Angelides, back in 2006. In a story published on March 16 as he faced Garry South’s candidate, Marinucci dredged up an 17-year-old story about Angelides raising wads of cash from corporate donors to the California Legislative Forum. Just like her latest attack on Brown, Marinucci alleged the state Treasurer had found an end-run around campaign contribution limits to help rich donors influence elected officials.

At the time, my colleague Randy Shaw panned the story as a “classic example” of political propaganda. “Arnold [Schwarzenegger] has raised millions from special interests while serving as California’s Governor,” he wrote. “Angelides did his fundraising as a private citizen … There’s quite a difference between a Governor raising money from the special interests whose operations he oversees, and a private fundraiser who has no authority or influence over potential donors.”

Garry South ran Steve Westly’s campaign against Phil Angelides, and with Eric Jaye’s exit is now the chief strategist in Gavin Newsom’s campaign against Jerry Brown. One can expect a seasoned campaign operative to push a partisan story against an opponent, although few do it as brazenly as South. If the stories against Angelides and Brown had come directly from South, everyone would know the messenger had his own agenda.

But when the top political reporter of a major newspaper takes such attacks and puts them on the front page as “news,” it creates a serious problem with the public trust. Marinucci appears to have recycled the same line of attack against Brown she used for Angelides, which calls into question whether Garry South is feeding her these stories. It also sheds light on the Newsom campaign’s new strategy, and the direction South is taking it.