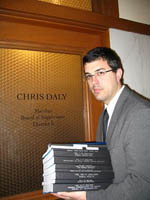 In the ninth paragraph of a ten graph story on the San Francisco Board of Supervisors support for police foot patrols, the October 25 San Francisco Chronicle noted that “the board voted unanimously to place $2.5 million requested by the mayor’s office for police overtime and other law enforcement funding on hold until supervisors consider authorizing the spending later in the year.” The paper also cited the budget analyst’s conclusion that the funding request was premature. But on September 23 and October 6, the Chronicle told its readers a different story: that of Supervisor Chris Daly “blocking” a hearing on the police funds and putting the public safety at risk due to “political gamesmanship.” As it has done throughout his career, the Chronicle simply lied about Daly’s actions for political purposes, apparently believing that the Supervisor must be defeated by all means necessary.

It would certainly be understandable if District 6 residents blamed Supervisor Daly for crime problems in the neighborhood. After all, the Chronicle keeps writing that Daly is blocking the hiring of additional officers, while ignoring Daly’s role in bringing foot patrols to the Tenderloin (Supervisor Mirkarimi deserves the major credit on this issue, but it was Daly who fought for Tenderloin patrols over police objections).

Now the Chronicle admits on October 25 that it was lying about Daly blocking police funding. It now reveals that Daly’s position on the budget issue was the same as all of his colleagues, and that this position was recommended by the Board’s budget analyst.

Why then did the Chronicle publish stories whose headlines accused Daly of “stalling” and “blocking” extra funds for police? Because it was coordinating its news stories with anti-Daly mailers attacking the supervisor for not supporting police efforts to fight crime.

It’s a smart strategy. Voters get political mailers claiming Daly is anti-police funding whose allegations are then “independently” supported by stories in the Chronicle.

And the tactic works even better when these political hit pieces are legitimated by including quotes clips and photos from these “objective” Chronicle stories.

While newspapers like the Chronicle are not supposed to serve as adjuncts to political campaigns, the paper always picks some races in which it plays the role Fox News plays for the Republicans. That’s why the Chronicle has worked in earnest to rebuild the reputation of Arnold Schwarzenegger from the day after his massive initiative defeats in November 2005, and why the Chronicle fabricates and slants news stories about Chris Daly.

The framing of the false stories about Daly singlehandledly holding up police funding was a function of the headlines. Chronicle editors, not reporters, write these.

So the true source of the Chronicle’s distortion of the news for political purposes is no mystery.