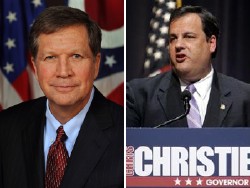 New Jersey Governor Chris Christie is a rising star in national Republican politics, with many even pushing him to run for President. The media extols his “aggressiveness” and “momentum” in getting things done. Ohio’s Republican Governor John Kasich is similarly praised for his “remarkable success” and getting off to a “smooth start” since his election last November. But stories on these and other Republican Governors avoid analyzing the substance of their “success.” Christie and Kasich have attacked public employees and unions, slashed funding for public schools and reduced the basic functions of government. Both backed greater income inequality, with Christie vetoing a tax raise on millionaires and Kasich repealing the state’s estate tax. The media could interview those likely impacted by these destructive cuts on programs assisting the middle and working class, or at least remind readers of how these policies brought economic failure under the Bush Administration. But for many reasons, it does neither.

Imagine if a progressive Democratic Governor won enactment of sweeping measures that resulted in their approval numbers falling to around 40%. The media would argue that the public opposes the Governor’s agenda, and cite experts claiming the Governor had “gone too far.”

But in New Jersey Governor Chris Christie’s case, the media’s fascination with his “blunt talk” in defending unpopular actions is framed as a positive. Although more of the state’s voters disapprove of his policies than approve, the New York Times found a pollster to say “the fact that his approval ratings haven’t dipped below 40 percent shows how much his style and personality still resonate positively for a lot of people.”

That’s right. As long as Republicans can maintain 40% approval, they can ignore the other 60% with impunity.

Of course, the media could interview those directly hurt by Christie’s “momentum” – teachers, the low-income schoolchildren facing larger classes, or the many working and middle-class residents impacted by the Governor’s service cuts – but that would undermine their positive framing of his “success.” As a result, most media coverage of opposition to Republican Governor’s actions relies on statements from Democratic politicians and political scientists – not the community organizations, labor unions, or faith-based groups whose members will feel the pain.

What all the tributes to this new class of “take charge” Republican Governors has in common is the avoiding of any historical context. As Paul Krugman routinely points out in the broader economic context, “with stunning speed, the lessons of the 2008 financial crisis have been forgotten, and the very ideas that got us into the crisis — regulation is always bad, what’s good for the bankers is good for America, tax cuts are the universal elixir — have regained their hold.”

Less than three years after the 2008 financial meltdown, Christie, Kasich, Wisconsin’s Scott Walker and even Florida’s Rick Scott are treated like new kids on the block, flush with never tried before ideas to revive the economy. One would think that a reporter and/or editor would feel obligated to note that these Republican policies are hardly “new” and that their past experience has brought failure and greater inequality and public hardship.

Or at least highlight in Christie’s case that the majority of the public has not been fooled, with a story framed around a Governor’s willingness to ignore most voters in his zeal to protect the rich.

The traditional media relies on promoting new political “stars” no less than the entertainment world is already grooming the next Justin Bieber or Lady Gaga. And they are so desperate to cast this latest incarnation of right-wing Republicans as the next new thing that exposing their re-branding of the failed policies of the recent past must be avoided (recall the furor over David Stockman’s legendary 1981 interview when he acknowledged that supply-side economics was just a new term for “trickle down”).

When a progressive talks about reducing income inequality, they are described as a “demagogue” and the media gives ample space to those charging them with fomenting “class warfare.” But when Christie, Kasich and other Republicans protect millionaires and do not back down when challenged, the media framing praises their “blunt talk,” “humor,” and refusal to be embarrassed.

It’s much easier for reporters to call up a political consultant or Democratic leader to get reaction to a Republican action (or vice versa) than to go out and actually talk to people impacted by political decisions. And in our era of constantly updating news online, few reporters have time for such coverage.

What this means is that an increasingly insular world of politicians and political insiders become the barometers for political actions, despite their rarely even speaking to an unemployed or working-class person in their daily lives. Relying on these pundits and insiders sure makes it easier to quickly produce the counter-reaction editors demand, but the human impact of political decisions is lost.

Eliminating this human element allows Christie, Kasich and others to avoid appearing like plutocrat-serving elitists who do not care about common people. This protects the media from accusations of “liberal bias,” but it also means the media is complicit in furthering the nation’s steadily increasing social and economic inequality.

The media sometimes offers long stories on the plight of the long-term unemployed, overcrowded classrooms, or the difficulties faced by millions trying to simply make ends meet. But their problems are disconnected from any government actions by the Christies or Kasichs’. And their often gripping personal accounts will likewise be omitted from the triumphal accounts of Republican Governors’ political “momentum.”