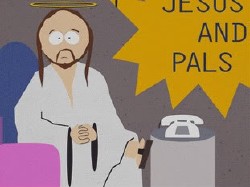 In fact, they’re so pissed that they formed a new coalition called CARB, Coalition Against Religious Bigotry. Too bad, it’s not “Coalition of the Religious Against Penises” (something else they don’t like), because then they could be CRAP – a more appropriate acronym.

CARB is throwing a holy hissy fit over the proposed series, which would feature a regular-guy type Jesus, who is living in the Big Apple to escape his “powerful but apathetic father.”

To prove that this is yet another instance of “Christian bashing” by the big bad boys and girls at Comedy Central, the group has posted a video showing clips of the JC character on South Park, perhaps the network’s best known series. It may be tasteless to some, but it’s hardly bashing of any kind.

CARB also has its undies in a knot over what it calls Comedy Central’s “double standard.” It points to the recent decision by the network to prohibit portrayals of Mohammed after some Muslim groups went into an uproar about South Park’s depictions of him.

A double standard it is.

But it’s a double standard based on the very real fear of retaliation by fanatics who have stirred up violence and even committed murder when someone dared to depict the face of their prophet (which is forbidden in their religion).

Is this what CARB wants for “the land of the free”–mockery or satire of Christianity equals death? Face it, if this were the bad old days of the Holy Roman Empire, the creators of South Park would be in a dungeon being tortured mercilessly before they faced the most painful death church fathers could concoct.

As a gay man who was fagbashed several times in my younger days, I find it offensive that these humorless clods would proclaim themselves victims of the kind of discrimination and hatred I face every day.

Christians have enjoyed majority status for all of this country’s history. For decades, they pressured Hollywood and television to censor America’s entertainment. Now, because things have loosened up and artists are a little freer to express themselves, right-wing Christians cry discrimination and bigotry. Grow up.

Programs such as South Park have done their fair share of satirizing Christian beliefs, which CARB members find offensive, but that’s the price of living in a free society. CARB has every right to protest until the cows come home and copulate, but in a society where one of the major school textbook markets re-writes American history to suit its Christian bias and Sunday morning TV is dominated by Jesus hawkers selling their rancid snake oil, what do they really have to complain about?

If it’s loss of followers they’re worried about, I have news for them. JC is not the greatest threat to their stranglehold over the opiated masses.

Their own hypocritical preachers and priests, who condemn sex outside heterosexual marriage and then screw everything that moves, including kids, are doing a much better job of turning people away from them.