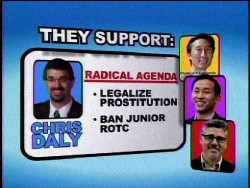 Chris Daly has appeared so prominently in hit pieces against progressives in Districts 1, 3 and 11 that an uninformed voter probably thinks the District 6 Supervisor is on the ballot this year. Heavily-financed Downtown attacks on Eric Mar, David Chiu and John Avalos remind me of the successful strategy progressives used in 2000 by tying their opponents to Mayor Willie Brown—who at the time was likewise deeply unpopular. But unlike Brown, who ruled City Hall with an iron fist, progressive Supervisors won’t be taking orders in January from a lame-duck Supervisor who will be termed out in two years. Even speculation of Daly becoming Board President doesn’t hold muster—as a progressive sweep would probably put Ross Mirkarimi in that position. In fact, guilt-by-association smears with Daly might not sink progressive candidates, but could look more like 2002—when progressives failed against District 8 candidate Bevan Dufty after pulling the Willie Brown card. Sometimes, an effective campaign strategy can outlive its usefulness when it’s worn out its welcome.

The main bogeyman in this election season isn’t even on the ballot. For weeks, the Association of Realtors have run ads on cable TV against progressive candidates by calling them Supervisor Chris Daly’s “puppets.” And that doesn’t count the thousands they’ve spent on hit pieces. One mailer, for example, even featured Daly as an iceberg—and warned voters not to hit it by electing his endorsed candidates.

The “Yes on V” campaign—which supports JROTC but is really a soft-money funnel to attack progressive candidates—disclosed in their filings that they spent $5000 attacking Daly. Because he’s not even technically a candidate this November, they had to report it as attacking him for his race for the SF Democratic County Central Committee.

Downtown business interests know that Daly is unpopular, and want to drag down every progressive candidate for Supervisor through “guilt-by-association” tactics. In 2000, progressives ran a similar citywide strategy against Supervisor candidates in various districts. With Mayor Willie Brown deeply unpopular—it was the height of the dot-com boom, and the Mayor was insensitive to rampant development—progressives effectively ran against the “Brown Machine,” and a near-sweep of every contested race gave them a huge victory.

But will the playbook of “marginalize your opposition” work this time?

In 2000, Willie Brown did have control over the Board of Supervisors. Six of the eleven members were originally appointed by him, and he famously called them “my mistresses in need of servicing.” It wasn’t a stretch for District 1 voters to view Michael Yaki as the Mayor’s “puppet,” or Alicia Beccerill in District 3 or Amos Brown in District 11—because they had already proven to be rubber-stamps for his pro-developer agenda.

In 2008, it’s tougher to tie the three progressive candidates to Chris Daly. Eric Mar had originally planned to run for District 1 eight years ago (when Daly was still a tenant organizer), but a house fire prevented him from running that year. David Chiu may be a protégé of District 3 Supervisor Aaron Peskin, but certainly doesn’t take orders from Daly. And while John Avalos worked for Daly as an aide, he was recruited to run for District 11 Supervisor by labor unions and non-profit activists who’ve come to trust him as a strong policy advocate at City Hall.

Moreover, voting for a Supervisor candidate with the Mayor’s endorsement really is a vote for the Mayor’s agenda—as the legislative branch is supposed to be a “check” on executive power. In 2000, voters who felt Willie Brown had too much control sent a message by kicking his allies out of office. But while Chris Daly may be unpopular, he doesn’t have much power as a single Supervisor—so rejecting his favored candidates isn’t much of a statement.

But wouldn’t electing his “cronies” make Chris Daly the next President of the Board of Supervisors? Moderate candidates are certainly trying to make that case—read Ahsha Safai’s closing statement at a District 11 candidates forum—but it’s not going to happen.

There’s only one way Daly could ever hope to get six votes for Board President, and it requires three things. First, progressives must sweep Districts 1, 3 and 11. Second, Eric Quezada (Daly’s choice for District 9) would have to beat Mark Sanchez (who is endorsed by Ross Mirkarimi, Mark Leno and the Sierra Club) and David Campos (who has Tom Ammiano, the Bay Guardian and the Democratic Party.) Third, Daly would then have to rally at least three of his new colleagues to form a “bloc” against Mirkarimi—convincing him not to run for Board President.

Mirkarimi has also endorsed the three progressive candidates in D1, D3 and D11—so they will be inclined to favor him for Board President. The specter of Daly as Board President is nothing more than a scare tactic that moderates are using with voters.

Unlike Willie Brown, who in 2000 still had three years in office left, Chris Daly is in the final two years of his tenure on the Board. Making the races for Supervisor a referendum on Daly is another example of politicians relying too heavily on a strategy that wore out its welcome. Downtown business interests used Daly to beat Question Time in 2007, and the Bayview Affordable Housing Initiative in June 2008. But with Daly on his way out, you can only use a winning strategy so many times.

In 2002, progressives—encouraged by their prior successes of running against Willie Brown—repeated the same tactic in District 8. Bevan Dufty was the Mayor’s candidate, so the Harvey Milk LGBT Democratic Club (which endorsed Eileen Hansen) paid to put up signs all over the Castro that read: “Willie Brown Supports Bevan Dufty.” But Brown was a lame duck, and voters felt that association was irrelevant. The signs were probably counter-productive, as they also gave Dufty massive name recognition for casual voters.

As Downtown continues to play the same game, voters have already moved on.

EDITOR’S NOTE: Paul Hogarth has volunteered—outside of work hours—for David Chiu’s District 3 campaign, but does not play an advisory or strategic role. He did not consult with the Chiu campaign when writing this article.