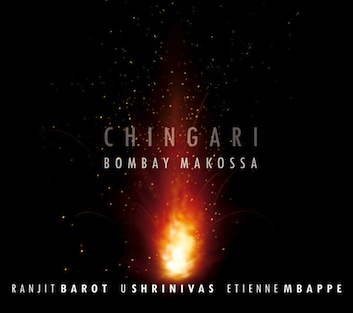 One of the world’s best percussionists, Ranjit Barot has joined forces with bassist Etienne Mbappe and U. Shrinivas on mandolin, to create a fabulous new album, due to be released on September 10th. “The word chingari literally means ‘a spark’ in Hindi,” explains Barot. The internationally renowned, Mumbai-based composer and drummer has taken the word as the name for a new trio featuring himself, Southern Indian mandolin virtuoso Shrinivas, and Cameroonian bassist and vocalist Mbappe. “My thought behind the name was a spark, yes,” he adds, “but one which lights a big fire.”

“On their debut album Bombay Makossa – available September 16, 2014 on the Abstract Logix imprint – the three musicians mine their richly divergent experiences to create a dynamic, fluid hybrid sound that fuses the rhythmic intricacy and improvisational fervor of South Indian Carnatic music with the infectious buoyancy of Cameroonian sounds, bridged by a shared love of jazz, second-line funk, and the shimmering textures and grooves of modern pop.

“I’ve always been fascinated by the meeting points in our different cultures,” Barot explains. Chingari began as his vision, the lineup drawing upon connections he had made within both western jazz- and rock-influenced settings and Indian classical music. “I’ve had the pleasure of performing with Mandolin U.Shrinivas, and Etienne and I have toured extensively with John McLaughlin’s 4th Dimension,” he continues. “So I understood and was familiar with how the rhythm section would sound and feel like. It was only when I heard Etienne sing with his band Su La Také that I felt that the worlds of India and Africa could collide in the most beautiful if ways. And who better to compliment this idea but one of India’s most cherished sons, Mandolin U. Shrinivas.”

“After few months of playing together with 4th Dimension,” Mbappe recalls, “Ranjit told me about this project. I was really excited by the idea and to play with U. Shrinivas, whose playing I knew from his work with John’s Remember Shakti band. And, from hearing Ranjit’s first album Bada Boom, I knew he was a great writer.”

“Despite our different styles of playing,” Shrinivas says, “I feel we share the enthusiasm to bring about some great music. Ranjit is a great musician whom I adore. We’ve known each other for many years, and when he asked me if I could play in this album I immediately said yes. As for Etienne, I first heard him play with John McLaughlin, and could tell he was also an incredible musician.”

Indeed, Mbappe’s nimble, flexible baselines and hauntingly soulful vocals form the focal point of Bombay Makossa. Barot, the album’s primary composer, explains, “All the melodies I wrote were keeping Etienne in mind as the medium through which they would be expressed. His voice, his timbre, these were things I was familiar with by now and the songs were specifically written to address those aspects of his personality.”

“I just embraced Ranjit’s compositions naturally,” Mbappe explains. “He gave me the liberty to develop and sometimes suggest alternate basslines and grooves. Same for the vocal melodies. Some were already written and I just wrote lyrics in Douala, my mother tongue. I also created some new melodies and lyrics where needed. Sometimes, for the lyrics, Ranjit gave me a title of a song or told me a story, and I let my mind go. The music talked to me, and the inspiration was there.”

“I heard Shrinivas,” Barot continues, “as narrative vessel from India who would ‘answer’ Etienne, so to speak, through his own unique mode of expression.” Before his tenth birthday, U. Shrinivas was already impressing audiences with his uncanny ability to adapt the mandolin to the demanding rigors of traditional South Indian music. While keeping his roots in the Carnatic tradition, Shrinivas has sought a wide range of outlets for the ecstatic, almost vocal quality of his playing. George Harrison numbered among his fans, and he has been featured as a member of Remember Shakti, alongside guitarist John McLaughlin and Zakkir Hussain. Wielding a six-string electric instrument, his performances on Bombay Makossa make full use of his formidable technique, resourcefulness, and willingness to probe boundaries and explore new territory.

“Most of the pieces were tricky to perform,” Shrinivas says of Barot’s intricate, multi-part compositions, “and yet, Ranjit gave me a lot of freedom to play in my own style without disturbing the structure of the tracks. Each one was different, and I felt that I had to do justice to every one of them.”

Bassist Mbappe is no stranger to complexity, having played a pivotal role in legendary fusion guitarist John McLaughin’s kaleidoscopic 4th Dimension quartet since 2009. Mbappe’s gift for tackling the most challenging rhythmic structures with ease and fluency first won the Cameroon-born and Paris-based musician membership in the bands of Salif Keita and Manu Dibango. Now, in addition to performing with the 4th Dimension, he can be heard in the all-star fusion group the Ringers with Jimmy Herring and Wayne Krantz, as a solo artist, and with the multi-faceted Su La Také.

As producer and composer, Barot faced the daunting task of reconciling each member’s respective musical style and forging a coherent, compelling new sonic identity. Such eclectic undertakings are not unfamiliar to Barot however, as his distinguished career has found him excelling in as a composer Bollywood’s competitive film scene and as a distinctive drummer more western-influenced contexts. The son of Sitara Devi, India’s famous traditional Indian dancer, Barot is also steeped in Indian traditions, as demonstrated by his mastery of konnakol– the Carnatic tradition of spoken percussion syllables, which he demonstrates on Bombay Makossa.

“My time spent working in films has given me a cinematic approach to viewing certain aspects of my music,” Barot explains, lending insight into his writing process. “Not in a grandiose way, but more in the storytelling aspects of composition that I learned while scoring films. Then there’s the rock angle which is a large part of my vocabulary. I grew up playing in local rock bands in Bombay, both progressive and completely visceral. And of course, jazz and the blues.”

And the result is Bombay Makossa: an unprecedented synthesis of international traditions that reflects the vast legacies involved while still emerging as wholly organic, uniquely personal, and even conversational its musical exchanges. “This music brings Africa really close to India,” Mbappe concludes. “Even though these are two major places with their own huge musical culture and so many different rhythms and dances, a project like this doesn’t exist as far as I know. U. Shrinivas, Ranjit, and myself grew up in very musical neighborhoods, surrounded by a lot of different rhythms. We share the same love of celebrating life, and music is a huge part of our lives. It is all soul food and love, and with this album, we’re just warming up.”