Chicago Strike Comes at Crossroads For Our Schools 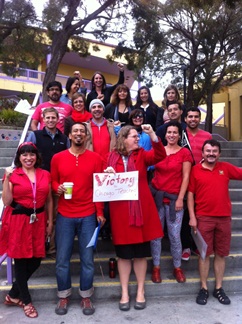 The current strike by public school teachers in Chicago comes at a crossroads for public education in this country. The national media is busily portraying a fairy tale version of that difficult situation: the evil, greedy, teachers as making outrageous demands for more pay while refusing to be held accountable to their students. Meanwhile, Mayor Rahm Emanuel, in his suit of shining armor, is portrayed as having a will of steel, boldly representing the best interest of students.

In fact, the teachers in Chicago aren’t striking primarily over money, or even over a longer school day, as is suggested in the press. They are striking because they want smaller class sizes, more services for their students, and a well-rounded curriculum. They are striking because instead of working with them on these issues, Mayor Emanuel instead seeks to radically re-invent Chicago’s public schools by tying teacher evaluations to test scores, instituting merit pay based on those test scores, and opening privately-managed schools to replace low-performing schools.

Though all the rage these days, these reforms—or what education researcher Diane Ravitch calls “deforms– have never been shown to be effective in broad-based, independent research. What is clear is that such measures force teachers to narrow curriculum, to teach to the test, and to take all of the joy out of learning. The students who need the most help, the most dynamic curriculum, and the most dynamic teaching, instead are force fed rote lesson plans designed to help them fill in bubbles on tests and marginally increase scores.

Mayor Emanuel may have overplayed his hand in Chicago, but the same type of policies he seeks to implement are spreading across the country, even here in the liberal bastion of San Francisco.

Last spring, teachers and paraprofessionals in San Francisco were nearly forced to go out on strike to protect the fundamental building blocks of our public schools. In contract negotiations, with the blessing of the School Board, the district sought to raise Kindergarten to Third grade class sizes by up to 25%, to permanently eliminate vital supports for High School students, and to radically restructure the Early Education program by eliminating the guarantee for summer-time instruction. Such cuts were called at the same time the district was handing our raises to central office staff, and central office spending was budgeted to increase by over 4%.

The members of United Educators of San Francisco voted 97% in the first of two strike votes, and were prepared for a strike to open this school year. Fortunately, cooler heads prevailed in the SFUSD and the district dropped most of their more outrageous demands.

The teachers and paraprofessionals in San Francisco are proud to stand with the public school educators in Chicago (link to resolution: http://www.uesf.org/wp-content/uploads/uesf-reso-ctu-support.pdf). Like the brave teachers in Chicago, we are being pro-active in helping to reform our schools.

We’ve strengthened teacher evaluations, we’ve worked hard to improve curriculum, we continue to promote community schools with wrap around services, and we’ve done everything we can to fight for adequate funding for our schools.

Demonizing teachers in their quest to better serve students is only a short step from demonizing students for needing all this help. Those who travel such a disastrous path had better know that it leads to a future that lies at the bottom after a long drop off a high cliff.

This is not the path we want for our schools, our future, and our children.