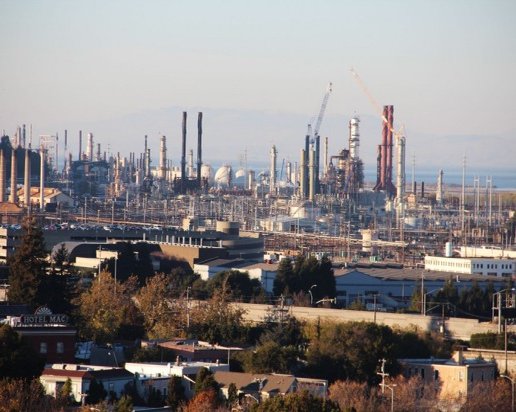 The Chevron refinery has long been a physical presence in Richmond. But this election year, more so than any time in the company’s history here, Chevron has nakedly embedded itself in local politics.

Chevron has poured millions into a campaign committee to influence Richmond’s mayoral and City Council elections, and the unprecedented spending has fueled questions about what the oil titan hopes to achieve with the best city government its money can buy.

Why so much and why now?

“If you’re Chevron, you’re probably asking yourself, ‘Why not?’” said current councilmember and mayoral candidate Tom Butt. “There’s no reason you wouldn’t want to control the city that in turn has regulatory control on your investment.”

Such large amounts of money might “offend people’s democratic sensibilities, people who might otherwise be uninterested,” he said. “Throwing your weight around that excessively is just going beyond the pale.”

That weight has already amounted to about $3 million in the company’s campaign committee, Moving Forward. The money supports Nat Bates for mayor and Donna Powers, Al Martinez and Charles Ramsey for City Council. Almost $1 million of the chest has funded a flurry of hit pieces and commercials denigrating their opponents, candidates who are members of the Richmond Progressive Alliance.

The $3 million this year is a further escalation of big spending since 2010, when the council came under non-Chevron control for the first time ever. In 2012, Chevron spent $1.4 million trying to fill three council seats with its three favored candidates, while opposing progressive candidates Eduardo Martinez and Marilyn Langlois. In that race, two of the Chevron-backed candidates, Nat Bates and Gary Bell, won. But Bell fell ill and died before he could take his seat. Martinez and Langlois finished fourth and fifth, respectively.

The RPA, spearheaded by Mayor Gayle McLaughlin, points to two likely reasons Chevron seems so bent on gaining a majority of the council (four of seven) on this next term. First, the company wants selective, soft oversight on its $1 billion modernization project. Second, a Chevron-sympathetic council could reduce the asking price on the 2012 refinery fire lawsuit—or throw it out all together.

“They don’t want us to put a critical eye on refinery operations,” McLaughlin said.

Chevron spokesperson Braden Reddall said the company’s campaign is focused on an effort to ensure a business-friendly Richmond.

“Chevron supports city leaders who share our commitment to policies that foster an economic environment,” he wrote in an email, “where business can thrive and create jobs to make Richmond an even more attractive place to live and work.”

McLaughlin said that even before the smoke from the refinery fire rose in 2012, a stigma lingered in Richmond’s air.

“Businesses and families think twice about coming here,” she said.

Progressives say the company has fueled that stigma with a history of cutting corners and substandard environmental and safety considerations. But if the city holds Chevron’s nose to the grindstone, the modernization project could be an opportunity to reverse the trend.

Jeff Kilbreth, a planning commissioner and member of the RPA, said the modernization project at this point only modernizes 20 percent of the refinery.

Chevron gets more than 10 percent of its global sales from the Richmond refinery, Kilbreth wrote in an email. “And it spends around a fourth of one percent of its capital budget maintaining and upgrading it to world class standards.”

Last year, Chevron Corp. reported more than $21 billion in net income and $220 billion in revenue. Kilbreth said the company has the resources, but not the desire to improve efficiency and reduce pollution at its refinery.

“Pollution is free, so there is no economic reason to reduce it,” Kilbreth wrote.

The city is looking to make sure no such discount will apply to the refinery fire lawsuit, which could cost the company hundreds of millions.

The fire, caused by a pipe rupture, shut down the refinery’s no. 4 crude unit for months and sent about 15,000 residents to nearby hospitals complaining of respiratory ailments and other maladies.

The City Council voted unanimously to sue Chevron after failing to reach a settlement with company executives. It was the first time the city has ever sued its largest taxpayer.

Richmond chose a law firm, Burlingame-based law firm Cotchett, Pitre & McCarthy (CPM), with a proven track record of holding companies accountable to the cities in which they operate.

The firm successfully sued PG&E for $70 million following a 2010 gas line explosion in San Bruno. CPM could not be reached for comment.

The same month the city’s civil suit was filed, Chevron agreed in a criminal suit to pay $2 million in fines and restitution after pleading no contest to six misdemeanor criminal charges stemming from the refinery fire.

According to the suit, the city is seeking financial compensation for economic losses incurred from emergency response to the fire, environmental harm and stigma that causes loss of value in city property.

The company has argued that economic growth is exactly why so much money has moved from the refinery into Richmond’s political and economic channels.

According to a 22-page report released earlier this year by Beacon Economics, which was commissioned by Chevron, the refinery accounts for $76.5 million in total economic output in Richmond every year—millions of which percolates through various nonprofits in the city.

But Moving Forward, echoing Chevron’s sentiment, maintained that the committee supports candidates that would help to grow the local economy.

“This is an important election for Richmond’s future,” spokeswoman Alex Doniach wrote in an email. “Our hope is that…voters will elect representatives who are best suited to continue to improve the local economy and therefore the overall quality of life in Richmond.”