Chevron: The Toxic Threat Next Door 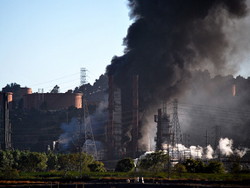 When the fire broke out at the Chevron oil refinery in Richmond, California last week, this is what families living nearby–including some of our own staff at Green For All–experienced: Their windows rattled and their houses shook. Some of them watched fiery explosions and plumes of dark smoke pour from the refinery. Others just heard the frightening wail of the city’s emergency sirens. They gathered up their children and pets, covered their mouths and noses, and scrambled to seal their doors and windows.

Across the Bay, San Francisco residents watched as a toxic black cloud billowed over Richmond–a city in which 85 percent of the residents are minorities and roughly one-quarter live below the poverty line.

In the days after the fire, more than 9,000 people poured into emergency rooms, complaining of nausea, headaches, and breathing problems. Chevron, meanwhile, offered an apology for the “disruption.”

I wish that were enough. Enough to erase the terror that workers and families experienced that day. Enough to prevent the potentially long-term illnesses they face as a result of breathing those toxic fumes. And I wish it were enough to undo the health problems that Richmond’s families have faced for years.

The truth is, it doesn’t take a massive explosion to send folks in this neighborhood to the hospital. Here, next door to the refinery–which has consistently violated the Clean Air Act and the Clean Water Act–rates of ovarian, prostate, and breast cancer are among the highest in the state, along with incidents of childhood asthma.

But it’s not just about Richmond. Across America, hundreds of other cities choke in the shadow of dangerous, polluting oil operations. Who lives in these cities and neighborhoods? By and large, people of color. In California, a staggering 62 percent of residents living near polluting oil refineries, cement plants, and power plants are people of color. Not surprisingly, rates of asthma are dramatically higher in these communities: One out of every six African-American children in this country suffers from asthma, compared with one in ten nationwide.

No one–whether they’re from Richmond or anywhere else–should have to live in fear of this kind of disaster. They shouldn’t be forced to breathe toxic fumes or drink polluted water just because companies like Chevron refuse to clean up their act. This is a corporation, after all, that raked in almost $27 billion in profits last year–but failed to spend any of it to fix the leaky 40 year-old pipe that almost cost its workers and neighbors their lives.

But we don’t need to wait around for Chevron to do what’s right. We have a choice. We can embrace cleaner, safer, healthier forms of energy and leave oil where it belongs–in the last century.

The first step is to stop rewarding companies like Chevron and BP with billions in subsidies from taxpayers’ pockets while we ask hardworking Americans–especially low-income and minority kids–to pay the price with their health. Instead, we should invest in forms of energy that don’t pollute our air and water.

This isn’t a distant dream; the clean energy revolution is already well underway. Over the past four years, America’s wind and solar sectors have grown substantially–wind power has doubled and solar increased six-fold–enough to power 15 million homes. We’re less dependent on fossil fuels than we have been in decades. And the Bureau of Labor Statistics estimates that clean energy and other industries that protect our air and water already employ roughly 3.1 million Americans in safe, good-paying jobs that can’t be shipped overseas.

The fight for clean energy is not just an environmental issue. It’s a human rights issue.

Every child deserves to breathe clean air and drink clean water. No matter whether they’re rich or poor, no matter whether they’re black, white, Asian, or Latino. We all deserve to live without the fear of a toxic disaster next door. It’s that simple. But in this country, people of color have shouldered the burden of polluting industries for too long–and it’s time to stop.

All we have to do is decide: Do we stand by and wait for the next oil disaster? Do we sit quietly while our kids struggle to breathe? Do we continue to spend our hard-earned dollars rewarding companies like Chevron with subsidies and tax breaks? Or do we change the game?

Phaedra Ellis-Lamkins is the Chief Executive Officer of Green For All. This piece was earlier published at the website Common Dreams.