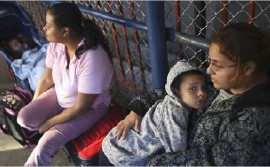 New York is charging the homeless to stay at shelters … You read that right. Because of legislation passed by legislators in the State Assembly in Albany in 1997, the City of New York is now billing homeless families with income who are living in city-run shelters. The amount varies, depending on factors such as the size of the family and its income. The rent can be up to 50% of the family’s earnings.

Vanessa Dacosta, a homeless single mother with a two-year-old, told the New York Times that she has to pay $336 of the meager $800 she earns as a cashier to stay in a shelter. “I pay my baby sitter,” she explained. “I buy diapers, and I’m trying to save money so I can get out of here. I don’t want to be in the shelter forever.”

Martha Gonzalez, who resides with her 19-year-old son in a shelter in Fort Greene, Brooklyn, was recently informed that she will now have to pay $1,099 of her $1,700 monthly income for rent. She plans to contest it in court.

About 2,000 of the city’s 9,000 homeless families are expected to be affected by the new policy.

New York officials were quick to try and justify the scheme. But no one could explain why the 1997 law is just now being enforced. Residents in shelters are being warned that if they don’t pay up, they will be kicked back out onto the streets.

Homeless advocates called the plan counterproductive and mean-spirited. According to Steven Banks of the Legal Aid Society, “What is happening is that we have seen cases of families being unilaterally told, without any notice of how the rent was calculated, that they must pay certain amounts of rent or leave the shelter. We’ve already had a case of a survivor of domestic violence who was actually locked out of her room.”

Patrick Markee of the Coalition for the Homeless said that the new policy “is going to make families stay in shelter longer because they’ll have fewer financial resources.”

If someone has to shell out half of their income from low-paying jobs on rent, how can they possibly save up money to get out of the shelters? This is especially true for single mothers with families. How can they possibly keep themselves and their kids fed and clothed and still put aside enough to get their own apartment.

The simple truth is that they can’t.

Tommi Avicolli Mecca is co-editor of Avanti Popolo: Italians Sailing Beyond Columbus, and editor of Smash the Church, Smash the State: The Early Years of Gay Liberation, which will be published in June by City Lights Books. His website: www.avicollimecca.com