Cesar Chavez Day and the Power of Activism 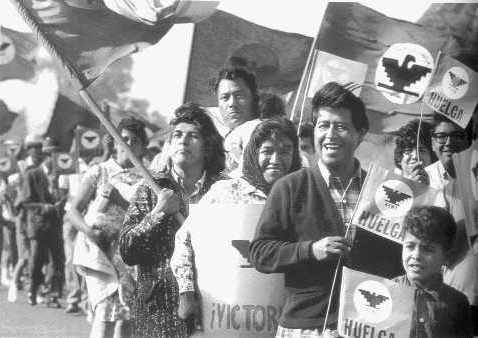 Today’s  Cesar Chavez Day comes 50 years after Chavez’s historic 300 mile march from Delano to Sacramento. The journey put Chavez and the farmworkers movement on the national stage. The past 50 years has seen remarkable growth in Latino political power, electoral clout, and in unionized Latino workers; sadly, the plight of farmworkers has declined since the UFW’s high point at the end of the 1970’s.

Chavez always insisted that bringing change would not be easy, and his legacy offers a powerful reminder that progress toward greater social and economic justice does not proceed on a straight path. In 2008,  Barack Obama harkened back to Chavez and the UFW’s legacy when he led crowds in chanting the farmworker rallying cry, “Si Se Puede” in its anglicized, “Yes We Can.” Eight years later, rulings by a right-wing Supreme Court, powerful corporate interests, and a Republican Party promoting obstructionism exposed the difficulty of securing transformative progressive change.

But the progressive idealism that fueled Chavez and his movement remain. We see this in #BlackLivesMatter and the #Fightfor15. We see it in the young people flocking to Bernie Sanders rallies and among Hillary Clinton supporters excited about the prospect of electing the nation’s first woman president.

Chavez and those who got their start as UFW activists knew well how quickly politics can turn. And the former UFW leader would be the first to argue that the opportunities for real change remain strong, and that it is up to activists to keep up the struggle.

Having written  Beyond the Fields: Cesar Chavez, the UFW and the Struggle for Justice in the 21st Century on the ongoing legacy of Cesar Chavez and the UFW, I  believe that today’s activists can learn much from the farmworkers movement. In past Chavez Day stories I urged readers to use Cesar Chavez Day to “rediscover Cesar Chavez,” focusing on how the UFW demonstrated the potential success of national grassroots campaigns, reinvented grassroots electoral outreach, and offered the greatest activist “incubator” of our times.

Cesar Chavez Day is a good time to recall how Chavez and the UFW experienced their own major setbacks through the 1960’s and 1970’s but surmounted them by never giving up the fight. It’s also a good time to order Gabriel Thompson’s just released new book on the legendary organizer Fred Ross, who trained Chavez in organizing.

In 1962, Cesar Chavez began a seemingly impossible effort to organize California’s migrant farmworkers. By 1966, Chavez had gotten national publicity and was building strong religious community support. While he did not have the best of relationships with California Governor “Pat” Brown (Jerry’s Dad) – Chavez did not hesitate to publicly criticize Brown just because the Governor was a Democrat – UFW pressure could move Brown to act favorably toward farmworkers.

When Ronald Reagan defeated Brown in the 1966 election,  eight years of offical anti-UFW hostility in California followed. Richard Nixon’s 1968 election aligned the federal government against the UFW as well.

Chavez and the UFW had played major roles in Robert Kennedy’s 1968 presidential campaign, and  Chavez  had a close personal bond with the man who but for his assassination would likely have won the presidency. The UFW’s Latino voter outreach for Kennedy was credited with his winning the California presidential primary that June, paving his way to the nomination.

A big difference between the mindset of Chavez and UFW activists and those today reflects our changing perceptions of time. Because tweets cross the world in seconds, some activists, the media and the larger society expect movement victories to occur instantly.

In some cases, like the Fight for 15, success in the form of minimum wage hikes has come in a surprisingly short time. But that is the exception. More common are the challenges confronting #BlackLivesMatter, whose impact is questioned because police shootings of unarmed blacks have not completely stopped.

Cesar Chavez never had a particular timetable or deadline for achieving key goals. When Chavez started organizing farmworkers, nobody knew it would take 13 years to win labor rights, or if the campaign would win even after two decades.

Over fifty years ago, Cesar Chavez dared to pursue a dream of organizing farmworkers. He had no government or foundation funds, no wealthy benefactors, and no online funding operation – all he had was the force of his personality and he and his wife’s commitment to the struggle. For all of the reversals, disappointments and challenges left unmet, Cesar Chavez created a legacy that inspires us to this day.

Randy Shaw is also the author of The Activist’s Handbook. His new book is The Tenderloin: Sex, Crime and Resistance in the Heart of San Francisco.