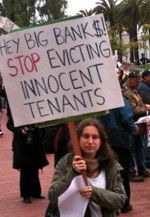 This is a remarkable accomplishment. Tenants across the state are inspired by what is happening in Merced. Tenants Together members have sent a clear message: Central Valley renters will no longer be pushed around by morally bankrupt politicians and abusive landlords.

Recent UC Merced graduate Anna Schoendorfer emerged as a local leader in the petition drive. She coordinated the month-long, member-led signature drive. Schoendorfer described the experience: “Our members petitioned daily outside of shopping centers, community events, door-to-door and to our friends and family. We met with thousands of Merced residents. Our neighbors recognize the need for this important law, especially since so many have been directly affected by foreclosures in the city. Despite the summer heat, we remained positive and stuck to our mission to qualify this referendum and keep tenants together.”

Passed in November 2011, Merced’s Just Cause for Eviction law protects tenants from arbitrary eviction by banks and investors after foreclosure. Since December, these evictions have been outlawed under Merced’s Just Cause for Eviction law. The law applies to foreclosed properties and prohibits evictions of renters unless there is specific cause (such as nonpayment of rent, nuisance, owner move-in, etc) for the eviction. Foreclosure alone is not grounds for evicting a tenant under the ordinance. The law has already stopped or postponed multiple evictions of tenants after foreclosure.

On June 4, 2012, the new members of the City Council – Mayor Stan Thurston, Mike Murphy and Tony Dossetti – along with Councilmember Josh Pedrozo, voted to repeal the popular anti-eviction law at the request of real estate industry interests, a move that prompted outrage among community members.

Members of Tenants Together immediately began circulating a referendum petition to overturn the June 4 action by the City Council and preserve the Just Cause for Eviction law. This is the first known referendum on a tenant rights issue in the Central Valley. To stop the city’s repeal ordinance from taking effect, the referendum petition must have at least 10% of the city’s registered voters and be collected within 30 days.

A successful referendum keeps the Just Cause for Eviction law in effect and returns the matter to the Merced City Council. The City Council will then face a choice: either vote to preserve the eviction protections or submit the matter to voters at the next regularly scheduled election or at a special election.

Tenants Together Organizer Guillermo Elenes noted the power of the growing renters’ rights movement in Merced: “Let’s put this in context. More Merced voters signed this referendum petition in 30 days than voted to elect the Mayor or any of the council members who are trying to take away these tenant protections. That should get their attention.”

Dean Preston is the Executive Director of Tenants Together, California’s statewide organization for renters’ rights. Tenants who are interested in getting involved with Tenants Together should call 1-888-495-8020.