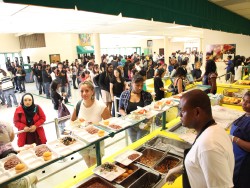 On Monday August 15th, students at San Francisco’s public schools got an unfriendly welcome back after summer vacation, when poor management at the production site of SFUSD’s meal provider left most schools with no hot lunches for the first day of class. Also affected were the 46 child development centers. Despite being made aware of problems at the local production facility in San Bruno as early as 8:00 am on August 12th, top management at Preferred Meal Systems, based in Illinois, failed to take appropriate action, and with just hours to go before the start of school, the lunches remained MIA. The still-chilled meals finally began showing up at schools around 1:00 pm Monday, after the end of lunch period. Schools had to scramble to try to offer hungry students cold cereal or anything they could manage to put together on little notice, and as of a week later, students, families, teachers and Principals are all still waiting for Preferred to offer an explanation or even just an apology for the disaster.

As a result, once again well-meaning voices are asking, “Why can’t they just scratch cook at every school?” Like so many other obvious “fixes” for the perceived shortcomings of school meal programs – “Why not just use Revolution Foods?,” “Why not just have the kids grow the food for the meal program in their school garden?” – the solution is never that simple.

Start with the fact that most schools in San Francisco no longer have kitchens that could be used for on-site cooking; the few that do are mostly middle and high schools, and even those kitchens which did do some limited scratch cooking until a few years ago are sadly in need of major upgrades. Although a tour of school kitchens reveals lots of industrial-sized cooking equipment, nearly every single piece is either broken or missing vital parts, most of which are no longer being manufactured for these 1980’s era dinosaurs.

At the same time, the district does not own a single blast chiller, an essential and very expensive piece of equipment necessary for getting cooked food to a safe temperature quickly. Schools don’t have enough refrigeration capacity to accommodate the fresh food necessary for onsite cooking for hundreds (or thousands) of students, nor do they have sufficient electrical capacity to run the additional coolers which would be required, or space to install them. Cooking onsite would necessitate major expenditure at every school with a kitchen, but it would also require more highly trained kitchen staff. Most cafeteria employees have had no culinary training and are not qualified to handle raw meat or poultry; these higher skill sets command higher salaries, so labor costs would also be higher.

A more reasonable solution for scratch cooking is to have a central kitchen, where all meals are prepared and shipped out to schools the day before serving. This is the same never-frozen model that high end school meal companies like Revolution Foods and Choice Lunch use. Cooking and shipping out for same-day service is too challenging in terms of delivery, and also for food safety reasons, such as having to keep hot food at a food-safe temperature from the time it is cooked until serving. Keeping food hot for that many hours also degrades the quality, turning it to mush; who wants to eat pasta – let alone broccoli – that has been kept hot for 8 hours?

The website of the Center for Ecoliteracy in Berkeley has a fascinating interview with Steve Marshall, president of The Marshall Associates, Inc., a food service consulting and design firm based in Oakland. Mr. Marshall has designed over 50 central kitchens for school districts around the country and is something of an authority on the subject.

According to Marshall, a rule of thumb for estimating the proper size for a school district central kitchen preparing over 1000 lunches is to figure one square foot per lunch; using that formula, an SFUSD central kitchen would need to be roughly 25,000 square feet, which would allow for some additional growth to the program currently serving about 23,000 lunches a day.

Mr. Marshall provides another rule of thumb for estimating costs. “Building costs will be about $300 a square foot for remodeling ($150 for equipment, $150 for interior construction), while building a new kitchen will cost an additional $50 a square foot for the outer shell.” Based on a 25,000 square foot facility, this puts the construction cost of a central kitchen for SFUSD in the $7-9 million dollar range.

Some have suggested that it might make more sense for SFUSD to have several smaller “hub” kitchens scattered around the City, perhaps housed in high schools, shipping out meals to other nearby schools. Marshall does not support that idea, calling it “inefficient.” He says, “Even if the district has enough space for that many kitchens — and many don’t — to have six managers, and six bakers, or six cooks at each of six sites is cost prohibitive. A central kitchen might have six cooks, depending on shifts, but that would be serving the entire district. There is economy in scale.”

What’s more, there are safety issues related to having a large scale food production facility located on a school campus, especially if it is in the same building where students attend class. When SFUSD had its two major production facilities located in middle school kitchens, giant 18 wheeler trucks delivering food and supplies used to roll across the school yard in the morning when students were present, and there was at least one near-miss in which a student barely escaped being run down. The noise from these trucks, and from the trucks which would pick up and deliver meals to satellite schools, and from the additional cooling equipment a hub kitchen needs, can all drift up from the kitchen area into classrooms and impact students’ ability to hear the teacher.

Marshall points out other downsides to locating a hub kitchen within a school. “The downside to expanding on an existing school site is that it’s typically in a residential neighborhood, invariably with houses just across the street. The neighbors may object to the visual expansion. Truck traffic will increase, probably fivefold. Instead of single purveyors delivering processed meals, often in quantities to last several days, many individual purveyors of fresh food will make deliveries at the kitchen door every morning. You must also add the impacts on neighborhood traffic of multiple district dispatch trucks leaving the kitchen to transport finished food to other school sites.”

For all of these reasons, the more sensible solution for SFUSD is one central kitchen, perhaps located in warehouse space the district already owns in the southeast part of the city. A large, well equipped and well staffed central kitchen with employees trained to cook from scratch, and supervised by a culinary school graduate, would at long last enable SFUSD to produce and serve the kind of healthy, locally grown, freshly prepared meals our students need for optimal health and learning. But this food paradise comes at a cost, and it would fall to the school district to figure out how to pay for it.

Is it really necessary to undertake such an enormously expensive project just to start scratch cooking for our students? Some point to districts like Greeley Colorado, which a recent article in the New York Times described as returning to scratch cooking for less than the cost of using processed food. But that school district already had a central kitchen in place, and still needed $273,000 in grant money to help pay for over $350,000 in necessary upgrades to the kitchen. What’s more, their pay scale is far below that of SF, with their lowest paid cafeteria workers earning just over $7/hour while a comparable position in SF pays twice that.

Once all of the infrastructure is in place, including the fully equipped central kitchen, and highly trained staff, it may indeed be possible to run the school meal program at little additional cost, serving higher quality meals. That would certainly be the goal in working towards a central kitchen-based model in SF. But getting to that state – building the central kitchen, equipping it, staffing it – are all enormous expenses which must be paid somehow. That is San Francisco’s challenge. Where will we find the money to do this?

One thing is for certain – the well-being of our lowest-income students, who make up the majority of those eating school meals, cannot be left to a company arrogant enough to not only ignore timely warnings of a production breakdown, but also to refuse to apologize to those who were most impacted by their failure. Preferred Meal Systems should no longer be the preferred solution for SFUSD’s school meals.