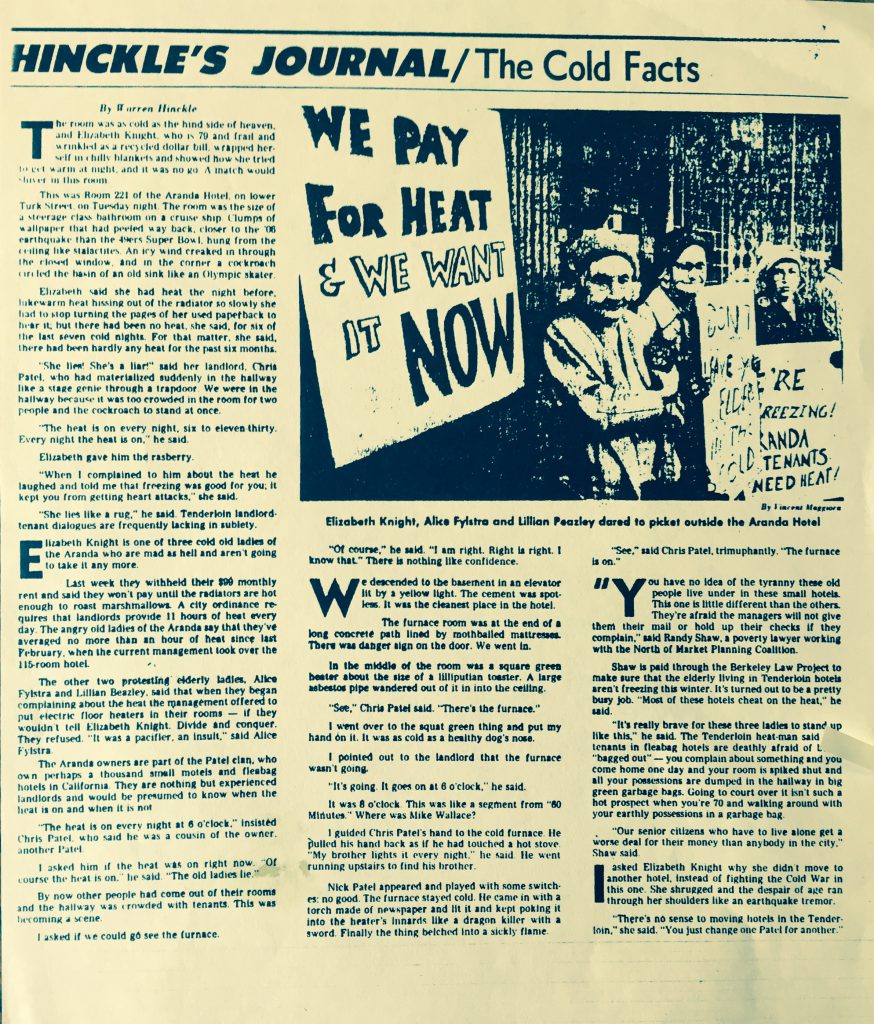 Warren Hinckle has died at age 77. I met Hinckle in 1982, and worked closely with him on stories from then through the 1990’s. This larger than life asset to San Francisco is off to the Dovre Club in the sky, but if you don’t know his story, or know only parts of it, read on.

I first met Warren Hinckle in December 1982 when he was a reporter for the San Francisco Chronicle. I still remember the excitement I felt when he called me in response to a press release I had sent out about seniors living without heat in a Tenderloin SRO hotel. We spent the next two months working together to first expose the city’s “heatless hotel” scandal and then to pass new laws to ensure it never happened again.

I had just finished law school and got funding to be the Executive Director and staff attorney for the Tenderloin Housing Clinic (THC). I was THC’s only employee. In those days, the San Francisco Chronicle set the news agenda for the rest of the media.

Hinckle stories appeared in the Chronicle with great irregularity. When they did make the pages the power of his words dominated the news cycle. I had been trying to get city action on the lack of heat in SROs since 1980 and when Warren Hinckle expressed interest I felt there was finally a chance to end this outrage.

Hinckle’s power came not only from his prose, but his presence. A large man with a black eye patch, he was a throwback to days of reporting past. At the time I did not know of his glorious history at the anti-war magazine, Ramparts (discussed in Peter Richardson’s excellent book, A Bomb in Every Issue). I would learn a lot about Warren Hinckle in the months ahead.

I gave Hinckle a tour of Tenderloin SROs on a very cold night. We met with tenants in their rooms. None had heat. Hinckle verified this himself by touching the cold radiators.

Warren really liked the Tenderloin and felt at home in the neighborhood. After our tour he took me to Gingers, a drag queen bar at Eddy and Mason where the Old Poodle Dog restaurant once operated (It had rooms upstairs for post-dinner interactions and its 1916 menu is displayed at the Tenderloin Museum). The bartender greeted Warren as if they were close friends, as did many of the bar patrons (who would be called transgendered women today).

I’ve never been a big drinker but soon learned that bars were central to Warren’s reporting process. I felt obligated to drink alongside Warren and will never forget his expression when I ordered a Pina Colada!

Warren was a hard drinking man yet I never saw his reporting faculties impaired by alcohol. The man was flat out brilliant—-my challenge was keeping him focused on the story as bartenders and patrons kept stopping by to talk.

Warren’s first story on the heatless hotel scandal, “The Cold Facts,” December 6, 1982, might be the single most impactful San Francisco news story of the past 35 years. It led to a full week of banner front page headlines about heatless hotels, and to demands for legislation to solve the problem.

I recount how Hinckle and I worked to expose and then pass new heat and hot water laws in two of my books, The Activist’s Handbook and The Tenderloin: Sex, Crime and Resistance in the Heart of San Francisco. It is a perfect case study of how activists can work with the media to win progressive change.

I have never seen a reporter so directly involved in passing legislation as Hinckle was on behalf of SRO tenants. Some may have seen this as crossing journalistic boundaries, but I saw it as Hinckle being so angry at what he saw in the SROs that he wanted to personally make sure they got heat once the crisis died down. Warren truly related to the oldtimers living in heatless hotels, and his passion was seen in the many follow up stories he wrote in the weeks ahead (which included titles like “A City’s Shame—The Way It Treats Its Poor”).

After our success in passing strong heat and hot water laws I got Warren involved in a new cause: stopping SRO landlords from locking out tenants rather than going through the legal eviction process. Warren again got directly involved in the story, and his pressure led to police arresting a hotel owner for an illegal lockout—a first in city history! Warren’s Chronicle story on the arrest sharply reduced illegal lockouts and stopped police from refusing to restore possession to locked out tenants by falsely claiming it was a “civil matter.”

Warren was now my go to reporter for every story. But getting him to write the story was another matter. I would talk to Warren about a story, he’d get all enthused, and then I wouldn’t hear from him for weeks.

I finally got to Warren to work on a story in 1984 about the attempted mass eviction at the then Somerton (now Diva) Hotel at 440 Geary. Warren met with the tenants, got all the facts, and then nothing happened. I checked with others who said that in their experience, a Warren Hinckle story was not certain until the photographer came out. In the Somerton case the photographer did come out and took some great group shots of the tenants facing eviction—but the story never appeared (we did stop the evictions).

Warren later explained to me that Fidel Castro had contacted him about an interview, which threw off his SF Chronicle schedule. Hinckle published a book in 1981 about the U.S. secret war against Castro, and wrote a follow up in 1993 adding the CIA, Mafia and the assassination of JFK to the anti-Castro mix.

Hinckle left the Chronicle in the mid-1980’s and moved to the then Hearst-owned Examiner. That led to his new editor’s David Burgin’s famous quote: “I gave Warren Hinckle an unlimited expense budget and he exceeded it.”  Hinckle now came to work and was regularly accompanied by his basset hound, Bentley; I’m not aware many other reporters were allowed to bring their dogs on reporting assignments.

Hinckle and the SF Independent

With the Examiner bleeding funds, Hinckle moved to the Florence Fang-owned SF Independent, ushering in an entire new stage of his career. The Independent was the successor to the SF Progress. It was a free newspaper delivered to residences three times a week, with the main issue on Tuesday.

The Independent became the leading voice of opposition to Mayor Art Agnos. This opposition was fueled by Agnos’ role in having criminal proceedings brought against political consultant Jack Davis and a member of the Fang family for their allegedly illegal role in opposing a 1989 ballot measure for a new Giants stadium. Davis defeated the charges and then dedicated his life to ending Agnos’ political career. His ally in that fight was his good friend Warren Hinckle.

The relationship between Warren Hinckle and Jack Davis was probably not made in heaven, but the two were a perfect team. Between Davis’ political genius and Hinckle’s ability to turn a phrase, a tabloid-driven war on Art Agnos commenced. Hinckle’s SF Independent columns bashed Agnos relentlessly, and helped undermine his political support.

Davis found Frank Jordan, a nondescript ex-police chief, to run against Agnos in the 1991 mayoral election. With Davis so committed to winning that he slept in the campaign office and Hinckle providing editorial support, Jordan shocked the city by unseating a mayor who had won 70% of the vote four years earlier.

I strongly opposed Mayor Jordan’s agenda and waged many successful campaigns against his efforts to hurt tenants. I grew estranged from the pro-Jordan Hinckle until I formed a partnership with Joe O’Donoghue of the Residential Builders Association (RBA) to put a measure on the November 1994 ballot (Prop G) creating a new Department of Building Inspection. A new Department was key to enforcing tenants’ rights, including the heat law that Hinckle and I had pushed so hard to pass.  O’Donoghue was close friends with Hinckle, so my connection to Warren resumed. Hinckle proved the top—and only—media ally that the Prop G campaign had in the daily press.

Hinckle was then also operating an Election Day newspaper called The Argonaut. In November 1994 he got Michael Huffington, the Republican opponent of Dianne Feinstein, to fund the entire paper in exchange for an Argonaut endorsement. In typical Warren fashion, on Election Day the Argonaut had no way to get many of its papers distributed. I got a frantic call from O’Donoghue asking if I could round up some tenants to distribute Hinckle’s paper. That’s how Warren indirectly got Michael Huffington’s money into our SRO tenants’ hands. (Huffington lost but the Argonaut-backed Prop G won).

Hinckle and I both backed Willie Brown in the 1995 mayor’s race, so we were back on the same political page. Over the next decade I regularly saw him at social events. Warren was often living in New York City in those days, and in the past decade I don’t believe he had a San Francisco reporting beat.

Herb Caen was the greatest San Francisco columnist over the past fifty years, and Warren Hinckle might well deserve to be viewed as the city’s most influential reporter. I know some of his colleagues were not happy with Warren, believing he got preferential treatment and resenting how much he got paid in light of his productivity. Some openly questioned his reporting skills, as Hinckle was not always right with the facts and could be prone to exaggeration.

Yet no San Francisco newspaper reporter over the past fifty years catalyzed San Francisco readers like Warren Hinckle. He was our version of the legendary San Francisco muckraker Fremont Older, and his flamboyance matched the spirit of former Chronicle Editor Scott Newhall. Warren Hinckle would have been right at home in the dizzying world of deadline journalism portrayed in His Girl Friday or The Front Page.

Warren Hinckle will never be forgotten. Warren created excitement when he walked into a room, as heads turned to see what he might do or say next. I’ve always felt lucky to have had my experiences with Warren Hinckle, and you can be sure he will have a memorable wake.