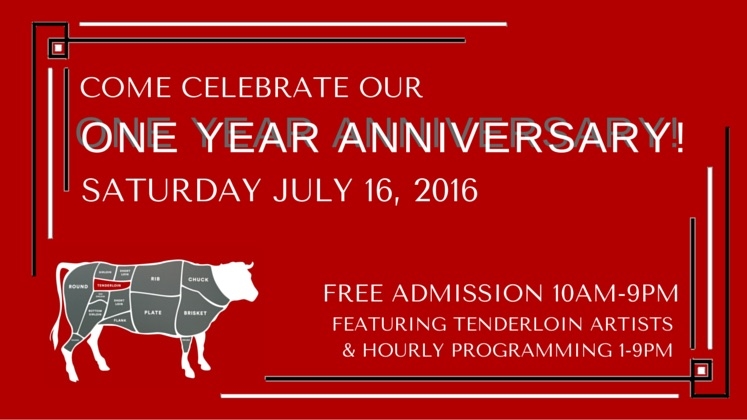 On July 16th, the Tenderloin Museum celebrates its one year anniversary with a free event with arts, music and cultural programming from 1pm-8pm.

It’s been quite a year.

Last December the UK-based Guardian honored the Tenderloin Museum as one of the top ten new museums in the world.  The museum drew raves from critics from Australia to Sacramento, with many surprised to discover how many Tenderloin events had national interest.

The museum has held powerful events with Cecil Williams and Janice Mirkitani, and Phoenix Hotel pioneer Chip Conley and longtime Chronicle music critic Joel Selvin came to talk about the Tenderloin’s past. Its monthly Monday at noon events have featured Willie Brown, Jane Kim and Aaron Peskin, an impressive lineup. Robert Zagone’s 1966 film, Drugs in the Tenderloin, proved so popular that sold out museum showings were followed by multiple sellouts at the Roxie Theater.

The museum has confirmed two long believed assumptions about the Tenderloin.

First, the strong attendance at evening museum events refuted the common belief that people would not come into the neighborhood at night. Museum backers always believed that people would visit the Tenderloin at night for something worth seeing, and the museum provided such events.

From 1907 into the 1960’s the Tenderloin was bustling at night as it was filled with attractive destinations. Now in addition to the museum there are crowds coming to Piano Fight, Bourbon & Branch, CounterPulse and other establishments.

The neighborhood is returning to its historic role as a nighttime destination, and its list of evening venues will soon include the Black Cat supper club across the street from the museum.

Second, the museum became the anchor institution that the Tenderloin has long needed to generate other positive investments.

As I describe in my book, The Tenderloin: Sex, Crime and Resistance in the Heart of San Francisco,  Tenderloin stakeholders have sought a “big economic punch” to jumpstart the neighborhood’s economy since the 1980’s. In the late 1980’s, it was hoped that a new Sizzler restaurant on the site of the current museum would provide this punch. It did not.

In the late 1990’s Glide and TNDC sought to create this punch by partnering with the Hilton to build a tourist pavilion at Eddy and Taylor. While some saw the pavilion as causing gentrification, its backers saw it as the necessary engine for Tenderloin revitalization (Glide and TNDC would get millions in affordable housing dollars as part of the pavilion plan).

The Hilton ultimately pulled out of the pavilion deal. The Tenderloin went through the dot com boom and housing bubble without generating new private investment. The search for an anchor institution continued.

Backers of the museum saw it as attracting people into the neighborhood and rectifying many of the false perceptions about the Tenderloin (which is why neighborhood tours were always part of the museum’s program). In that regard it has succeeded.

It’s not mere coincidence that more quality businesses (including King Carl’s Emporium as part of 826 Valencia’s Tenderloin Center) have open around the museum in the past year than in the preceding decades. And when the museum is combined with Piano Fight and CounterPulse anchoring a revived lower Turk, people from other neighborhoods are again spending time and money in the Tenderloin.

The museum’s permanent collection and Neighborhood Walking Tours offer locals and tourists alike an opportunity to learn the history of the Tenderloin and experience San Francisco’s most unique neighborhood, a history that has been routinely overlooked in historical accounts of San Francisco.  Central to Tenderloin history is the Compton’s Cafeteria Riots of August 1966, the 50th anniversary of which will be celebrated by the museum and the GLBT Historical Society next month.

The museum’s opening night event a year ago featured a panel with Susan Stryker and Victor Silverman, directors of the landmark film, “Screaming Queens”, and longtime transgender activists Tamara Ching and Veronika Fimbres. The Museum has served as an important reminder that the city’s gay, lesbian and transgender movements have their roots in the Tenderloin. The Tenderloin was the geographical center of the gay rights movement until the late 1960’s, when it moved west to Polk Street and the Castro.

So if you haven’t visited the museum, this Saturday’s free celebration offers a great opportunity. Here is the schedule of events.

Thanks to all who have supported the museum in the past year. If you are not yet a member, it is a perfect time to join.

Randy Shaw is Editor of Beyond Chron and a member of the Board of Uptown Tenderloin, which governs the Tenderloin Museum.