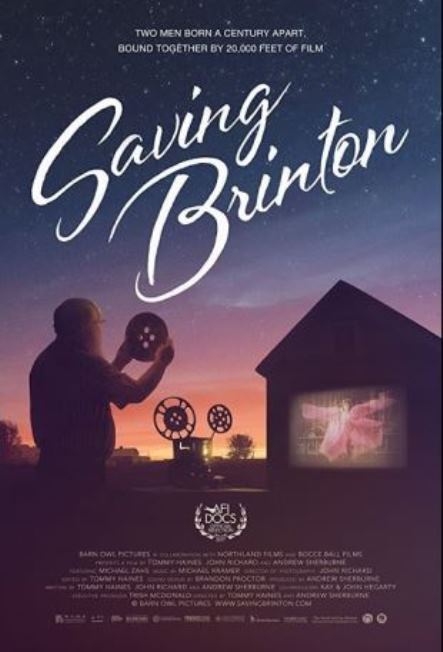 Here are some good reasons to celebrate this year’s Art House Theater Day in San Rafael.  This third annual event takes place on Sunday September 23, 2018, so there are no school night problems.  Celebrating this day at San Rafael’s Christopher B. Smith Rafael Film Center gives back to one of the venues regularly hosting the Mill Valley Film Festival.  Finally, “Saving Brinton,” the film being screened at the Smith Rafael for this event, entertainingly embodies the themes of this national celebration of art house theaters.

Rather than go for something new, the Smith Rafael has chosen something old, a film previously screened as part of their recent DocLands film series.  “Saving Brinton,” a charming documentary directed by Tommy Haines and Andrew Sherburne tells how an eccentric Iowa collector unearthed some presumed lost cinematic treasures.

The collector in question (and the film’s principal subject) is Michael Zahs.  This affable Iowa man seems to be a magnet for attracting supposedly worthless things.  Beloved pet Tuesday Dog was originally a stray dog who came onto Zahs’ property on a Tuesday.   The very plant rendered by painter Grant Wood in one of his works has been nurtured and kept alive to the present day.

It would be the contents of a cleared basement that became the most priceless of all Zahs’ finds.   In 1981, the executor of the Frank and Indiana Brinton estate decided to clear out his basement. The Brinton estate effects had been stored there without being checked for anything of historical value.  Zahs himself also didn’t examine the Brinton material for years. In defense of both Zahs and the Brinton executor, their reluctance was understandable. The Brinton materials came out to between eight to ten thousand pieces.  Cataloguing and identifying those pieces required the work of far more than just one person.

Zahs’ big problem was finding other people interested in helping out with this work.  For a few decades, he came up empty. Finally, the University of Iowa Library’s Special Collections head Greg Prickman bit at Zahs’ offer.  Haines and Sherburne’s film reveals what Zahs and Prickman slowly learn about what the Brintons left behind.

Frank and Indiana Brinton ran what was known as the Brinton Entertainment Co. Of Washington, Iowa.   Between 1895 to 1908, the duo traveled from Texas to Minnesota bringing their multimedia shows to Midwestern residents.   These shows included sing-alongs, projection of magic lantern images of places many Midwestern attendees would never see in person, and  short films made via the new motion picture technology. If you lived in Indiana or Iowa during the years of the Brintons’ travels, odds were the first movies you saw were projected at a Brinton show.

The Brintons’ traveling multimedia shows weren’t all fun and wonder.  Shows in Southern towns excluded showing the magic lantern slide of General Robert E. Lee’s surrender to General Ulysses S. Grant at Appomattox.  Carrying firearms were a necessity as a show’s receipts could tempt the larcenous.

But the Brintons’ occasional hardships pale next to the film’s revelation of the discoveries Prickman and Zahs made during their inventory of the exhibitors’ effects.  There’s rare footage of President Theodore Roosevelt at a parade. Quite a few shorts are hand-tinted in color, including ones involving exploding fireworks and flower chains.  One of the more boggling discoveries is an original Pathe Brothers film catalog from that period. This discovery leads to one of “Saving Brinton”’s priceless moments, French silent film preservationist (among his other hats) Serge Bromberg’s reaction on seeing this catalog and a couple of supposedly lost films by Georges Melies.

The work of Bromberg and other film preservationists to restore the Brinton films prevent these rare images from being lost a second time.  The trouble with these films’ original nitrate film stock is that once bubbling starts showing up on the images, the film’s on a path to slow physical disintegration.  The sense of newness and magic in the Brinton film excerpts shown by Haines and Sherburne capture emotionally what the preservationists are trying to save.

It may feel dreamlike later seeing Zahs travel to the Library of Congress in Washington, D.C. and Bologna’s Il Cinema Ritrovato film festival.  But Haines and Sherburne’s film often shows that despite these dizzying journeys and his personal eccentricities (e.g. extolling cemeteries as social gathering places), Zahs still remains an utterly grounded person.  Whether he’s visiting his mother in the nursing home or converting a church steeple into a personal gazebo, the filmmakers’ subject has not changed from the person he was before Prickman showed an interest in the Brinton collection.

As the film shows, Zahs’ consistency of character includes a love for the nearby town of Washington, Iowa.  He loves enjoying the town’s 4th of July celebrations as equally as he does defending an unconventional Nativity scene in the church store.  He candidly admits that he can’t conceive of living someplace else.

“Saving Brinton”’s emotional finale is thus not vindication of Zahs via his touring with the restored Melies short “Bouquet Of Illusions.”  Finale honors belong to Zahs’ recreation of a Brinton show in Washington’s State Theater, the world’s oldest continuing operating theater. Although the film doesn’t show any magic lantern projection of a Brinton welcome message to greet attendees, the event still conveys a mix of both period magic and present day joys.

Zahs gets the last words in the film.   He simply says, “I’m a saver.” Zahs’ simple summation of who he is earns him the thanks of historians and cinephiles around the world.