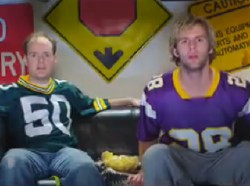 It was bad enough when CBS accepted an anti-abortion Super Bowl ad from a homophobic group, Focus on the Family, an outfit that would like nothing better than the eradication of all queers from the face of the planet, not to mention an end to any reproductive rights for women.

Now, the station has rejected a spot from a gay dating service, ManCrunch, that shows two male NFL (National Football League) fans suddenly kissing passionately while a friend looks on in surprise. The Super Bowl airs this Sunday, February 7. CBS Standards and Practices sent ManCrunch an official letter of rejection explaining that the station has “concluded that the creative is not within the Network’s Broadcast Standards for Super Bowl Sunday.”

Jarrett Barrios, president of the Gay and Lesbian Alliance Against Defamation (GLAAD), said that “this network should come clean to the public about what’s going on because this seems to be a homophobic double standard.”

A double standard about sex.

Let’s be real: The Super Bowl is as much about sexy ads as it is about two teams of men in tight pants fighting over a ball. It’s not hard to find the “10 Sexiest Super Bowl Ads” online. They include Britney Spears promoting Pepsi in an outfit that was no doubt painted on her body, Jessica Simpson causing a teenage boy to faint when she delivers a pizza in an outfit straight out of Hooters, and a Victoria’s Secret model in her nightgown twirling a football between her fingers with a come-hither-I’m-in-heat look.

In comparison, the ManCrunch ad looks like a Saturday Night Live skit. The men are not even scantily clad. It’s more humorous than anything else. It’d be different if it were singer Enrique Iglesias and actor Danny Pino (from the TV show Cold Case) going at it in their designer briefs. As it is, it’s more about the average guy.

It’s pretty hard to justify a standard that would say No to two ordinary Joe’s locking lips and exchanging saliva in the heat of a Super Bowl moment (when testosterone is at an all-time high) and Yes to Barbie dolls with big boobs selling products that have nothing to do with their anatomical parts.

CBS is obviously comfortable with ads that promote an image of women that would make Betty Friedan, author of The Feminine Mystique, roll over in her grave. Friedan’s 1963 bestseller gave birth to the “second wave” of the feminist movement in America.

CBS is also okay with political ads from homophobic and anti-choice organizations that promote those bad old family values of bashing queers and keeping women barefoot and pregnant.

T&A and conservative politics. It’s what CBS stands for.