Cavalisa Comes to the Cadillac Hotel 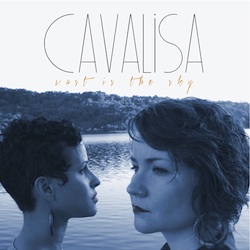 “The album features 8 re-imagined classic gems from the American Songbook including the groove-centered rendition of Minnie Riperton’s “Les Fleurs”, an original “Yesterday’s Leaves” and beloved covers by Antonio Carlos Jobim. CAVALISA’s vision infuses Jazz and Pop standards with the beauty, style, and flavor of the universal famed genre Bossa Nova. The group has been featured at San Francisco Yoshi’s as well as KPFA Radio.

Cava Menzies, daughter of renowned Jazz trumpeter Eddie Henderson, is a Bay Area native and graduate of the Berklee College of Music (BA) and the University of Miami (MM). She is a classically trained jazz pianist with over twenty years of formal study and arranging/performance experience. Lisa Forkish is an award-winning songstress/composer/arranger, originally from Eugene, OR. She is Portland’s “Songwriter of the Year” award recipient, a graduate of Berklee College of Music and released two albums as a bandleader with much acclaim.

As educators, both talented ladies are dedicated to the future generations through their faculty leadership and direction of the Vocal Department at Oakland School for the Arts (OSA). They have conducted their OSA Choir students to premier performances for President Barack Obama, CA Governor Jerry Brown’s Inauguration, Oakland Raiders, San Francisco Giants as well as three concert tours to Italy, Puerto Rico and New Orleans…”