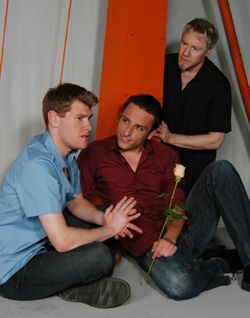 Dangerous at NCTC is Cruel, Catty and Heartless and that is why it is such a fascinating look at how people manipulate others. The characters are irresistible. Take Alexander (Donald G. Emmerich)who gets high on his selfish joy as he goes about his daily routine crossing and double crossing others – because he can do it. He not only is he content to ruin the life of a young priest, he also leaves sexual conquests everywhere. Alexander’s bed is littered with broken hearts and ex-virgins. Even when he falls in love with one of his victims, he can’t admit it, for fear that his counterpart Marcus will find him weak and not up to the task of ruining everyone in their scheming path.

Marcus is the most cunning, back stabbing bitch that you will ever meet. He’s always stirring the pot – always taunting Alexander to ruin more people. Why? Because he has a vested interest in their ruination. Marcus is after money and notoriety. Nothing will prevent him from getting it – even if it means the cruel ruination of Alexander.

The story has been told many times. It was told in the Oscar-winning film “Dangerous Liaisons” and the modernized “Cruel intentions.” It was a Broadway play (that never played San Francisco) and was usually done about the time period of the 1780’s. This new “Gay” look of the story is done in modern dress and is set in San Francisco. The clothing is very trendy (especially the duds worn by Marcus), who changes about every five minutes. The story is both dramatic and comedic as it wends its clever way thru a complex relationship between Alexander and Marcus. They once had a fling in the hay, so to speak. Alexander makes a deal with Marcus. He will ruin the reputation of certain people that Marcus wants ruined sexually if he can sleep with Marcus one more time. Talk about a weird and twisted relationship.

The original novel was written by Chodertos de Lacios. It must have set Europe into a tizzy. The delicious concept and the writing are so fresh it is endlessly fascinating. The story fits perfectly in any time frame. Of course what makes all of this work is the wonderfully appealing performances. The acting is flawless and the tension is unbearable. The broken hearts are really on that stage for all to view. This adaptation by Tom Smith is more than excellent. It is Brilliant. The direction by Clay David flows smoothly. I especially liked the blackouts between scenes with the wonderful classical music breaks. Even though Alexander and Marcus are cads and hateful at times, they are also sympathetic at other times. It is this mixture of emotions that pushes and pulls the audience through this sexually charged drama. It certainly is a “dangerous” combination. But, it is one that is like a magnet. You find yourself on that bed. Believe me!

Also in the cast is Richard Ryan (Rosemonde) – a friend of Marcus’ who discovers that he is being used. He is essential to the story and he is a delight. Trevor (Mike Fallon) is the fallen priest, who is ruined by Alexander. You’ll need Kleenex for his emotional performance. Other gems in this great cast are David Kirkpatrick, Nate Levine and Joseph Rende.

We are all callous. This play just shows us how much!

RATING: FOUR GLASSES OF CHAMPAGNE!!!! “Dangerous” is a recipient of the “Lee Hartgrave “Fame Award” for best Drama.

According to recent polls Gossip is good for you. Tidbits are in. So here is your daily dose. It’s easier on you than Steroids.


WITCHES LEAVE ORPHEUM THEATER FOR A ONE NITE ONLY OUTING. YOU CAN GET UP CLOSE AND PERSONAL WITH THE FABULOUS CAST OF “WICKED” (The sold out musical) AT THE MARINES MEMORIAL THEATER ON MONDAY EVE., AT 7:30 PM AT THE MARINES MEMORIAL. THE CAST WILL PERFORM FOR YOU ON THE STAGE AND THERE IS A PARTY FOLLOWING. ALSO, THE ‘CROWNS’ CAST WILL DO A SPECIAL PERFORMANCE. I KNOW THAT YOU WILL GET EXCITED – BUT FORMING A GONGO LINE WHILE YOU ARE ON YOUR BROOMS IS NOT ALLOWED. UNLESS, OF COURSE YOU BRING YOUR CERTIFICATE OF ‘WITCH HOOD’ SIGNED BY GAVIN NEWSOM. THIS WONDERFUL INTIMATE EVENING OF SONG, DANCE AND COMEDY IS A BENEFIT FOR THE RICHOND/ERMET AIDS FOUNDATIONS AND BROADWAY CARES/EQUITY FIGHTS AIDS. TIX CAN BE ORDERED BY CALLING THE REAF TICKET & INFO LINE AT 415-273-1620. A LIMITED NUMBER OF TIX ARE ALSO AVAILABLE FOR THE POST-PERMANCE CAST PARTY AT LE COLONIAL RESTARUANT FOR AN ADDITIONAL 25$ PER/PERSON WHICH INCLUDES HORS D’OEVRES, DESSERTS AND WINE. ALSO, HERE IS MORE FUN AND A WAY TO SAVE MONEY. ORDER TICKETS TO THE SPECIAL ‘ONE NIGHT ONLY’ WITH THE CAST OF ‘WICKED’ AND THE UPCOMING ‘ONE NIGHT ONLY’ WITH THE CAST OF ‘ANNIE’ ON SEPT 19 AT THE LORRAINE HANSBERRY THEATRE AND GET 20% OFF YOUR TOTAL TICKET ORDER WHEN YOU ORDER BOTH SHOWS TOGETHER. DON’T PASS UP THIS DEAL – AND MEET ALL THE STARS IN TOWN. I KNOW, YOUR FRIENDS ARE STARS – BUT THESE ARE STAGE STARS.

Love the title.Jesus in Montana. That’s the name of a one-man show in Greenwich Village. Barry Smith is the storyteller – and he has some really funny premises. Smith is against organized religion – but he still believes in God. Here’s a quote from his show. “In the old days, it was easy. Someone strolls by and cures you of leprosy, he’s Jesus. Times were simpler then.” Yes, they were. Now it takes radiation.

More Jesus talk. “Jerry Springer, The Opera” has the religious crazies trying to unravel their bunched up underwear. They are upset that the musical depicts Jesus as a Talk Show guest in Hell. The relig-ites call the show “blasphemous.” And wouldn’t that make a nice song? The musical will eventually open in San Fran where it belongs.

The Irish novelist Edna O’Brien will be back in the Bay Area in Sept. for the American premiere of her play “Family Butchers” – an Irish family drama that opens Magic Theatre’s 2005-2006 season.

Ryan Seacrest of “Idol” fame has signed a long-term deal to co-host the annual New Year’s Eve bash in Times Square along with Dick Clark, who apparently has recovered from his stroke. Seacrest seems like a good choice. He certainly has no lack of enthusiasm. He will eventually take over for Dick Clark. Yep, he sure has become the real “Idol” on American Idol. And he hasn’t even made a C.D. yet.