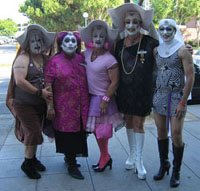 In what has to be one of the strangest acts of contrition ever, San Francisco Archbishop George Niederauer apologized for giving Holy Communion to members of the notorious Sisters of Perpetual Indulgence, a group of primarily gay male nuns who run around in very radical sister drag doing acts of charity. The head of the local archdiocese issued the apology after realizing his “mistake,” or more likely, after conservative Catholics threw a hissy fit.

The Sisters have aroused the ire of conservative Catholics before, most notably when they held their anniversary celebration on Easter Sunday, closing down Castro Street for an afternoon of good, outrageous fun. Fortunately, despite intense lobbying on the part of the Catholic Church, the festivities went on unimpeded.

Conservative Catholics are once again up in arms against the Sisters, this time because members went to Most Holy Redeemer Church in the Castro on the Sunday morning of the Castro Street Fair to partake in one of the world’s stranger religious rituals: the eating of the body of Jesus Christ (their alleged crucified savior) and the drinking of his blood in the form of a wafer of bread and a sip of grape juice (or are they still using wine?). Archbishop Niederauer, who was saying the Mass, noticed the unusually dressed persons, but gave them Communion anyway. After all, when in Rome.

I’m not a Catholic anymore, but as I recall, that’s what priests are supposed to do. Nuns and priests in the schools I attended never said, “we don’t give Communion to gay guys dressed as nuns.”

Rev. Jim Bretzke, a professor at the Jesuit-run University of San Francisco, seems to concur. He told the SF Chronicle that Communion is normally given to anyone who requests it, unless they were excommunicated.

Bill May of Catholics for the Common Good disagrees with the good University father. He said that the Sisters were there to make a political statement and embarrass the Archbishop. If that were true, wouldn’t they have called a press conference or at least tossed the wafer to the ground, as a member of ACT UP did in a protest at St. Patrick’s Cathedral in New York in the late 80s? Apparently, for some reason I don’t comprehend, the sisters may actually have taken the ritual seriously. The nuns who attended the service wouldn’t speak to the Chron.

It’s all very amusing. A Catholic Archbishop does what he’s supposed to do and then buckles under pressure from conservatives who hate homos, and especially those of us who question or mock their religion. Whatever happened to “love thy enemies” and “turn the other cheek?”

At least it’s not the bad old days when the Archbishop would have just ordered the Sisters burned at the stake.

Tommi Avicolli Mecca is thankfully an ex-Catholic, atheist writer and performer with a website, www.avicollimecca.com