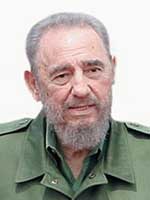 It’s hard to know what to say about Fidel Castro’s resignation after almost 50 years as president of Cuba. I have mixed feelings about the ailing revolutionary who, along with Ernesto “Che” Guevara and others, seized control of the island nation in 1959 and declared it a Socialist country.

I grew up during the Cold War. How well I remember the Bay of Pigs and the Cuban Missile Crisis. Those were scary times. Our nation always seemed poised on the brink of war. In school we went through regular air raid drills during which we were taught to duck under our desks, as if that would protect us from nuclear bombs. It got so overwhelming that I tensed up every time an airplane flew overhead.

According to the nuns and priests, Castro was the devil incarnate. Socialism was evil. God didn’t like it at all. He was going to destroy it one day when he got around to it. Then the people in Cuba and even Russia would have a “democratic” government like ours.

No one talked about Cuba before Castro. The assumption was that it had a democratic government whose citizens enjoyed all the advantages that we supposedly had here in the U.S.

Nothing could be further from the truth. Cuba was run by a U.S.-backed, right-wing dictator, Fulgencio Batista, who personally profited from the American mob-controlled gambling and drug trade that flourished in his nation. Under Batista, Cubans were largely poor, illiterate, and in ill health. Batista created a party island for the rich and powerful. That’s how it would have remained, had Castro and his compañeros not come on the scene.

Under Castro, the Cuban people gained national healthcare, something we still don’t have here in America. Their standard of living increased, though times were often rough, especially under a U.S. embargo.

When I became politically active in the late 60s, Cuba was seen by the left as almost an island paradise. In the 70s, brigades of leftists went to cut sugar cane and observe the revolution firsthand. Even some of my comrades in the gay liberation movement joined the love fest.

Some queers came back disillusioned. Allen Young, an old leftist and gay liberationist who defended the Cuban revolution in the 60s, published one of the first major critiques of the island nation’s treatment of queers. The reality, he said, was that Castro’s revolution had failed Cuban queers.

Not only were queers persecuted for displays of homosexuality, but they ended up in “re-education” camps where they were forced to become “good” Socialists. Discrimination was so rampant that in 1980, many queers were among the hundreds of thousands who left the port of Mariel in Cuba to seek refuge in the U.S. In the decade that followed, Cubans with AIDS were quarantined.

Today, Cuba’s attitudes towards queers are changing. Nowhere is this more evident than in the fact that the head of the government’s National Center for Sex Education is a very hip Mariela Castro, Fidel’s niece. She’s the daughter of Raul Castro, the 81-year-old president’s brother, a likely successor to Fidel. He’s also a reputed bisexual, though that rumor has never been confirmed.

A pro-gay and pro-transgender sexologist who’s often said that “sexuality does not just have a reproductive function,” Mariela is trying her best to modernize the nation’s attitudes. She admits that her uncle has a hard time with it. At this point, he probably doesn’t have much choice but to accept it.

When all is said and done, Fidel Castro is just another flawed revolutionary.