Carly Fiorina Shuts Out the Press, But Who is the “Press”? 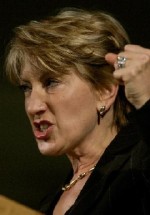 Former Hewlett Packard CEO and U.S. Senate candidate Carly Fiorina is hosting a Tea Party “Townhall” event today in Marin that sponsors say is closed to the press. According to the maringop.org website, the public is invited to the Townhall billed as “your opportunity to hear Carly speak and get your questions answered!” The noon event at the Mill Valley Community Center is sponsored by the Bay Area Patriots, San Francisco Tea Party, the Marin GOP and Novato Republican Women Federated. Fiorina Marin County chairwoman Sally Zelikovsky said that because the event is a town hall and strategic planning session with the grassroots, no press is allowed.”

Candidates have these town halls all the time and unless a candidate says something that deviates from the standard stump speech, these events don’t generate more than a few lines in the paper or a few seconds on the TV news. But the press covers these events anyway, because you never know what a candidate will say or do at a campaign stop. Telling the press they can’t attend a campaign event open to the general public is like dropping chum off the Golden Gate … you’re bound to attract sharks looking for blood.

Unless the sponsors of today’s event have pictures of Northern California political reporters posted at the door, how will they screen out reporters from the general public? And there is a question of who is a reporter in the 21st century. Long gone are the days when only a handful of folks from newspapers, radio and TV stations identified themselves as political reporters. Digital technology has created a new class of reporter known as “citizen reporter” who are usually unpaid and have no official education or training as journalists but often provide more in-depth coverage of political issues than full time, credentialed professional journalists.

In the Bay Area there are hundred of citizen reporters writing and posting photos and videos on sites like BeyondChron, Huffington Post and YouTube. While the professional reporters are known to the political operatives who will probably be monitoring the door at Fiorina’s Marin event, they can’t know everybody — particularly the hundreds of online reporters and bloggers who are unknown to the political insiders. These citizen reporters believe that, as voters, they have just as much a right to attend political events that are “closed” to the media. The mainstream media can circumvent efforts to exclude the media from “open to the public” events by sending an intern or reporter who usually don’t cover politics to bypass campaign managers and other political gatekeepers .

Another question to be asked in the digital age is how the Fiorina people plan to keep audio and visual images of this event from being posted on the Internet? Just about every smartphone and MP3 player can record decent quality audio with a touch of a button, and most smart phones can record video as well. In addition to the obvious video cameras, video cameras are so small they can be concealed in a woman’s hair, a hat or even eyeglass frames. Unless today’s townhall organizers/Fiorina staffers confiscate every cell phone, MP3 player and video flip camera, it’s likely that someone will come out of today’s town hall with some type of video or audio of Fiorina’s Q & A with the Tea Party, despite organizers best attempts to keep images of the town hall out of the media and off the Internet.

As much as the press likes to be everywhere all the time, there are some circumstances where it’s not appropriate for the press to be and the press usually respects those restrictions. However during a campaign season, any appearance by a candidate running for statewide office that’s open to the public should be open to the press as well, particularly in the Senate race where so few debates have been scheduled and access to candidates like Fiorina is so controlled and restricted.

If Fiorina was proud of her association and outreach to the Tea Party movement, you would think she would be happy to have the media document the town hall and to have the session posted on not only the evening news, but on YouTube and but on her website and in campaign ads as well.

The Tea Party movement says it’s open and inclusive, but should the voters question why the press is banned from Fiorina’s Tea Party Townhall, and whether the press will be excluded from more Tea Party candidate events between now and election day?