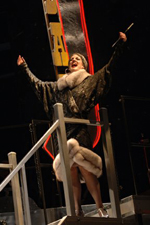 HAPPY END AT ACT IS A KNOCKOUT! It has fabulous choreography by John Carrafa and really remarkable Scenic Design by Walt Spangler and stunning Costumes by Candice Donnelly. Add to that, the seductive lighting by Robert Wierzel and SUPER SOUND design created by Jeff Curtis and you have all that you need for this production to thrill you.

Bertolt Brecht and composer Kurt Weill wrote Happy End in 1929 following the tremendous praise and response to ‘The Threepenny Opera. Happy End takes place in gangland Chicago around the time of the roaring twenties. The story is about a Salvation Army lieutenant Lillian Holiday who saves and helps the downtrodden. Along comes Bill Cracker, a gangster who belongs to a mob led by a mysterious Lady who is known as “The Fly”. Well, just like “Guys and Dolls” The Salvation Army lady and the Gangster fall in love. The similarities of the two shows is very evident to me. Of course, the music is somewhat different – but you can’t ignore the possibility that ‘Guys and Dolls’ was greatly influenced by the Brecht/Weill show. Also, you will recognize a little of “Chicago’, ‘Jesus Christ Superstar’ and ‘Cabaret’. Like I always say – there is nothing really new anymore. Everyone borrows from everyone. And then others borrow from those same borrowers. It’s an endless chain.

The music is ‘Happy End’ has been in other productions – so you will be familiar with “The Bilbao Song’, Surabaya Johnny’ and ‘The Sailors’ Tango’. They were all in the show called ‘Jenny’ at the Post Street Theater not too long ago.

To be honest – the first act went a little slow for me. But, watch out! The second and third act really come alive with some mind-blowing and breathtaking scenes. Charlotte Cohn (Hallelujah Lil). You may remember her as Musetta in Baz Luhrmann’s La Boheme. Great Singer and a stunning looking actress. Seductive is the word for “Linda Mugleston (The Fly). Draped in gorgeous costumes she sweeps every out of her way when she is on stage. Jack Willis is the most endearing character (Sam) and the funniest. He’s an actor that you need to see. The minute he comes on stage he engages you. He also comes out later in drag for a heist the gang is about to set out on. By the way if he looks familiar to you – then you saw him in the movie “The Talented Mr. Ripley.” The entire cast is superb. They just meld together so well – it’s as if they have been friends for years. It’s the best performed musical to hit San Francisco in years.

I believe that you will really relate to this fun, romantic comedy. It sure is terrific and haunting.

Eminem is to star in the big-big screen version of the early Television Western “Have Gun – Will Travel”. “Really?” – sez a Celeb. “Let me see it.”

Page Six sez that Orlando Bloom and Clair Danes were spotted dirty dancing. And why not? They were at a party…what else are you supposed to do.

A.C.T has a new trustee. And that would be Academy Award Winner Olympia Dukakis. She first performed for A.C.T in Hecuba. Not only is she an acclaimed actress – but an activist as well. Welcome!

Brad Pitt has been voted “Dad” of the year by the readers of Life & Style Mag. A Celeb wants to know. “Is it just me or is he looking more like Angelina every day?” Answer: Only when he wears a hood.

Kathleen Moss stars as Mad Margaret in the upcoming Lamplighter’s “Witch’s Curse: Gilbert & Sullivan’s Ruddygore. Look for it in San Francisco and at the Dean Lesher Theater.

Popular Jamie Torcellini will be the dairyman Tevye in Broadway By The Bay’s Fiddler on the Roof starting on July 14 at the San Mateo Performing Arts Center. Never saw a bad show there.

One of the Bay Area’s favorite actors Ray Reinhardt, will make his TheatreWorks debut in Donald Margulies’ play “Brooklyn Boy”. Official opening on July 22. at the Lucie Stern in the serene town of Palo Alto.

San Francisco Composer and lyricist, Jay Kuo has written a new romantic comedy musical. It opens on July 15 at NCTC in San Francisco. This is a world premiere.

This Monday Evening and Tuesday Evening treat yourself to the talented Barry Lloyd at the Plush Room. He never fails to entertain. And I will see you there.

Here is my favorite moment from the recently televised Tony Awards:
Actor with his Dummy from “Spam-a-lot” speaking through the Dummy sez to the co-presenter actress. The Dummy: “I’m a dummy. (Pause) and a Republican!” Actress: “Hmmmm…that rings a bell!”

What a good idea. Not, that it hasn’t been done before – but the comedy “The Marvelous Adventures of Captain Queer” gives a few new twists to the caped crusaders all over the world.

This is the story of a young nerdy teenage man (Jeff Cohlman) who endures verbal abuse by his classmates at high school. They of course know that he is gay – and like most brain dead high school students they only know how to make obscene gestures and jokes. This all happens before he becomes Captain “Q”. All the teen wants is to get through school and be left alone. The only exception is the high school stud that is a look-a-like for Tom Cruise. The Captain dreams about having his first sexual encounter with Martin Van Buren (Donovan Keith)… later, he gets his chance with Mr. McDreamy.

So, how does Captain Queer get his super human powers? Well it’s not from kryptonite. C.Q. is stung by a radioactive bee and the bee venom gives him extraordinary strength. “Holy Bug Bite” his Lesbian Sidekick sez. But, the nerd teen is uncomfortable being a caped wonder – even though it does give him a chance to get even with some of his enemies. It did have one perk however…the high school hunk is attracted to him now that he is a Gay superhero.

There is a Villain. What would a comic book hero do without them? This Villain is Reginald Screamingbottom. Yes, the name does have some meaning – and I’m sure that you can figure it out. He’s a reformed Gay, who can’t keep his hands off young boys in his laboratory where he claims that he can turn gays into straights. You could say that his bottom just screams for some attention. Dennis Parks is really quite a funny Christian Villain as he waves his electro shock device over essential man parts while having his new converts look at pictures of naked women. Does it work? Of course not!

I really did enjoy this show, even with its shortcomings. It is hilarious at times – but could have been better. The play will never make it to mainstream theater. This is strictly a Gay audience play. The jokes about Tom Cruise, Barbra Striesand and other Celebs are really out in left field. Some of the comments were so blatant that one wonders if they consulted an attorney before putting on this play. I know that Jay Leno and other comics make fun of Celebrities like Michael Jackson and others by inferring that they are gay or worse. But Cruise is known to sue at the drop of a pin.

Captain “Q” sports wonderfully appealing performances by Jeff Cohlman, Cristin Davis, Donovan Keith, Markham Miller, Dennis Parks and Heidi Wolff. Some play dual roles. Here’s one great line from the show. When the hunk strips down to his shorts – one of the Actors sez: “Thank God! Our season subscribers have been waiting all night for this. Why do you think they sit in the front row?”

Prince Gomolvilas (playwright) could make this play even more fun with some changes. And as it is written, it seems to me, to allow for that. Arturo Catricala’s direction keeps the action going with just the right pauses and glances from the actors. And yes, some of those glances will charm the “bees” right off of the trees. Here’s another bit for you… they tongued “Ben and Mary” Cocksicle’s” in the show. Outrageous? Yes…but Cartoon Idols are like that.

‘ARMY OF SHADOWS’ OPENS WITH GREAT PROMISE: The film’s opening shot of the Wehrmacht goose-stepping down the Champs-Elysees in shadows is a moment in filmmaking that both give you chills and the promise of a great story to follow.

On one level it lives up to the opening , the film quality is outstanding. They spent a pretty penny on the production. The acting is the best you are likely to see in any film but the story is where the film does not live up to its promise. Taking place in France in the mid-40’s it tells the tale of the ‘Patriots’ – (The French Resistance) during the German occupation. The characters are based on real people during that time. However famed the Resistance was during that time – it doesn’t reflect in the film. It seems that they did more hiding out and getting caught than they did ‘resisting’. Plus, some of the escape sequences are really beyond belief. There is a constant emotional strain between the actors that of course will affect the audience. However, this emotion begins to seem draining. You begin to wonder – with the sweeping music in the background and the length of the movie – is this a remake of “Gone With The Wind?” Of course, this is only a comparison. The two films have nothing in common except time.

This Jean-Pieree Melville classic has wonderful stark lighting effects and terrific direction. We are spared the actual torture scenes of the captured. In one scene they will show someone sitting in front of a desk being asked questions with his hands cuffed behind him. The film moves on to another location and then returns and we see the blood and bruises on the face. The director has spared us the agony of actually seeing the attack. That, as far as I’m concerned is a great way to convey the shock without really seeing it happen.

The film is loaded with top-notch actors. On the top of the list is the wonderful Simone Signoret ( Mathilde), a patriot. Remember the song from “Sunset Boulevard” – “With One Look?” Well, that is Simone Signoret. She hardly has to move – just look at you…and you see the whole story in her eyes. Here, the have one of the greatest actors of all time, and she has barely more than a cameo. This was a fatal mistake. Her presence on the screen was like a magnet – you never wanted her to leave.

As a curiosity…you may want to see “Army”. The film is fabulous to look at. But what disappoints is that it could have been so much better. I know that Melville liked understatement – but if he had just given us a little more reason to feel some empathy for the people up there on the screen, it would have helped. Seeing them darting in and out of the shadows was just not enough. You can Judge for yourself at the Balboa Theater in San Francisco, The Shattuck in Berkeley and the Rafael Film Center in San Rafael…all on June 23.