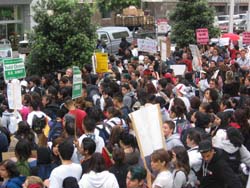 Friday night: The rain pelted the almost-empty streets of San Francisco in torrents. Outside the federal building some twenty people huddled in a circle beneath umbrellas and a makeshift tent created by a tarp and some poles.

Canto, no llores, the crowd sang quietly, steadily. Underneath orange-glowing streetlights, one acoustic guitarist plays while the steady pounding of rain on plastic accompanies the chorus. The song ends, and one woman rises from her plastic seat abruptly. She shouts a song request, and as the rest of the crowd begins to sing the woman pulls one spectator out of her seat, and the two begin to dance. Soon, the cheers and handclaps emanating from underneath the tarp rival the crescendo of the intensifying rain, punctuated by the occasional splash of the automobiles driving by on the slick, empty streets. As the two women dance, others share umbrellas and blankets, blinking raindrops from their eyes and singing softly. A row of teenagers lean against a concrete wall, their faces etched dramatically by shadows cast by floodlights that line the sidewalk.

Behind them the San Francisco Federal Building, now dark, looms ominously beyond the “tent city” comprised of fifteen small nylon domes that flank the large tarp makeshift living room. The tents are lined up single-file alongside the street, cordoned off from the street with wispy plastic tape. One police squad car is parked conspicuously nearby with its headlights on. Its presence, along with the now-silent federal building, are potent reminders of the purpose for this drenched but high-spirited assembly.

Since Tuesday March 21, between twenty and fifty people at a time have been participating in a hunger strike and occupation directly outside the Federal Building. The hunger strike to oppose HR 4437, also known as the Sensenbrenner bill, was called by the Bay Area Immigrant Rights Coalition and Deporte de la Migra and kicked off with a spirited rally led by Dolores Huerta, co-founder and secretary-treasurer of the United Farm Workers. The final day of the seven-day hunger strike was scheduled to coincide with the arrival of thousands of immigrant military resisters who oppose the war in Iraq. They left from Tijuana and marched 271-miles to San Francisco.

HR 4437 was proposed by Senator Spector (R-PA) and Representative Sensenbrenner (R-WI). It passed by the Senate on March 27th. The bill criminalizes all undocumented persons in the US, citing “Unlawful presence” as an aggravated felony. Opponents of the bill say that it would create formidable challenges for potential and existing immigrants. It would also force labor organizers, educators, lawyers and community service providers to report their clients, workers, families, and friends to INS officials.

During this week of actions against HR4437, we have seen the largest demonstrations for immigrant justice in the history of this country. According to some hunger strikers and their supporters, the strike and encampment is one way that those who are impacted are taking direct action against what many claim is racist legislation and scapegoating of especially working class immigrants of color. “We fast in solidarity with those who hunger for justice and an end to imperialism and war all across the world,” one striker declared.

Several strikers explain that their presence outside the federal building is a grim reminder that millions of people go hungry every day due to US policies that drive global neo-liberalism. “We have the privilege to choose not to eat, unlike our brothers and sisters who die at the Mexico/US border every day,” Cesar Cruz, one hunger striker, shakes his head, noting the contradiction. Since 1994, with the further militarization of the Mexico-US border under the bill Operation Gatekeeper, on average one person dies every day while trying to cross the border.

“My mom said that when she came over here she didn’t eat for three days in the desert and she had to walk, without water,” Jackie Mendez, a young woman whose family fled from civil war in El Salvador during the 1980s, recounts. “If she could do that then I can go without food for seven days.”

From Non-Compliance to Active Resistance Professionals, students, and city officials are now among the ranks of those who are forced to organize non-compliant civil disobedience in order to fight the passing of HR4437. One teacher from East Oakland explains that he is on strike because “this bill says that my students are criminals. My students are young leaders and organizers, not criminals!”

According to Wayne Wang, another striker, “We are a symbol to the movement to unify with one another.” Earlier in the week Asian immigrant janitors with the Service Employees International Union moved their dispatch hiring hall to the hunger strike site in order to demonstrate their solidarity.

In 1989, in response to increasing amounts of federal policies that scapegoat immigrants, San Francisco officials, with prodding from their constituencies, declared itself a “sanctuary city”*meaning that in theory, laws would shield immigrants from having to corroborate with federal immigration investigations.

Striker Patricia Nunoz explains, “I’ve been seeing folks with armbands saying ‘no INS snitching, no INS snitches.’ A sanctuary movement on a grassroots level is possible and should be the next step.”

Another student striker put it, “by using civil disobedience, we refuse to internalize xenophobic attacks. We make choices to either follow laws or to rebel against them.” Many students have made their choice, as is evinced by the presence of several hunger strikers from San Francisco State University. Meanwhile in Los Angeles County, over 25,000 students from have walked out of schools in opposition to the bill.

Ultimately the strength of sanctuary laws is dependent on grassroots enforcement and consistent organizing. Cynthia, a striker who organizes with MEChA, exhorts: “Every day police walk around the Mission profiling and harassing fruit vendors. If we, as a grassroots movement, were to really uphold the sanctuary laws then the police would not be allowed to do this.”

The Economics of Hypocrisy Salvador Cordon is a San Francisco resident and a psychologist who was forced to leave his home country, El Salvador, after getting shot during the war. Tonight he is acting as “security” for the encampment.

Cordon mulls: “What we’ve seen this past week is incredible. Although fighting for rights is new among the most recent immigrants, historically immigrants have always been a major part of social movements in the US: farmworkers, hotel and restaurant workers*immigrants have played a significant role in labor movements here and have always fought for their own rights.”

Cordon and others point to US military interventions and US-sponsored economic reforms as major causes of forced migration from rural areas and “global South” countries to economic centers in urban areas and the “global North.”

“During the civil war in the 1980s the US was providing over a million dollars a day in military aid to the Salvadoran government who was killing the people. Hundreds of thousands of El Salvadorans came here in the 1980s fleeing the civil war that was supported by the US. Since then the US has been a main advocate for neoliberal reform, which has killed agriculture in our country*the main means of life for the peasantry. Now we have the maquilas, so there isn’t a need for a high level of education in the workforce, and people don’t own or work their land. People don’t have good salaries. It’s all part of the plan for ‘economic reform’ that was imposed on El Salvador by the US. Nowadays the main export from El Salvador is people. Many of us have come the US. We became part of the social movements here.”

The Mendez sisters are also quick to point out that while US foreign policies drive people out of their home countries, US domestic laws deny basic labor and human rights to undocumented immigrants while US businesses simultaneously rely on them as sources of cheap labor.

“My auntie came here in the early 1980s when the war started in my country, El Salvador. They were running from the destruction that the war caused. There were no jobs,” Rebecca Mendez explains matter-of-factly.

Striker Maria Marroquin, an organizer with the Mountain View Day Laborer Center, breaks it down: “The reason people are migrating here is because of globalization. We need to come together as a global movement to respond to this.”

Underneath the tarp, the music has stopped, and people are packing up for the night and ducking into their tents. Only a small circle of people remain, quietly talking.

“I want my people to be free. This is a land of immigrants; everyone here is an immigrant unless you’re an indigenous person,” Jose, a strike supporter and student at East Oakland Community High School, states simply, staring off into the rain.

“People of color are becoming a majority in certain areas of the US,” Enrique Morales, Mission district resident and supporter, declares. “We’re getting educated, and that is a threat to the government and system that is racist. It threatens them that we might take over institutions or build our own. This bill is trying to keep us down.”

Morales’ family also immigrated to San Francisco from El Salvador and struggled for years to get documentation. “Immigration is a global issue. We should recognize that putting borders up on the planet Earth isn’t going to change the fact that people are going to keep migrating. This country has a history of immigration that goes back to the days of indigenous tribes. That’s not going to stop. The reality is we are the economy. We create jobs, and we provide labor. It’s very hypocritical that the very people who benefit most from our labor are the ones who want to pass laws like this one.”

Morales looks up, surprised. “We’re going to keep doing what we’ve always done for the past 500 years and before that*we’re going to keep on surviving and moving! We’ve got to understand: they can put up as many fences as they want, but it doesn’t matter, somebody’s going to dig a hole. As long as people are hungry and need to get here, they’re going to get here. It’s unstoppable. We’re fighting for power, and we’re going to continue to fight.”