Can We End the Tenderloin As A Containment Zone? 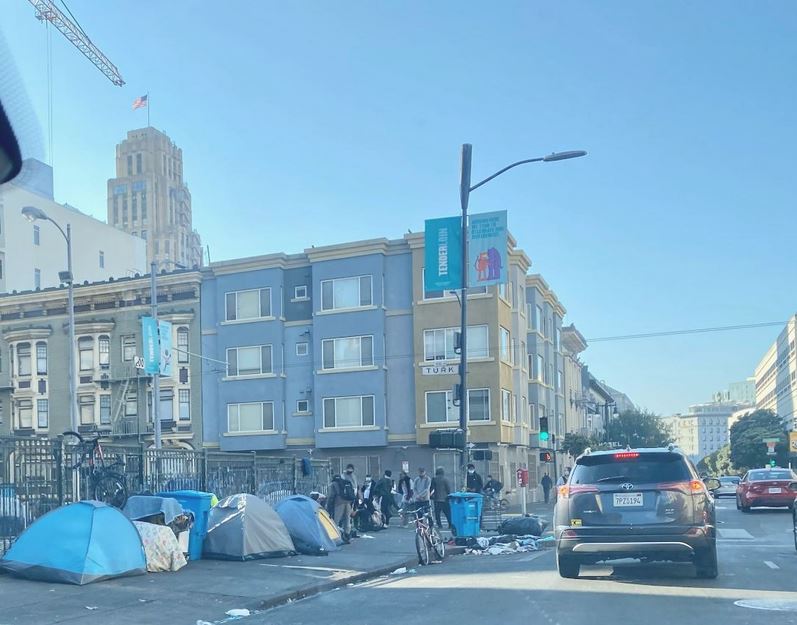 A Unified City Strategy is Needed

The Mayor had previously backed up her concerns by allocating $5 million in city funds for Urban Alchemy to reduce drug dealing in the Tenderloin and Mid-Market. This program is already making a difference, and will expand as staff is hired and trained.

I encouraged the mayor to get the city to comply with the injunction obtained by the Tenderloin stakeholder lawsuit requiring the removal of tents from Tenderloin sidewalks. These tents are drug dealing safe havens that promote addiction, violence and overdoses; ending the Tenderloin as a containment zone necessitates their removal.

Some may ask: Doesn’t the mayor have the power to end the Tenderloin as a containment zone for drug dealers?

Unfortunately, as much as people like to think that a specific elected official can solve all problems, Mayor Breed, like prior mayors, can only do so much on their own. Ending the Tenderloin’s role as a  containment zone requires a unified strategy and commitment from the city’s  entire political leadership.

How the Tenderloin Became a Containment Zone

By the 1970’s the Tenderloin had fallen so far that City Hall did not even view it as a neighborhood. But after Southeast Asian refugee families started arriving in the Tenderloin in the late 1970s’ and community organizers began mobilizing residents,  the Tenderloin firmly re-established itself as a residential neighborhood. A series of big political victories in the early 1980’s led to activists pushing to end the city’s “containment zone” strategy.

What Props It Up?

I led a March Against Crime through the streets of the Tenderloin with Mayor Feinstein and other city leaders in 1985. Yet the Tenderloin remains a containment zone.

What props it up? After all, similar areas in other cities involve local residents as the dealers. That’s not the case in the Tenderloin. Its dealers primarily live in Oakland. They only come to the neighborhood to sell drugs. A steady stream of cars bring outsiders to the Tenderloin to buy drugs from these Oakland dealers. Buyers and sellers use the Tenderloin as an open drug supermarket.

So who keeps the Tenderloin a containment zone?

District Attorney Chesa Boudin and uncaring judges both play a part. District elections enabled ten of eleven supervisors to avoid responsibility for Tenderloin drug dealing, leaving it entirely up to the D6 Supervisor (Matt Haney has done whatever he can to stop Tenderloin drug dealing, including creating a high profile drug task force to address the crisis. Those claiming Haney has not prioritized action to end drug dealing are wrong).

San Francisco identifies as a progressive city. A city that strives for equity. Our city takes pride in these values yet looks the other way while allowing the ethnically-diverse, working-class, kid-filled Tenderloin to become free office space for East Bay drug dealers.

I see a contradiction here. I fought to stop Tenderloin gentrification so that its low-income residents could continue living in an increasingly expensive city. What San Francisco value says that this victory came at the price of forcing residents to live in an open drug supermarket?

Neither District Attorney Boudin nor local judges allow open drug supermarkets to operate in other neighborhoods. But they and other city officials accept this in the Tenderloin.

The SFPD believes that open drug dealing “is how the Tenderloin has always been and there’s no way we can change it.”

You won’t hear top SFPD brass say that in community meetings, though former Chief Greg Suhr often did. Current Chief Scott was not trained with such views but virtually the entire SFPD command structure was part of Suhr’s team and never publicly challenged his Tenderloin policies.

Chief Suhr’s 2015 redistricting plan removed police from the Tenderloin just as the neighborhood was making great progress. Suhr shifted the crime heavy parts of Southern Station to a massively expanded new Tenderloin Station. What we see at Turk and Hyde in 2021 is part of Suhr’s legacy. (See “SFPD Redistricting Plan Fails the Tenderloin, “December 15, 2014)

Has Chief Scott publicly acknowledged the SFPD’s inability to root out Tenderloin drug dealing? I don’t recall daily media even challenging the chief on this critical policy issue.

Yet everyone reading this knows that if we saw a Turk and Hyde drug scene in the Richmond, Sunset, Pacific Heights and most city neighborhoods for a single day the media and all supervisors would be all over Chief Scott demanding answers. And increased police staffing to remove the dealers for good.

The SFPD has never announced a clear, sustained strategy to end the Tenderloin as a drug dealing containment zone. They make believe they can’t solve the problem. Officers may clear out a block for a few days or a week, but there has never been a sustained plan.

Implementing such a plan—rather than mere temporary, band aid actions—is how we end the Tenderloin as a containment zone.

The Chief says he’s doing the best job he can with the resources—but the SFPD never tells Marina residents it doesn’t have the resources to reduce car break ins. Those crimes get a quick commitment for additional police resources. No SFPD chief is going to anger Marina residents by suggesting the neighborhood remain a car break-in containment zone.

This unequal police treatment based on the income levels of neighborhoods is not what San Francisco says it is about. Which is why we need all city officials to demand fairness for the Tenderloin.

We can end open drug supermarkets in the Tenderloin. All it takes is the political will.