Can Traditional Journalism Be Saved? 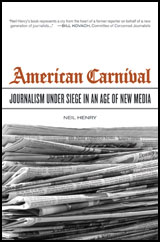 In the wake of Bill Moyers’ PBS expose on the mainstream media’s selling of the war in Iraq, this is a difficult time to come out with a book touting journalism’s high ideals. But Neil Henry, a former Washington Post reporter who now teaches at the UC Berkeley School of Journalism, makes a valiant case for the importance of traditional journalism while not flinching from its abuses. In fact, what makes American Carnival such an enjoyable read is Henry’s tales of journalistic wrongdoing, and his providing specific facts about corporate and political pressure shaping the news. American Carnival may not convince young readers that they should attend journalism school, but, as Henry’s subtitle suggests, it does explain why journalism is currently “under siege” and why excessive reliance on the Internet and other “new media” has its pitfalls.

Many readers of Neil Henry’s American Carnival may start the book already skeptical of the mainstream media. After reading Henry’s account, it appears that the media’s failure to provide fair and balanced reporting is even worse than suspected, and Henry provides the names, media outlets, and facts behind the media’s malfeasance.

What distinguishes this book from many others is that Henry, like media critic Ben Bagdikian, speaks from a position of having worked in the belly of the beast, as a reporter from the Washington Post. Henry describes his own methods of gathering information for stories that were consistent with the highest ideals of journalism, but such reporting practices are now imperiled by cost-cutting and political agendas at most of the nation’s newspapers.

Henry makes no effort to argue that there was a “Golden Age” of journalism where money and political bias did not impact news coverage. In fact, he shows enough examples of historical journalism malfeasance as to make the case that the current problems facing newspapers and television news are nothing new.

Henry notes the downsizing of newspapers and the corresponding morale problems, a trend highlighted last week by a public protest by staff of the Minneapolis Star-Tribune against cutbacks proposed by the paper’s new owner. Newpapers are increasingly controlled by the bottom line, not on the basis of what the public needs to know.

But as Henry shows, the trends in television news are even worse. He describes how the content of television news has changed, as celebrities, weather, and crime now dominate even national news shows. He has a very perceptive discussion of how local news shows increasingly rely on video-news produced by public relations firms; as the number of hours devoted to news increases, while staff is cut, local news producers have solved this seeming contradiction by relying on pre-packaged “video news releases (VNR’s)” funded by private interests.

What most concerns Henry is the way in which FOX News has transformed the entire nature of television journalism. Instead of hiring people to “report” on events, FOX—separate and apart from its right-wing bias—creates “news” shows that simply provide a soapbox for non-journalists like Bill O’Reilly to spout opinions.

FOX is only the most glaring example of how national television news shows save money by bringing on guests to give opinions rather than spending money on reporters to gather news. Studies have found that the more people watch FOX News the less informed they are, and this same conclusion could likely also be reached for those who primarily rely on television news for information.

Many critics of mainstream news coverage believe the Internet has dramatically expanded access to the truth (Disclosure: as the editor of BeyondChron.org, I clearly support this view). But while Henry acknowledges the need for journalists to be tech-savvy, and appreciates the convenience of e-mailing stories to editors, particularly from abroad, he is overly skeptical of the Internet’s journalistic benefits.

Like other traditional journalists, Henry raises concern about the rise of “citizen-journalists,” whose writings are not governed by professional standards and who lack the resources to do the time-consuming fact-gathering that he sees as essential for a democratic society.

But as Bill Moyers showed, it was not the Internet or “bloggers” who ignored facts in selling the Iraq war to the American public, it was the New York Times, Washington Post, and nearly the entire White House press corp (Knight-Ridder’s correspondents were the chief exception).

Henry does not fully appreciate how the emergence of the Internet as a primary source for millions of Americans, particularly young people, has created a long-overdue counter-point to the right-wing media machine. It was the Internet that exposed and kept alive such incidents as former Virginia Senator George Allen’s use of the derogatory term “macaca,” virtually forcing the Post and other media to finally cover the issue.

The spreading of lies and myths through the Internet does not mean such falsehoods impact the nation’s political system. But because newspapers and television news shows convey the appearance of being trustworthy, their dispensing of false or misleading information —such as the presence of WMD’s in Iraq despite any evidence—actually kills people.

One must admire Henry for holding out a vision of journalism that, if practiced, would greatly enhance our nation. But if his goal was to encourage young people to enter journalism school, the book could well have the opposite effect.

Henry’s commitment to honest journalism resulted in American Carnival being one of the most persuasive briefs for the failure of mainstream journalism that I have read. In fact, it should be recommended reading for those seeking to defend Internet news from traditional media attacks.