Can The Military Be Reformed? 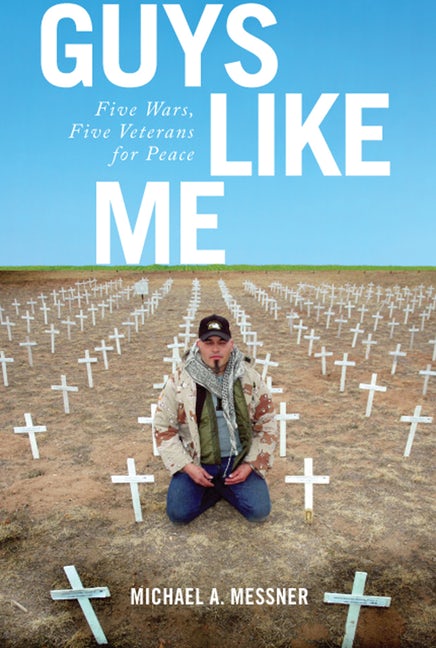 It happens all the time in small towns and big cities across the country. A young person from a poor or working-class family can’t find a good job or afford to pay for higher education. Other family members, a teacher, coach or guidance counselor–who have been in the armed forces themselves– encourage them to enlist. Military service promises an escape from the dead-ends and disappointments of civilian life. It offers steady employment with benefits, now and later.  By signing up, you can learn a skill, see the world. Overcome challenges. Make yourself into a leader. Become an army of one.

Unfortunately, going to war—or even just training for it—can be a life-changing experience in ways never mentioned by military recruiters with a quota to fill. Former Marine Captain Anuradha Bhagwati, the author of Unbecoming: A Memoir of Disobedience (Simon & Schuster) and the multi-generational cohort in Michael Messner’s Guys Like Me: Five Wars, Five Veterans for Peace, (Rutgers University Press) all left active duty deeply scarred. Their service related conditions, emotional and physical, landed them in Veterans Health Administration (VA) treatment programs, based on varying degrees of disability. Their troubled feelings of anger, betrayal, sadness, or remorse often laid waste to their personal lives. But their common experience in uniform also transformed them into public advocates for peace or gender equality.

In Messner’s book, we first meet World War II veteran Ernie Sanchez who survived, as a 19-year old, heavy German shelling in the Hurtgen Forest. For the rest of his life, Sanchez carried “a jagged scrap of shrapnel lodged near his spine.” But, far more grievously, he also suffered from PTSD, long untreated, and “the moral burden of having mowed down, with his Browning Automatic Rifle, between fifty and a hundred German soldiers.”

Just a few years after Sanchez (who is now deceased) mustered out, Wilson (“Woody”) Powell joined “the three-year armed conflict in Korea that was an initial flash point of the Cold War between the U.S. and the Soviet Union.”

There, his complicity with “acts of cruelty and atrocities committed against Korean civilians” left him guilt-stricken as well. His response, later in life, has been to make amends wherever he can, by “letting people know that wars have very personal, very harmful consequences.”

After winning medals for his war-time duty in the Navy in the late 1960s, Gregory Ross “fell into a depressive and sometimes suicidal state.” To this day, he suffers from partial hearing loss due to “the clamor and thunder” of the “7th Fleet gun line, a floating artillery unit, that hammered the coast of Vietnam.” His personal healing process led to a twenty-year career as an acupuncturist in a Bay Area public hospital– a way of “paying off karmic debt for my part in the war, for the people I killed.”

Like Powell and Ross, Army lieutenant David Craig followed in the patriotic footsteps of a father who served before him. “For lack of common sense, I liked the military,” he confesses to Messner. “I liked the structure. I was a little kid playing war: I’m twenty-one, twenty-two but without an adult brain.

During his deployment in Operation Desert Storm (aka the First Gulf War), Craig ended up “inhaling the smoky air from burning oil wells, ingesting the PB pills that troops were given to protect against expected nerve gas attacks, being exposed to depleted uranium found in tank rounds, and being in proximity to stockpiled Iraqi chemical weapons that U.S. military engineers had destroyed in place.” The experience wasn’t healthy for his body or brain. By age 52, Craig is practicing yoga, leading a Veterans for Peace chapter, and sporting a T-short with the provocative message: “Military Recruiters Lie.”

Jonathan Hutto, an African-American former student body president at Howard University, faced a “toxic workplace environment” below deck during Operation Iraqi Freedom (aka the Second Gulf War). “Women and men were groped in what they call in the Navy ‘grab ass,’” he recalls. Black sailors were subjected to derogatory remarks about Rev. Martin Luther King, praise for Adolph Hitler, and, in Hutto’s case, the experience of having a hangman’s noose dangled in front of him by three white Navy men, all of higher rank.

After enlisting in the Marines, Anuradha Bhagwati discovered that being a highly-educated bi-sexual, immigrant woman of color made life difficult, on the job and off.  “The Corps” is a branch of the military only 8 percent female and a known breeding ground for military sexual trauma (MST). As such, it was a very bad career choice for someone previously assaulted in civilian life.

Bhagwati never got a chance to test, in actual combat, the “violent edge” she developed in “a culture in which degradation and humiliation were entwined with belonging.”  She did reach the rank of captain and, like several of the “guys” in Messner’s book, earned a VA disability rating for the trauma she experienced in uniform.

Both Bhagwati and Hutto were unusual recruits because of their political leanings. A Yale University graduate and Columbia grad school drop- out, Bhagwati was, according to her memoir, “immersed in leftist politics growing up.” She protested police brutality as a teen-ager, visited the Zapatistas in Mexico before joining the Marines, and voted multiple times for Ralph Nader.

Hutto organized his college dorm mates to participate in Louis Farrakhan’s “Million Man March” in Washington, DC. A political science major and undergraduate visitor to Cuba, he arranged for one of Howard’s most distinguished alums, the civil rights and Black Power movement leader formerly known as Stokely Carmichael, to address the student body. Seeing Kwame Ture speak and meeting him personally, nine months before his death, changed the trajectory of Hutto’s life, but not on a straight line for sure.

Hutto went from Howard to public school teaching, fathering a child and struggling to pay off $65,000 worth of student loans. When a Navy recruiter promised that enlistment would make him debt-free, Hutto “started listening” despite his awareness that the U.S. was already engaged in disastrous open-ended wars in the Middle East. While serving in the Navy in 2006, he helped initiate “An Appeal for Redress,” signed by more than 2,000 active duty personnel who favored “prompt withdrawal of all American military forces and bases in Iraq.”

Bhagwati had more complicated reasons for enlisting. She was escaping abusive parenting by two Ivy League professors of economics, who subjected her to cruel belittling and relentless pressure for academic success. Their privileged daughter’s reaction formation was shaped in part by watching G.I. Jane, a 1997 Hollywood action film. It features a buff and buzz-cut Demi Moore, who “pushed feminist boundaries” in her quest to join an elite Navy Seal-type unit. The author “was riveted” by the movie.

Real life in the Marines exposed Bhagwati to “fierce misogyny and sexual harassment,” which inspired her to create the Service Women’s Action Network (SWAN) after she was discharged. At SWAN, Bhagwati became, according to her publisher, a “radical activist effecting historic policy reform.” It would be more accurate to say she was Sheryl Sandberg in camo– an “equal opportunity feminist,” demanding fair treatment and more leadership opportunities for women in the military, neither of which alters anything problematic about its fundamental mission.

With funding from corporate law firms and foundations, SWAN won much needed improvements in the federal government’s treatment of current and former military personnel suffering from MST.  But Bhagwati’s book includes far more criticism of the under-funded VA than our $700 billion a year Department of Defense.  Under Presidents Bush, Obama, and now Trump, the DOD is, after all, responsible for the open-ended warfare that has flooded the VA with hundreds of thousands of new patients suffering from PTSD, MST, traumatic brain injuries, lost limbs and the effects of burn-pit exposure.

No Soldier Left Behind?

To deal with this burden of care, Trump wants to privatize VA services, rather than strengthen or expand public provision.  In a recent New York Times op-ed piece based on her book, Bhagwati loudly applauded this right-wing initiative  (See “Donald Trump is getting it right on Veterans Affairs” at https://www.nytimes.com/2019/02/03/opinion/trump-veterans-health-care.html)

In Unbecoming, the author also rejects the peace activism so bravely embraced by four of Messner’s five male interview subjects. “I avoided antiwar partnerships,” Bhagwati explains, because “activists in a post-9/11 world” often approached SWAN “with mixed agendas that started with opposition to the wars in Iraq and Afghanistan.” According to the author, “imposing an antimilitary ideology” or “writing off the military in broad brushstrokes” wasn’t going “to win over mainstream flag-waving Americans, whom we needed on our side in order to reduce sexual violence in the ranks.”

As Messner, a sociology professor at the University of Southern California, documents in Guys Like Me, a broader social justice and peace movement approach is much preferable to Bhagwati’s narrow focus on “military culture” reform. Like Bhagwati, the veterans in his book have combined activism “with deeply personal efforts to heal their own emotional wounds, sustain sobriety, and help other veterans” who suffer from interpersonal violence, poverty, or homelessness.

Yet, they manage to do that while also opposing U.S. military intervention “as an act of moral necessity and patriotism.” And their national organization, Veterans for Peace, strongly opposes Trump’s undermining of veterans’ hospitals and clinics because it threatens nine million patients and the 100,000 veterans who are part of the workforce caring for them. Privatization will have its greatest impact on former military personnel who are poor, working class, and non-white (most of whom never served as an officer, like Bhagwati did).

Consistent with her own former rank and neo-liberal politics, the author of Unbecoming thinks that this VA out-sourcing is just fine. For-profit medicine will produce more “positive outcomes” for veterans, particularly women, than a system favored by all major veterans’ organizations (other than the Koch Brothers-financed Concerned Veterans of America). Leaving no soldier behind was part of Bhagwati’s military training, now apparently forgotten. The market solutions to veterans’ health care that she champions will leave many of her former comrades very far behind, even those she professes to care the most about.

(Steve Early is the author, most recently, of Refinery Town: Big Oil, Big Money, and the Remaking of an American City. He is a collaborating on a book about veterans’ affairs and can be reached at Lsupport@aol.com.)