Can the Democrats Win Without the South? 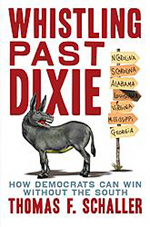 In 1996, when I was eighteen years old, I read a book that had a formative influence on how I view American politics. Written by a college professor in Mississippi, it explained that Democrats are economic populists and cultural elitists, whereas Republicans are cultural populists and economic elitists. The Democrats can win back the South, he argued, if they emphasized their economic populist credentials – because then poor whites who disagree with the party on “God, gays and guns” would start voting their economic interests. A recent issue of The Nation made the same argument, urging Democrats to “adapt the South’s economic populist tradition into a fresh, class-based politics with broad appeal to blacks and whites alike, directly challenging the politics of cultural fear and racial unity.”

Guess what? It’s not working and probably won’t work — at least not in the South. It’s infuriating that Mississippi, the poorest state in the union and the state with the highest African-American population, is also the most Republican state. But that’s because the South is a unique part of the country, where white voters are more conservative, more evangelical, more jingoistic, less unionized and more susceptible to racial appeals than other Americans.

For years, Democrats have obsessed about re-capturing the once Solid South – where they had an electoral lock for over 100 years. Now in Whistling Past Dixie: How Democrats Can Win Without the South, political scientist Tom Schaller urges the party to forget about the past and forge a “non-Southern strategy” to build political power. Focusing on the South, he argues, will not gain many votes, reeks of pandering and is simply counter-productive to a long-term progressive revival.

From the Civil War to the New Deal, Republicans dominated American politics while being completely shut out of the South. Therefore, says Schaller, it is doable for Democrats to win back the White House and keep Congress without making any gains in the South at all. Because black Southerners (and Texas Latinos) still vote Democratic in droves, Democrats can be in better shape than Republicans were 100 years ago – even without a single white Southern vote.

But isn’t it suicidal to not target a fast-growing part of the country – as Democratic strongholds in the Northeast become a smaller and smaller piece of the pie? Not necessarily. While it’s true that the South has (and will) increased its share of electoral votes and Congressional seats, virtually all of that is attributable to Florida. And Florida is the least Southern state – demographically, politically and culturally. Not coincidentally, says Schaller, it is also the only Southern state still competitive between Democrats and Republicans.

New England used to be a Republican stronghold, says Schaller, but does the Republican Party today obsess about taking it back the way that Democrats talk about re-claiming the South? Of course not. Republicans realized decades ago that times change, and the Democrats were vulnerable in the South precisely because the party was standing up for civil rights. Republicans have consistently gone after white Southern Democrats who are vulnerable in their districts, and so Democrats must turn around and return the favor.

Instead of targeting the South, Schaller urges Democrats to do the following: (1) target seats currently held by moderate Republicans in the Northeast and other Democratic strongholds because these are the easiest to pick up; (2) focus on the Midwest where many voters are culturally conservative, but will respond more favorably to an economic populist message than in the South; (3) target the Southwestern states that are experiencing massive growth due to Latino voters; and (4) go to the Rocky Mountain region where voters have a strong libertarian streak when it comes to social issues. All of these, he says, will be easier to make in-roads than in the South.

Democrats complain about how many people in the South (and elsewhere) blatantly go against their economic interests by voting Republican — because they let cultural issues distract them. But these voters, says Schaller, will not support your issue-based agenda until they’re convinced that you share their values. In the West and Midwest, many voters won’t trust you unless you support gun rights – but if you meet them on that issue they will listen to your economic agenda.

In the South, however, being good on guns isn’t enough. They also want you to be with them on abortion, the death penalty, school prayer, and gay marriage. In other words, says Schaller, picking up votes in the South by pursuing an economic populist agenda would require giving up most of what progressives stand for – and risk alienating support in other parts of the country.

Many have criticized Whistling Past Dixie because of two sweeping generalizations they make about the book. First, Schaller does not urge Democrats to “fuck the South” or that we should have “let them secede.” He simply says that the South is not a short-term priority for Democrats to build a national majority because it’s the most hostile territory. “If nostalgic Democrats must dream about Dixie,” he writes, “let them envision a future where the party is competing seriously in places like Alabama, Mississippi or South Carolina, for that will mean the only uncertainty on Election Day is whether Democrats will coast to a forty-state or forty-five-state landslide.”

Second, he does not urge Democrats to “run against the South” – but rather to run against Southern conservatives. Republicans, he says, don’t run against the Northeast – but they run against Northeastern liberals. “Whenever and wherever possible,” says Schaller, “a party must create the least favorable image in the public’s mind of who their opponents are and what they represent.” Attacking right-wingers like Trent Lott, George Bush and Tom DeLay does not meant that you’re running against the South – you’re just running against conservative politicians (who happen to be from the South.)

Whistling Past Dixie was published in October 2006, which creates an obvious problem — it does not incorporate the November election results. But it’s apparent that Democrats took back control of Congress by pursuing Schaller’s “non-Southern” Strategy. Of the 30 House seats that Democrats picked up, only five were from the South – and two of those were in Florida. A third seat was in Southwest Texas, which Democrats won because of the Latino vote. Meanwhile, Democrats picked up 11 seats in just four Northeastern states – New York, Pennsylvania, Connecticut and New Hampshire. In the Senate, Democrats picked up six seats with only one in the South (Virginia) – and it’s because so many Northerners have moved to the suburbs of Washington DC.

In fact, the most frustrating part of Whistling Past Dixie is that he goes into excruciating detail about the “upcoming” November 2006 elections – and talks about Democratic pick-up opportunities in various parts of the country (down to the individual candidates who are running.) Chapter 4 of the book reads like a long blog entry on Daily Kos, and is now obsolete. For that reason, I wouldn’t recommend readers to buy the book until it comes out on paperback – when Schaller will hopefully incorporate the recent election results and explain how it validates his thesis.

Moreover, Schaller never acknowledges the limited success that some progressive politicians in the South have had by building a multi-racial coalition on an economic populist platform. In the Sixties, Texas Senator Ralph Yarborough was a staunch supporter of civil rights, co-wrote the Endangered Species Act and opposed the Vietnam War. Later, Dale Bumpers represented Arkansas in the U.S. Senate – and when he retired in 1998 they called him the “last Southern liberal.” In the Eighties, left-winger Jim Hightower was elected Texas Agriculture Commissioner. Schaller never mentions these successes, nor what they mean about building a class-based politics in the South.

For decades, Democrats and progressives have struggled with how to win back an electoral majority without abandoning what they believe in. Whistling Past Dixie offers one of the most cogent theories I have read in a long time, and I highly recommend his provocative theory that winning back the South “can wait.” But because it was written before the last election, don’t buy a copy until it comes out on paperback.