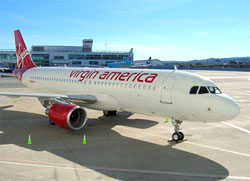 Flying to LA in a big leather seat, listening to Sun Ra and Steely Dan while sipping a nice white wine. The flight attendant addresses me by my first name. The flight’s late, so the flight attendant issues coupons for a free drink on the next flight. Flying first class on United? No, I’m in a $59 seat on Virgin America flight. If you have to fly, Virgin America, San Francisco’s hometown airline, is the way to go.

Paul Hogarth’s July 30 article on the sad state of the airline industry just hit the tip of the iceberg. Most of its problems can be blamed on unfettered deregulation that gave major carriers the green light to use mergers and takeovers to eliminate the regional carriers that aggressively competed with the major airlines. The mergers and takeovers were justified on the grounds that fewer airlines would result in better service to more places and lower fares.

During the 1970s and early 1980s four airlines, Western, PSA, Air Cal, and RenoAir were based either in California or Nevada and operated hundreds of non-stop flights between Northern and Southern California, as well as Reno and Las Vegas every day … Chicago-based United employed a quarter of its worldwide workforce in California, including thousands of workers at massive United maintenance facilities at SFO and Oakland International Airport.

All five airlines, along with other airlines with a lesser California presence such as Pan Am, TWA, American and US Airways all wanted a piece of the lucrative California market, and used all kind of marketing schemes to get passengers on their planes. Pan Am promoted roomy 747 service and triple frequent flier miles on their $25 flights between SFO and LA, Air Cal promoted its Orange County hub as the gateway to Disneyland and RenoAir hyped its links to the casinos and ski resorts.

San Diego-based PSA was the original low cost airline and engaged in an aggressive and long running fare war with much larger United. PSA drew passengers away from United with its laid back style that included smiles painted on their planes, wisecracking flight attendants in mini skirts and unusual flights like the legendary Midnight Flyer. The Midnight Flyer was a mail flight between LAX and SFO with PSA selling standby only seats as low as $10 one way.

PSA and every other California/Nevada based airline were eventually forced to merge with much larger carriers like Delta, American and US Airways on the promise to maintain service within California. USAir today has no non-stop flights within California and Delta, which inherited the vast Western Airlines network of California flights, will eliminate the handful of its remaining non-stop flights within the California in September. Delta customers who want to fly from San Francisco to Los Angeles, San Diego or Las Vegas will have to make a connection in Salt Lake City.

United and American had most of the SFO to LAX market to themselves before last August when Virgin America began service to LAX and Southwest returned to SFO after a six year absence. The added competition by low cost Virgin American and Southwest prompted United and American to reduce their average $150 one way fare from SFO to LA, but not enough to match the $39 and $59 fares routinely offered by Virgin and United.

Virgin America has survived its first year of operation by operating low cost, full service non-stop flights on nearly all of its routes. Operating non-stop flights means Virgin America passengers will not be stranded at Midwest or Southern airport hubs that have been the source of most passenger complaints with other airlines. Virgin America offers coach passengers an extensive array of free passenger amenities, including Direct TV, music from more than 3,000 MP3 tracks and plugs to power laptops, game consoles and cell phone chargers. Coach passengers can also pay to watch first run movies from the major studios and will soon be able to purchase fresh food on board.

Virgin America departs from SFO’s International Terminal, which is the last stop for BART’s Pleasanton-SFO line. Most international flights depart either in the afternoon or early evening so passengers flying on morning or early afternoon Virgin America flights can avoid the crowds at SFO’s other terminals. Virgin America celebrates its first year of operation from SFO on August 8.