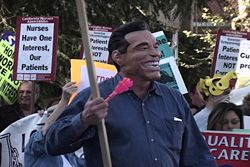 Governor Schwarzenegger’s call for a statewide special election in November could potentially reshape San Francisco’s local contests. An historically low off-year election turnout has been replaced by a contest that should bring masses of Democrats and Greens to the polls to defeat the Governor’s right-wing power grab. November would appear to be ripe for a series of local progressive initiatives, but there’s a problem: activists urging “yes” votes on local measures could be drowned out by the “Just Say No” statewide campaign that will blanket San Francisco.

One of the Governor’s initiatives— repealing the school funding guarantees of Prop 98 and giving him sole and absolute control of the state budget—would destroy the state’s already grossly under funded public education system. This measure, along with the Governor’s attempt to silence the public employee unions who have exposed his hypocrisy, guarantees a huge November turnout in San Francisco.

In fact, November could see the largest turnout in California history for an election without statewide candidates. Turnout may well exceed that of the June 2006 election, and it is unfortunate that the anti-gay marriage constitutional amendment will likely be decided then rather than this November.

Here’s the quandary San Francisco’s progressive activists face: asking voters for a “Yes” vote on local measures could be drowned out by progressives statewide multimillion dollar “Just Say No” campaign.

To improve chances of victory, progressives should ensure that their measures requiring a ‘yes’ vote are of an unrelated subject matter to the greater statewide battles. Otherwise, they stand a fare greater chance of getting defeated due to the special election.

Consider the proposed sales tax hike. Should the measure qualify for the November ballot (it needs one more Supervisor’s signature to reach the eight required), SEUI Local 790 would be waging a campaign for a tax increase at a time when statewide unions are challenging the Governor’s claim that Democrats support the repeal of Prop 13 and other tax hikes.

Can San Francisco voters differentiate between the anti-Schwarxenegger message on taxes and the push for a local sales tax? Absolutely. But with so many voters casting a resounding “No” against the Governor, obtaining a majority “yes” vote on the sales tax hike becomes more difficult.

Unfortunately, the uniqueness of the November special election means that the relationship between state and local initiative voting patterns in past elections offers little guidance. But local initiatives that are clearly distinct from the statewide measures would appear to have the best chance of not being impacted by San Francisco’s likely 80% “no” vote on the Governor’s agenda.

For example, Supervisor Ammiano’s initiative to shift appointments to the MTA has no connection to any one of the statewide measures. The higher November turnout has moved this measure from very likely to pass to being a sure thing.

Other local government reform measures, such as Supervisor Peskin’s proposal for term limits for commissioners, will only be helped by the larger turnout.

In contrast, a proposed measure from Westside homeowners to require voter approval of water rate hikes beyond a certain amount could be seriously hurt by the increased November turnout. Since this initiative would repeal a prior initiative sponsored by Supervisor Ammiano, progressive groups are likely to oppose it, and the special election will bring far more progressives to the polls than would otherwise occur.

The Chris Daly sponsored gun control initiative was likely helped immeasurably by November’s now increased turnout. But a poster in Supervisor Mirkarimi’s office from his exhibit on the Black Panthers states that taking guns from people is the first step toward slavery—so progressives may not overwhelmingly support the gun ban

The special election will also impact campaign funding. As much as Local 790 wants the sales tax and the Transit Workers Union wants a reconstituted MTA Board, state and international unions are going to be focusing their funds not on local measures but rather on defeating the Governor’s budget measure and the initiative that prevents public employee unions from advocating for working people.

Organized labor, large Democratic donors, small grassroots Internet donors, and most anyone with money who is aligned with Democratic Party politicians will be prioritizing the battle against Arnold. Unless a progressive local initiative has a funding base independent of the above sources, this November is the wrong election cycle.

Keep in mind that politicians across the state have been planning electoral races in the June 2006 primary under districts that could be changed if the Governor’s reapportionment plan prevails. For example, San Francisco’s Assemblymember Leland Yee has spent nearly two years building political support south of San Francisco for a State Senate primary race against Mike Nevin next June.

Does anyone think that Yee and others in his situation are going to sit by and allow the reapportionment measure to potentially sabotage their political careers? These folks are going to their donors for a war chest to kill reapportionment, and this means less money to fund San Francisco slate cards and ballot measures.

The Governor has grossly miscalculated the political dynamics surrounding the special election. While Arnold’s initiatives do not involve hot button issues for conservatives (though some hope the parental notification initiative for abortions for minors will trigger such), they strike at the core of the progressive activist base.

The voters who will be going to the polls and are mad as hell and can’t take it any more are angry about the $45 million cost of this election, the attack on Prop 98, and the Governor’s attempt to cut health and anti- poverty programs by seizing unilateral control over the state budget. Add to this the opportunity to send a powerful message to George Bush and Karl Rove, and you have what pundits are already predicting will be a political disaster for a Governor already on his way out.

That last phrase may surprise some, as the media sees the Governor as using a victory in November as a springboard to re-election in 2006. But the best explanation for this election is that Schwarzenegger hopes to use a victory to ride off into the sunset having saved California from the unions and other progressive “special interests,” while a crushing defeat will justify his walking away having tried his best but failed.