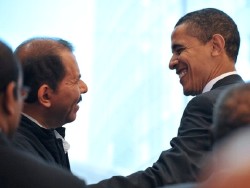 Many images during Barack Obama’s still brief presidency make his break from the past breathtakingly clear. The first was on Inauguration Day, when the swearing in of the nation’s first African-American President broke the highest of all glass ceilings. Another was the tearing out of the White House lawn and its replacement with an organic vegetable garden — a powerful cultural and political statement. But the most surprising image might have occurred last week, when Obama embraced Nicaraguan President Daniel Ortega, and asked Ortega not to hold past U.S. policies against him. Acknowledging United States wrongdoing in Nicaragua, even subtly, is essential forging a new beginning in Central and South America. Add to this Obama’s friendly exchange with Venezuela’s Hugo Chavez — who gave him Eduardo Galeano’s 1971 book, Open Veins of Latin America: Five Centuries of the Pillage of a Continent — and his entreaties to Cuba and one must ask: can Obama create a new world order for U.S.—Latin American relations?

Reaching Out to Ortega

Since the Monroe Doctrine declared in 1823 that the United States could treat Latin America as its backyard, we have overthrown the region’s democratic governments, backed dictators, and caused extreme human misery for millions. As recently as the 1980’s, the Reagan Administration declared war on democratic forces in Nicaragua and El Salvador, deepening poverty and forcing many to flee to the United States as political refugees.

Fidel Castro is the only Latin American leader that has been more reviled by the U.S. government and its compliant media than Nicaragua’s Daniel Ortega. Ortega headed the democratically elected Sandinista Party that won the presidency after a popular revolution overthrew General Anastacio Somoza, one of the United States’ favorite dictators

The Reagan Administration was outraged that Nicaragua had become a democracy whose leaders would be accountable to the nation’s poor. During the 1980’s it provided military aid to right-wing forces — both legally and illegally — seeking Ortega’s overthrow.Until last week, no American President was willing to reach out to Ortega, who is again Nicaragua’s President.

Barack Obama did more than reach out. He also acknowledged the United States’ troubling conduct toward Nicaragua, asking Ortega not to hold him accountable for policies that were implemented when Obama “was three months old.”

Skeptics will note that Obama was actually in his twenties when the United States funded military attacks on Ortega’s democratically elected government. But Obama was speaking metaphorically, and was basically saying, “I’m not responsible for the hostile policies of the past. Give me a chance for a fresh start.”

Not surprisingly, the New York Times focused on Ortega’s speech criticizing U.S. policy in the region. But if you want to see the warm reaction between Obama and Ortega, see this.

Obama’s outreach to Ortega was far more meaningful than his friendly handshake with Hugo Chavez. Not to diminish the latter, as the photo of the handshake was on the front page of newspapers throughout Latin America. Obama has already responded to conservative criticism of his Chavez contact by noting that Venezuela poses no threat to the United States.

But Venezuela’s public conflict with the United States only goes back to the Bush Administration. These bad relationships are easy for Obama to smooth over.

In contrast, the United States maintained troops in Nicaragua throughout the 1910’s and 1920’s in order to protect corporate profits. Our military overthrew a democratically elected Nicaraguan government, and troops left the country in 1933 only after having installed the Somoza dictatorship.

That’s what makes Obama’s overture to Ortega such a dramatic break from United States policy.

An End to the Cold War

While the Cold War is thought to have ended with the fall of the Berlin Wall, it remains alive and well in Latin America. The New York Times routinely uses Cold War, anti-communist rhetoric to attack Chavez, Bolivia’s Evo Morales, and any other democratically elected leader in the region that dares to consider nationalization — or redirecting resources from the wealthy to the poor — as part of their agenda (this continues despite talk that Obama should nationalize faltering U.S. banks!)

Obama’s attempt to forge a new relationship with Latin America challenges the heart of the bipartisan United States foreign policy consensus toward the region for the past 100 years. This is much bigger than Cuba, much broader than Venezuela, and offers a chance for the United States to finally be a builder, rather than destroyer, of democracy, economic justice, and the rule of law in the region.

In light of the political dominance of the Latin America left, Obama either tries to make the U.S. a productive ally or pursues Bush’s approach of ignoring constructive relations. It’s already clear which choice the new President has made.

As Obama repeatedly stated, actions speak louder than words. But by framing the issue in such terms, he has put the United States in a position of having to match overtures from once hostile leaders — like Chavez’s appointment last week of an ambassador to the U.S. — with constructive responses.

It’s a win-win for all concerned — except for the foreign policy establishment that profits from promoting a Cold War approach to Latin America, and will be trying hard to undermine Obama’s new regional agenda.